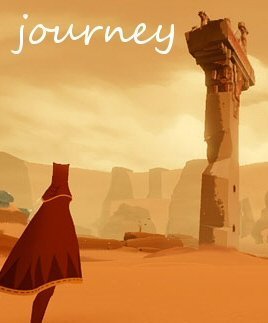 In the past few days since Journey’s release, I jokingly told fellow Stevivorites (Stevivorians? Stee-vivs? We need to sort this out ASAP) Trent and Steve that I could happily sum up my reaction to the game in two words; at least one of which would be enthusiastic gibberish. Apparently my new format wasn’t in keeping with the site (nor was my ’45-second interpretive movement piece review’ suggestion) so here we are to talk about Journey, in the Queen’s English!

Developed by That Game Company, Journey is a spiritual successor to their previous titles Flow and Flower, in that it embodies the same principles as those prior titles. Free-flowing movement, emotional engagement, a minimalist user interface and stirring soundtrack are the cornerstones of the game, and all in all it is an EXTREMELY effective combination.

You play the role of an unnamed desert-dweller in a red cloak, who seems to start the game as confused about his/her reason for being there as you are. With no tutorial, backstory or mini-map, the only point of focus you are shown in the sweeping desert landscape is the glowing peak of a distant mountain. With no other information available, your only options is to head towards it and try to learn more along…your journey.  You see how that title comes full circle? 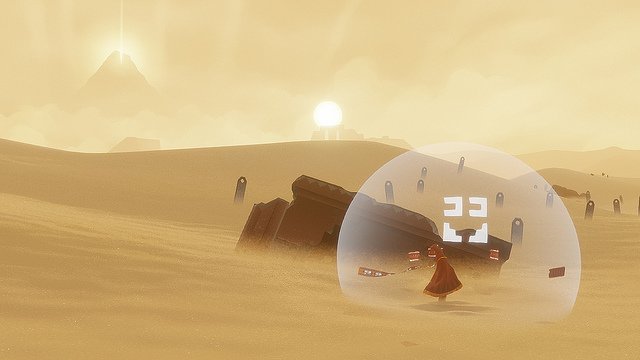 Subtle visual clues such as this are well-used throughout the game to slyly clue you in to your next objective.  Not long after the game’s beginning you are led to a small ruin with an artefact on its roof, being slowly orbited by scraps of red material very similar to that you’re wearing. Rarely in this game will you be explicitly shown what to do, but this first segment will show you how to use your ‘chime’ move, signified by a large unique glyph projected around you, to activate the artefact and add the first segment of the ever-expanding scarf that will trail behind you as you play. The scarf enables you to jump and fly for a limited time, controlled by how much of the scarf is covered in these glyphs, which can be recharged through these floating material scraps.

As far as tutorials go, that’s pretty much it for the rest of the game. By making your way towards the omnipresent mountain, you will be lead through a series of beautifully rendered locations with minor puzzles, hidden glyphs that can extend your scarf/flying ability, and wordless cutscenes that begin to tell the story of where you are and why you’re here. But that’s not even the best part of the game.

Journey has been described in some previews and coverage as ‘solo-multiplayer’. This mechanic allows crossover between yourself and other players in the game in a way that has not really been explored before. If another player is in the same chapter of the game as you, you will appear in each others’ worlds as a second, identical desert traveller. There is no clear indication of this drop-in, drop-out multiplayer until you actively notice someone else wandering through the level. With no voice support, text chat or even PSN usernames displayed, your only way to communicate with your new co-op partner is through movement and your chime ability.

I’ll admit I was surprised when I first spotted another player in the game, despite knowing it was a possibility. Despite the restricted channels of communication, it is easy to quickly develop a few simple commands that let you ‘talk’ to your partner. A few quick chimes for ‘look at this’, a long charged chime for ‘follow me’, and a non-stop chain of chimes for ‘oh crap oh crap enemy enemy oh crap.’ These simple tools allow you to help each other out, in addition to being able to recharge each others’ scarf power through proximity – encouraging co-operative play all the more. 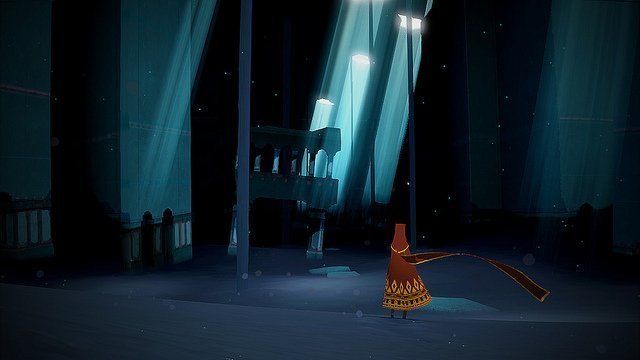 As you make your way through the game you will eventually pass through several unique environments, face overbearing enemies with the power to shorten your scarf, and finally reach your goal at the top of the mountain. Along the way you’ll learn just enough in cutscenes and your surroundings to get a feeling for the story being told if you care to, or otherwise just enjoy the ride. With a total playtime of only a few hours, it’s entirely possible (and recommended, by me) to play Journey in a single session.

At the very end of your game you’ll be shown a list of PSN usernames for all the people you shared your world with along the way. I was surprised to see six or seven names come up at game’s end, as I felt as though our method of communication had remained consistent throughout – I’d just assumed it was the same co-player the whole way through. The fact that this solo-multiplayer mechanic and the ability to develop language carries through so seamlessly is a clear indicator of this game’s quality as a must-try for all PS3 owners.