The Harvest Moon series has been around for some time, first debuting on the Super Nintendo in 1996 and making appearances on most consoles and handhelds in some form since then. It’s the grandaddy of all those “task-and-wait” style games — you’re looking at Farmville‘s ancestry here. Revolving around farming, repetitive tasks and marrying a generically-characterised partner, Harvest Moon has long been the king of the farm simulator field (albeit with minimal competition). The latest instalment is The Tale of Two Towns which first appeared on the DS, but has now received the 3D treatment and reappeared on the 3DS. 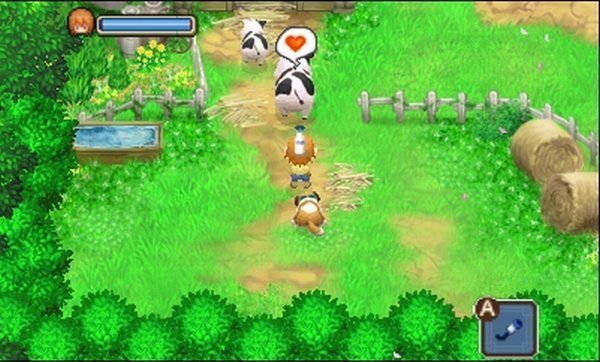 The basic premise of the game is the same as it’s ever been – you’re a new arrival to town, starting up your own farm. You’ll find yourself raising crops and livestock, attending town festivals and getting to know the townsfolk. The twist in this game is that you have the choice between two towns to live and work in — Bluebell and Konohana. The towns sit on either side of a large mountain, and once had a tunnel through the mountain connecting them. A rivalry developed between the towns however, and the tunnel was filled in many years ago. At the start of the game you and your horse-cart take a bit of a tumble, and you’re found by the mayors of the two towns. You’re prompted to choose which town you were traveling to — maybe not the most responsible thing to be asking a guy who probably has a concussion! Regardless, your choice of town will affect the style of your early gameplay.

Bluebell is a town that looks traditionally Harvest Moon and specialises in raising livestock, whilst Konohana looks more traditionally Japanese and is more oriented towards producing crops. Your hometown also has an effect on the events and festivals you’ll participate in. Whilst some festivals (such as cooking competitions) are shared between the two, each town also has its own calendar of special days. Despite the way the decision is presented, your choice of town is not final — a few gameplay weeks in, you can choose to switch towns with a few days’ notice. 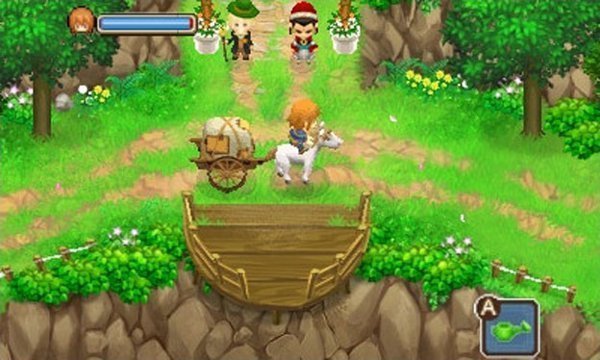 There’s also a mini-game of sorts within the game, in the form of townsfolk requests. These will regularly be posted to the town bulletin board, and basically amount to fetch-quests. Requests can range  from materials that can be found in the forest between the two towns, to crops or produce from your farm. You’re rewarded with more materials, cash or an improvement in your relationship with the relevant townsperson. Additionally, you will occasionally be tasked with raising funds to slowly open up the tunnel between the two towns as you develop relationships with the residents of both sides. This makes travel time between them much shorter, allowing you to accomplish more in each in-game day.

Beyond these story-related features, very little has changed from the basic Harvest Moon formula – let alone from the original DS release of this game. There are some new livestock types this time around such as Alpacas and Honey Bees, and as has been the trend in the last few titles you can choose to play as a male or female protagonist. A few 3DS-specific features have been added in this port, such as slightly improved graphical quality and a widescreen presentation for the device’s larger top screen. Petting minigames have been added to the livestock management system, allowing you to improve their mood more easily. You will also find a “StreetPass Box” that you can drop items into to share with other players you pass on the street, and a plot for crops that can share them over WiFi with your friends as well. 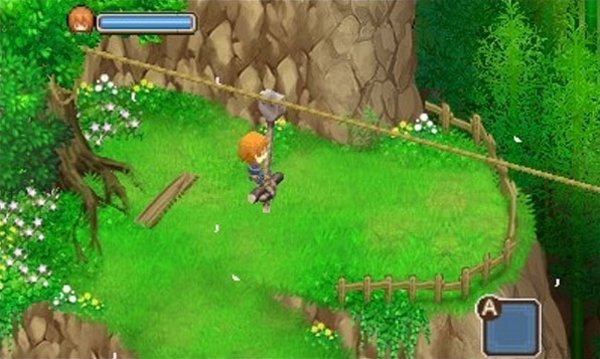 Sadly, the game does still suffer from a few failings. The start of the game is VERY slow going, with the myriad of required tutorials dragging on forever. To put it in perspective, an in-game day is made up of hours lasting 60 seconds. This gives you a total of 23 minutes per in-game day (6:00AM wake-up to 5:00AM automatic pass-out), and the basic tutorials take AT LEAST this long. You’ll also find no way to speed up the horrendously slow text speed, and the game will only display two lines of text at a time in its overly-large font – again, not adjustable.

Still, these relatively minor faults don’t detract from the overall gameplay experience. If you’ve played Two Towns already on DS I can’t recommend it – not enough has changed to make it worthwhile replaying. If it’s been a while since your last Harvest Moon or you’ve never tried it, I can’t recommend it enough! There’s no better way to spend your day than brushing a digital horse’s coat.