Matt and I got sucked into the Gears of War 3 hype; we started GoW 2 last week just to burn through co-op and reacquaint ourselves with the story. Then, because we used split-screen, my Gears profile corrupted two chapters before we both earned the Hardcore and co-op achievements. I wasn’t a happy camper.

Later, waiting for my copy of Gears of War 3 to arrive, it was reported that anyone who’d downloaded the game’s first Title Update would half-corrupt any saves made before that. Thankfully, if you’re affected you can still access your save and manually point to the right Act/Chapter that you left off at. Without going on a rant about proper testing before releasing Title Updates -– that’s what broke GoW 2 too -– I’ll just say that Gears 3 didn’t have a warm place in my heart as I started this review.

All is now forgiven.

Developed by Epic Games and published by Microsoft Game Studios, Gears 3 is the final instalment of the story (and subsequent bromances) of Marcus Fenix, Dom Santiago, and the rest of the COG Delta Squad. Up to 4 players control various members of Delta as they take it to two sets of enemies –- the fearsome Locust and the zombie-like Lambent.

The campaign does a solid job of tying up plot points and delivering a fun, action-packed experience. With Marcus’ torso being the size of a small car, you’d expect that Gears‘ writing is over the top…but it doesn’t need to be so heavy-handed. Case in point: Augustus Cole -– the Cole Train — played thrashball and now misses it. When finally getting the chance to play as the compelling character, I understood that without needing to be fed the same information time and time again throughout Act One.

Sadly, in an attempt to evoke emotion from the player, Cole changes from an interesting character to a repetitious, two-dimensional cardboard cutout; ironic, because a cutout of Cole features quite heavily in the campaign AND in Horde mode. He does get some balance back in later chapters, but only as a secondary character. Opportunity missed.

I won’t get into how or when Ice T’s character Aaron Griffin gets involved in the story, but I will question why he’s there at all. In the end, Griffin serves no real purpose. His sequence merely pads out the game — with little reward for our characters, I might add — and provides a chance to shoot more bad guys. I can’t help but feel his character was introduced so that Epic had some star power and ensured that Gears 4 has somewhere to go. Play through the campaign and let me know what you think in the comments. 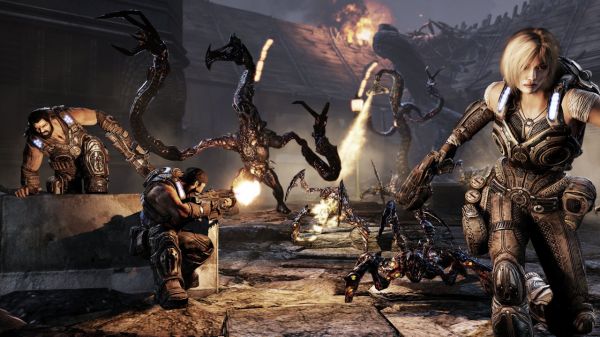 That Leviathan you “fought” at the end of Gears 2? That experience — amped up — will be akin to a mid-level boss in Gears 3. The campaign is definitely more challenging than in Gears 2, but the 4 player co-op helps to balance it out. When playing with AI, they do a much better job reviving teammates than in the past, and with 3 other gamers, you’ve definitely got the firepower and brains to take out whatever the game throws at you, even on Hardcore.

Through no fault of Epic, I found 4 player co-op with strangers on Xbox Live to be very annoying, especially in the new Arcade mode. Half the players you join with will only be interested in their own scores. If you need reviving, you’ll be ignored by partners who try to take out baddies first to maximize their own points; they’ll usually fail in the process, meaning you’re all thrown back to your previous checkpoint. Long story short? Get three good friends and actually play cooperatively for the best experience.

Before you ask, the game’s final boss is a bit easier than RAMM in Gears 1. That being said, be prepared to throw your controller against a wall the first couple times you try the last sequence; there’s some trial and error involved before you really understand how to progress unscathed.

Now, without getting myself in trouble here, Matt wasn’t a big fan of Gears 2; getting him to finish the story and try Horde mode was like pulling teeth. To him, it simply wasn’t fun. Not so for Gears 3, especially in the new iteration of Horde. Its tweaks -– fortifications, challenges, and the like –- really got him into it. Beast mode is just as exciting, and it was fun watching people experience the game for the first time. Just like at PAX, I found people slowly appreciated the usefulness of the Ticker over the larger soldiers when starting a round.

Out of the Versus modes –- Team Deathmatch, King of the Hill, Capture the Leader, Wingman, Execution, and Warzone – I enjoyed Capture the Leader and Team Deathmatch the best. CtL is a combination of Gears 2‘s Guardian and Submission modes, and flows much better. One player per team becomes the Leader of their squad and cannot be killed, only captured. The objective of the game is to protect your Leader while trying to capture the other team’s. The mode is truly fun, and very strategic. 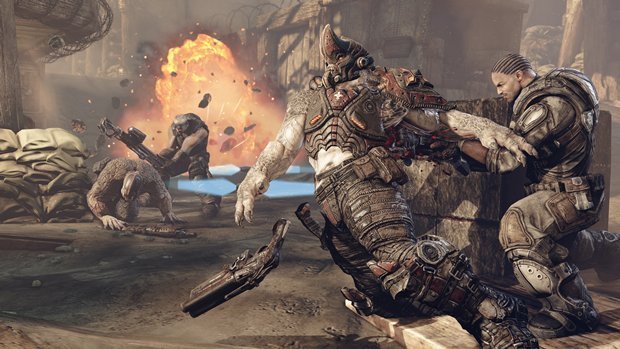 TDM is the default Versus mode and is standard fare –- both teams have 15 respawns and the objective is to kill the other team until their respawns and last lives run out. As the default mode, it’s an approachable entry point for the other modes, which admittedly require a bit more finesse. The game features a “Beginner Assistance” system for noobs that offers tutorials and general assistance to those who would otherwise feel over their heads. It’s a very nice touch to get one on their feet.

It’s hard to believe anyone would be on the fence with this one -– it is a must-play exclusive for the Xbox 360. The campaign has a lot of replay value; try a harder difficulty or give Arcade mode a go with co-op enabled if you haven’t. Multiplayer in its two main incarnations –- versus and Horde/Beast — are robust, challenging and fun, and even if you’re not winning. Granted, Gears isn’t going to win awards for its writing or innovation in its core gameplay, but just go along for the ride and you’ll enjoy your time as a COG very much.

Review stats: Gears of War 3 was completed in at least two-player co-op on Hardcore mode. 31 of 50 achievments were unlocked. Ten games of each multiplayer mode were played, with an average of 6 games won. Highest level achieved in Horde mode was 17, and highest in Beast 7.