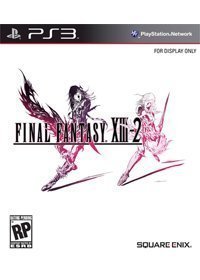 So here we are, almost three years since the release of Final Fantasy XIII and Square Enix has once again released another direct sequel to its long running Final Fantasy series. It’s no secret that Square Enix didn’t receive much a positive critical response for its original title. The question is however, was this sequel enough to redeem the series’ reputation?

Final Fantasy XIII-2 takes place 3 years after the events the first title. Lightning has mysteriously disappeared and everyone believes that she, along with Vanille and Fang, are holding up in Cocoon in the crystal pillar. Serah however knows the truth, and with the sudden appearance of Noel, sets off to find Lightning who is actually battling a mysterious male individual named Caius.

Now this is where things start to get confusing. Players of Final Fantasy XIII are not going to have too many problems understanding where the story begins. There’s enough there to stimulate their memory of their first long linear adventure. Newcomers however are going to feel left in the dark. Believe me when I say you will need to play the first title if you want to understand what’s taking place in Final Fantasy XIII-2’s plot. 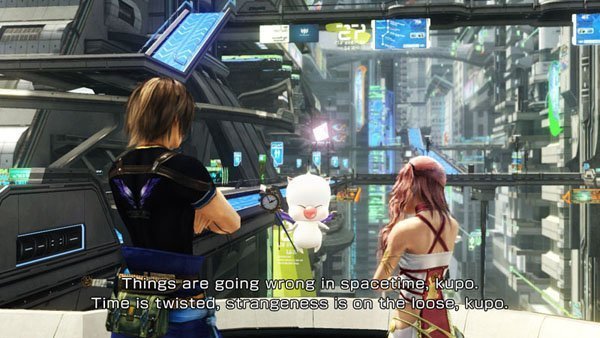 The main theme of FFXIII-2 is time. Serah and Noel visit a variety places, some familiar, others completely new and foreign. But what’s unique about the areas is that you will visit them at different points in their history and what you’ve done in the past in one affects what will happen in its future. At face value it sounds like a great idea, but I couldn’t help but feel it could have been better executed. While there are a variety of areas that you will get to see, a lot of them are the same location presented with slight differences. As a result Final Fantasy XIII-2 loses that large engrossing world that is usually associated with the series.

Combat (for better or for worse) at its core is the same system that you used in the first title with a few additions thrown into the mix. Players can now change party leader mid battle and automatically on death and Quick Time Events make an appearance as Cinematic Action sequences. The most notable change to combat however takes a page from the Nintendo’s Pokemon series. Serah and Noel have the ability to recruit monsters you encounter in the field as party members. Different monsters you find will have a paradigm class and unique abilities for you to bring to the battlefield and can be levelled by using items you receive from battles. It adds a completely new dimension to battle as you are restricted to three monsters and as a result three paradigm classes for use in battle. It means that you have to carefully balance out your party. Some players will take to this instantly. Personally though I prefer to have a party of characters where all members have a vested interest in the plot and there’s nothing there to provide you with that beyond succeeding in battle.

The music soundtrack is unfortunately lacking this time around. Most musical pieces that you’ll have during your travel are repetitive, not very memorable and my largest gripe: have lyrics. There’s no doubt that Final Fantasy’s soundtrack was at its peak when Nobuo Uematsu was composing its scores. Uematsu was able to convey the emotional context of any given situation in his pieces, FFXIII-2 however largely feels like a playground for experimental tracks and j-pop.

Vocal tracks are on par with its parent title. There are great moments where the voice actors really sell a performance. There is however moments where it feels like characters are talking just for the sheer sake of it trying to explain the latest twist in the plot. A possible result of the over convoluted plot in Final Fantasy XIII that required you to read the primer database to understand the details of the story. 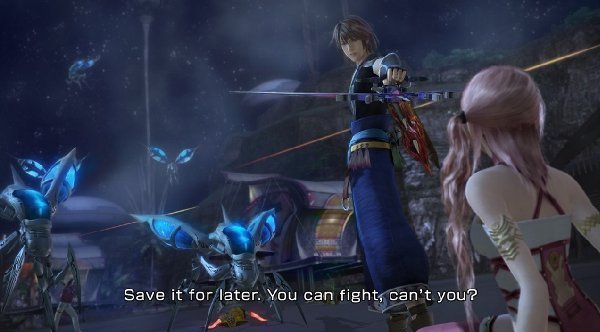 Final Fantasy XIII-2 feels very much like a fan game. A lot of how it was advertised was how it has been updated based upon fan feedback, but to be honest it feels like Square Enix heard but didn’t listen. The addition of the Casino area is reminiscent of Final Fantasy VII. Yes towns do make a return, but you can still only buy items from one, albeit annoying merchant by the name of Chocolina. It defeats the purpose of having a town in the first place leaving them feeling one dimensional.

The ability to jump has been added but it feels clunky. The prompts from the first game still appear to trigger unique areas that require the ability to be controlled by the game itself which bears the question: why provide the ability in the first place?

Open environments are a welcome change removing the linearity experienced before but it’s at the expense of the plot. New areas can be accessed based on how you play through the different areas and times. By playing in whatever order you see fit though you can miss connecting plot points in a title where following the plot is difficult enough as is.

At the end of the day though, Final Fantasy XIII-2 is an unnecessary sequel. The complication that gives rise to the purpose of Serah and Noels adventure wasn’t established at the end of Final Fantasy XIII. In fact it’s a very hollow attempt at extending the series and there are so many other routes they could have taken.

Fans of Final Fantasy are going to pick this up regardless. They want to know what’s happened to the characters they got so attached during their first outing on Cocoon and Gran Pulse. Newcomers to the series however are going to become frustrated and no doubt leave the title unfinished and move onto something more cohesive.

Final Fantasy XIII-2 is now available for PlayStation 3 and Xbox 360. Feel free to leave comments below or in our forums with your thoughts on the title.