In a market seemingly populated entirely by macho men shooters, Far Cry 3 is a mature breath of fresh air, not only for game design and innovation, but also for the series in which it takes place.

Right from the get-go, Far Cry 3‘s gritty and realistic tone is apparent. Jason Brody, the main character in the game, cries out in anguish and horror as he watches his military indoctrinated brother take the life of one of their captors. “I can’t do this, Grant,” he says, the sense of horror and guilt evident in his stuttered timid voice. Far Cry 3 manages throughout its entirety to hold you captive to its bleak and hopeless scenario. Jason is not a fan of violence, but he will do whatever it takes to rescue his lost friends, and that’s a message he conveys with ruthlessness and sincerity. 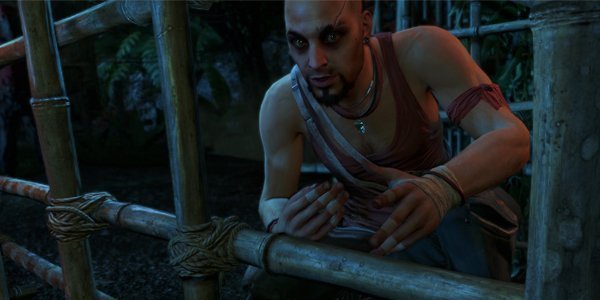 The characters in Far Cry 3 don’t even feel like traditional characters, because in reality they’re more like people. Jason reeks of entitled upper-class laziness and so do his friends. Their pre-paid lifestyle suddenly is turned upside down and then we meet the likes of Vaas — possibly the most fascinating character of this generation — and his boss Hoyt. The personalities and voice acting bring what could otherwise be forgettable performances into the spotlight, and make the player look forward to the unique interactions and their subsequent outfall. The manic outbursts of Vaas are contrasted by the calm and controlled Hoyt, each with their own evil agenda.

Immediately after escaping from the clutches of Vaas, Rook Island’s (the setting for Far Cry 3) local psycho inhabitant, Jason and the player’s experience snowballs out of control. Initially a pacifist of sorts, Jason descends into the clutches of violence and unbridled destruction, his very being morphing as the world around him does too. Vaas has kidnapped some of your closest friends, and it’s up to you to release them and ultimately escape the deceptive “paradise” of Rook Island. Upon escaping the clutches of Vaas and surely death, the game takes a handful of time to teach you how to survive in the new and hostile environment you’re calling home.

Jason can craft wallets to hold more money, pouches to hold more ammo, and even more weapons. The vivid flora an fauna that are scattered across the island can be used in a variety of ways, the animals to craft new gear, the plants to create healing balms, repellents, and even hallucination inducing drugs. The crafting system is a little menu heavy and convoluted as a result, but the survival aspect and utilisation of nearly everything at your disposal further builds on the idea of being stranded with next to no possessions. 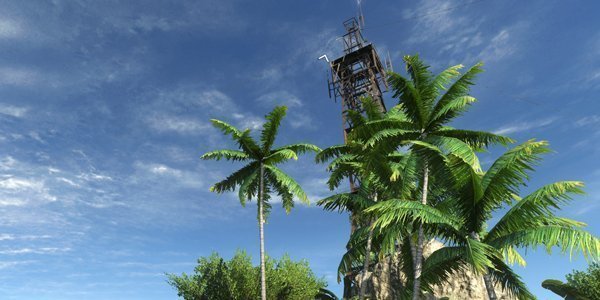 All of these skills (and many more) are taught to the otherwise untainted Jason by the Rakyat, Rook Island’s native inhabitants, and the tribal influence that has been promoted throughout the game’s production and marketing. The Rakyat help Jason tap into his more violent side, giving him the drive and abilities he needs to save those he loves. With the introduction of the Rakyat, we’re also introduced to Far Cry 3‘s admittedly clichè progression system. By completing actions and quests (hunting, killing “marked” targets, story, etc), Jason garners experience. When he levels up the Rakyat’s tribal powers allow him to progress a tattoo that adorns his left arm.

The tattoo has three branches; the heron, a specialist of range takedowns, the spider, a close quarters branch, an finally the shark, a purveyor of brutal assaults and guns blazing. Each has its own unique skills and flavour, all of which aren’t required to do well, but definitely aid you on your adventure. After not too long Jason turns into a “Rambo”-esque character, sliding down ziplines while he fires machine guns and torches buildings all around him.

Of course, Far Cry wouldn’t be Far Cry without the open ended nature and sandbox world it has always been known for. The non-linear approach that the previous two titles entertained returns once again, this time in a bigger way. Jason has a plethora of lethal weapons at his disposal, and for the first time the completely silent bow. Taking enemies out with stealth entirely is an option, or you could opt to light the grass on fire and burn the outpost down. Oh, wait, don’t you remember the caged tiger in the camp? Shoot the lock off and let the tiger do your dirty work for you.

Each encounter is unique in a way that the player’s skills, progress, and playstyle really does alter the way that you play. It’s not a cheesy marketing term, it’s a real thing, and the player really does choose how they want to do things. You’ll want to capture outposts, too. The Rakyat have been oppressed by Vaas and his bandits, so each time you clear a camp you gain access to free weapons and allies to take on raids with you. 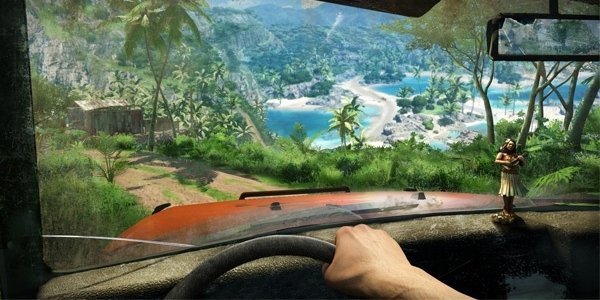 Although it feels like a bit of a forced inclusion, Ubisoft has included fully fledged multiplayer similar to Far Cry 2‘s. In the vain of Call of Duty, many of the maps are cluttered and twitch play orientated, removing the special strategic angle that the single player element goes for. This of course can be rectified thanks to the inclusion of an exhaustive and indepth map editor, something the community is sure to put to good use. While the inclusion of the multiplayer is nice, it’s incredibly easy to ignore in favour of more developed multiplayer experiences. While the single player takes huge strides in innovation, the multiplayer takes baby steps in a comfort zone.

Also included is a separate cooperative mode, providing a story-driven experience from another perspective. You and three buddies (trust me, you need four people) take the role of four other characters in some hilarious moments more centered around wanton destruction and chaos than character design and development. It’s fun, but not something you’ll come back to after you’ve completed it once, something that can be attributed to the poor design and AI scaling. At times it’s infuriating, while at others it’s a breeze.

Like I clearly said in the first sentence, Far Cry 3 is a mature breath of fresh air in an otherwise stagnant market. You’ll clamour to reach that next level to get that next weapon to see that next cut scene. You literally want to play more, just to get more involved with the incredibly dynamic world and its charismatic inhabitants. While you see Jason transform, you will to, an you’ll find yourself going from a sympathiser to a large doubter of his behaviour and evolution. Far Cry 3 is an experience any gamer needs to see to believe.