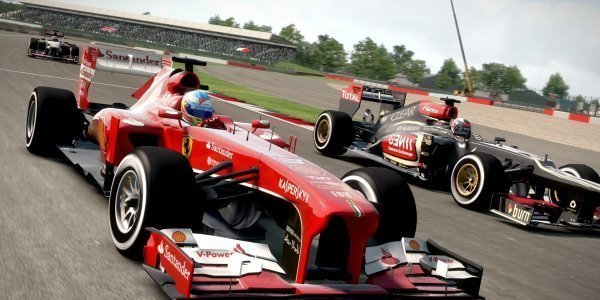 F1 2013 marks the fourth installment in Codemaster’s Formula One franchise. When I wrote my review for F1 2012 last year, I was confident that what I was playing was the best possible F1 game to date. It was a significant improvement upon F1 2011, and there was very little I could fault at the time. That said, I still felt like something was missing; for three years now, we’d seen Codemasters release what is essentially the same game. For this reason, I decided that despite my review of 2012 being extremely positive, I wouldn’t be so generous next time around; in order to rate F1 2013 as well as I did the games before it, that the developers would have to do something special.

When I found out earlier this year that Codemasters were introducing classic content in the form of cars and tracks, I thought that my prayers had been answered. Much like what has been done in MotoGP for a few years now, I felt that we were finally going to see more than just the stock-standard modern F1 experience. With F1 2013, in some respects that has turned out to be the case; in others, it has also turned out to be a tad disappointing.

Starting with the modern content, F1 2013 delivers what you’d expect: a solid and seemingly authentic racing experience. As I mentioned at the very beginning, this title marks the fourth installment in the franchise, and Codemasters have obviously gotten progressively better each time. The cars sound fantastic, graphically the game is top-notch, and the racing experience itself is also brilliant (I particularly noticed that the game was a lot tougher on illegal maneuvers, where I was told to hand a position back a few times when I had either hit my opponent or cut a corner during a pass). All this said though, it’s really what you’ve come to expect from Codemasters and there’s not much more I feel I could write that wouldn’t just be repeating what I’ve said in previous reviews.

In addition to the game modes that we’ve seen in the previous games, F1 2013 also features a new mode called “Scenario Mode”. This contains, as the name suggests, twenty different scenarios for you to participate in. These can range from gaining a few positions back after incurring a penalty, beating your rival in a wet race, or finishing a race on the podium to guarantee a championship win. Each scenario takes place with a different team on a different track, and acts as a nice way to get some exposure to the different vehicles and locations, but it wasn’t long before I started to find it all rather repetitive.

But I digress. What I really want to discuss (and what I know all readers who are thinking of picking up this game are interested in) is the classic content in F1 2013. Unfortunately, it is here that Codemaster’s latest addition starts to disappoint.

While there was no effort made to conceal this by Codemasters, F1 2013 only contains eleven older F1 vehicles and four classic tracks, and if I’m frank, this simply isn’t enough. While it’s all well and good that we now have some iconic F1 vehicles to race with, the selection on offer just feels… half-arsed. Why couldn’t the developers pick a specific year and provide all cars from that year, rather than pick and choose a combination across a decade-long gap? Any real F1 fan is going to want to recreate a classic F1 race, but when the entire grid is made up of one car from 1980, one from 1986 and three from 1988, it completely ruins the allusion. The same goes for the 1990s content as well. What’s worse, only the Classic edition of F1 2013 includes all the classical content, so owners of the standard edition will only have access to two of the tracks and the just 1980s cars. For our review, we were given the latter.

Sadly, this notion of a job half-done extends to the rest of the classic content in the game as well. Compared to the 20-event scenario mode for the modern vehicles, the scenario mode for the classic content only has three events to choose from. There’s also no pit-lane when you complete in time trials either; instead, everything is done from a static picture of the track. The damage models on the older cars are also extremely limited, where wheels will fall off in a high-speed collision, but the body panels remain in-tact. Now I don’t mean to sound cynical, but when Codemasters should have known that fans of the series were going to look forward to the classic side of the game the most, it just appears like this is the area they decided to devoted the least amount of time to.

I should note that while the classic content is fairly limited, the developers should be commended on doing a great job with what they’ve actually offered. Both Jerez and Brands Hatch have been re-created in stunning detail and it was fantastic to race on two tracks which aren’t featured nearly enough in modern racing games. The 1980s vehicles also provided a nice challenge too, where it was obvious from the very first corner just how much of a difference it makes not being able to rely on a lot of the aids that modern F1 vehicles possess. That raw power mixed with a noticeable lack of stability and traction control made for some fun while I tried to keep the vehicle straight and control the wheelspin as I mustered my way around the circuits.

All-in-all, by no means is F1 2013 a bad game. If anything, it is certainly the best installment in the F1 franchise to date, but at the same time, it isn’t a great title either. As I wrote at the beginning of the review, if I was going to rate any subsequent titles after F1 2012 highly, then they would seriously need to bring something new to the table, and while 2013 attempts to do that with the classic content, it just isn’t enough. Perhaps this is just me, but to justify a $80 AUD purchase each twelve months, Codemasters needs to go well beyond the current season of teams, cars and tracks. They should include the FULL list of teams and tracks from a classic era in F1 or even include the current season of a lessor championship (think Formula Ford, for example) – just anything to go above and beyond the offering that we’ve seen for four consecutive years now. If you’re new to the world of Formula One then F1 2013 is definitely a game to check out. If you, like me, have been along for the ride since F1 2010, then you can give this one a miss.