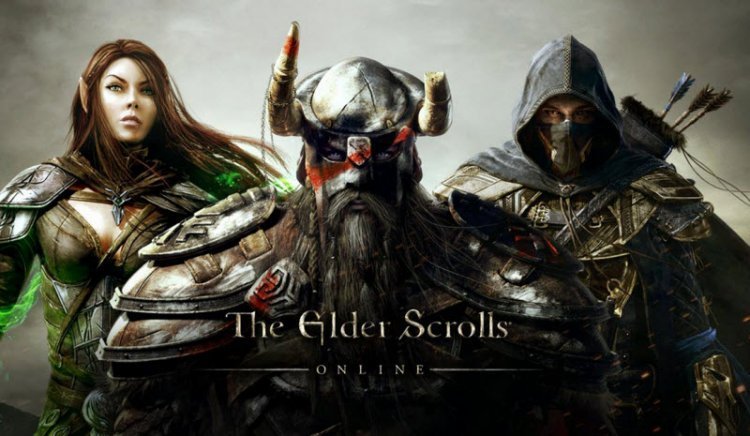 It’d be so easy to say I don’t play – nor understand – MMOs, and therefore, The Elder Scrolls Online is a mystery to me. Happily, it’s not.

Sure, it’s no Skyrim, but it’s a bit closer to it than the likes of World of Warcraft. Starting up in the game’s shared-class tutorial, you’ll find yourself in Coldharbor, imprisoned and on the verge of being sacrificed by a creepy cult. You’ll also be in the first-person view Skyrim and The Elder Scrolls is known for.

If that’s not your thing, you can easily pop out into third-person, but even that’s more The Elder Scrolls than a typical MMO; the camera sits closer to your character and with more detail than you’re perhaps used to in this sort of game. After finishing the tutorial, you’re placed in an area that corresponds to the faction you’ve aligned with. If you’re looking for the snow-capped mountains seen in Skyrim, go for the Ebonheart Pact. If you’d rather try something different, go for the deserts of the Daggerfall Covenant.

Those choices are made before the tutorial itself, a character creation system that’s fairly easy to use and customise. I went with a High Elf in the Ebonheart Pact, making him look like a bad-ass Mirror Universe Spock. Triangle-styled interfaces let you set your character’s body type – muscular, large or thin – and facial appearance – heroic, soft or angular. It’s quite fun to see what you can get out of it; I know a friend who’s made a character strikingly similar to Taylor Swift.

By the way, I do plan on asking Maude Garrett (of @GeekBombShells fame, of course) to jump into PvP just so I can set her Taylor Swift on fire. It’s only logical. Maybe I’ll try to make a character that looks like Harry Styles first… 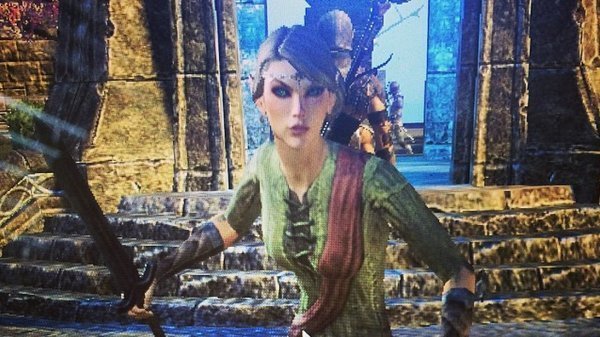 Anyways, there are four main classes to play as: Templar, Dragonknight, Nightblade and Sorcerer. As with Skyrim, you can initially set your abilities and access others outside your traditional skill tree through weaponry and gear. I went with a Dragonknight who normally wields a flamestaff; that way, I can take on enemies from afar, yet switch to a two-handed weapon if I want to get up close and personal. I’ve also taken on some healing elements so I can act as a temporary medic in a battle.

As you’d expect, Tamriel is absolutely huge, but the MMO nature of the game means you won’t be rewarded for exploration quite like you were in past iterations of the franchise. Quests, characters and loot are largely static to facilitate levelling up. You don’t need to find something cool, you just need to find someone with a triangle over their head.

MMO staples are part and parcel with the game; shops are plentiful, meaning you can buy new weapons and gear from NPCs or via trading with other players. If you’re looking for a horse to gallop around on, you’d best be planning to save your gold and then hit up a stable.

That being said, it was very much worth it when I found myself finally sitting atop a white stallion, with my faithful monkey-thing pet in tow. At that point, I started really wanting to fill in my own character’s backstory – how we got the horse, how he got the monkey-thing, why he decided to grow a goatee; all of it. I don’t know if that means I finally understood MMOs or not, but I was certainly having a good time.

I wasn’t game enough to join a guild in my first week of play, but I did party up with several players over select quests. Let me tell you, it was certainly easier for three level 5 players to take down a level 10 Log Roller than going it alone. We weren’t clever enough to communicate or strategise who’d be the distance fighter, the brawler and the healer, but we still got the job done nontheless. Those types of experiences really helped me understand why you’d choose to align with others rather than go about the game lone wolf-style.

In the same vein, I’ve not really spent hours and hours in World of Warcraft, but I found ESO’s Ebonheart full of life and vibrancy in comparison to other games in genre, be it from NPCs or others completing their own quests. My problem with MMOs usually is that they’re quite hollow, full of “collect this and that”-type quests and without a soul. I’m still getting some of that from the MMO-type nature of the game, but not to the same degree as Blizzard’s outing. I find myself coming back for more in The Elder Scrolls, probably due to the fact that there’s so much franchise lore that I understand and appreciate on top of it all.

In the end, The Elder Scrolls Online feels very much like an MMO rooted in The Elder Scrolls world, which is exactly what you’d hope buying the game, eh? Only a week in, I feel like it’s too early to issue a final score for the game, but let me say this: the fact that I’ve written this and still want to play the game means it’s an MMO that’s captured my interest.

Check back in the coming weeks for follow up articles that will lead to a final verdict. While you’re waiting, don’t forget that both Leo and Shane have written up previews of the game that you might be interested in.

With special thanks to Maude for the Taylor photo!