These days, it’s a good time to be a Dragon Quest fan. Last year brought us an excellent complete ground-up remake of Dragon Quest VII, now subtitled as Fragments of the Forgotten Past, in line with the tagline rebranding of each game in their Western releases. Now, a scant four months later we’re seeing the re-release of the PlayStation 2’s Dragon Quest VIII on the 3DS, making every single one of the flagship series games available on a current gaming system (barring the Japan-exclusive MMO Dragon Quest X). Given this is a series that Square Enix thought dead in the water for the English-speaking markets, it’s a remarkable turnaround in the last decade. So how does DQ8 fare in its new home?

Firstly, it’s singularly impressive to see an entire PlayStation 2-era game running on a portable system, let alone a NINTENDO handheld. True, hardware has taken leaps and bounds forwards since the PS2 days, but Ninty’s systems have never been known for their raw power. As such, it’s notable to see the game running so smoothly on the 3DS. While the graphics have been slightly downscaled from the original release, it’s counteracted by the smaller viewspace of the 3DS. The character and monster models have obviously been refined for their new release, rather than just a game-wide shrinking of its assets. Dragon Quest VIII retains all of the cinematic scope that set it apart back in 2000, with in-engine cutscenes mixed with pre-captured footage with minimal quality shock.

At its core, DQ8 is a fairly grounded tale – inasmuch as that is possible in a fantasy RPG. While Dragon Quest IX cast you as a fallen angel and Dragon Quest VII saw you resurrecting the continents of the world from the past, this is the story of a mere palace guard in the kingdom of Trodain. After a mysterious jester invades the castle and steals a magical artefact, unleashing a Sleeping Beauty-esque curse on the residents of the kingdom, the unnamed Hero sets out on a journey with the only other survivors to undo the damage – the King and his daughter Medea, transformed into a goblin and horse, respectively. Mysteriously untouched by the curse, the Hero is tasked by his King to chase down the dark jester Dhoulmagus and restore his home to its former glory. 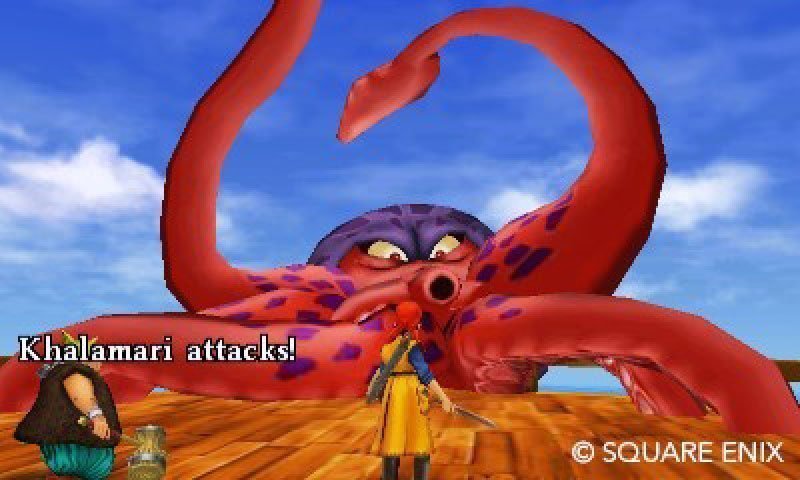 In action, the game is classic Dragon Quest with a modern-at-the-time twist. As the first game in the series to go full 3D, there is more of a focus on graphical fidelity and cinematics alongside the plot. The move to PS2 also enabled the game to have plot-oriented voice acting – a first for the series, and as-yet unique for any title in the series moving forwards. The voice cast embraces the series’ localisation trend of representing its characters as various subsets of English/UK accents, ranging from Cockney to posh Londoner and everything in between. While the Hero maintains the ‘silent protagonist’ trope, the rest of the party almost never stop chatting away when the plot is progressing. It’s an impressive feat not only for the PS2, but also in its recreated form on the 3DS. While the orchestral soundtrack sadly didn’t make it to the 3DS, all voice acting is included from the original game with a fresh coat of polish. Some characters’ roles have been expanded, while Jessica’s lines were fully re-recorded by a new actress to accommodate the extra dialogue in this expanded release of the game. As one who didn’t play through the original it’s no great difference to me, but it may be a sticking point for those returning to the game for a repeat trip.

The need for extra dialogue is created by one of this re-release’s biggest changes – the inclusion of additional party members. Red and Morrie, both existing characters in the plot of the original game, can now be recruited to your party as optional members. Each contributes something new to combat, allowing you to vary your tactics further: Morrie uses claw weapons and has abilities focussed on controlling Tension, the game’s system for providing rapid spikes in offensive capability,  while Red is the only party member to use fan-type weapons.

These additional party members aren’t the only changes in the 3DS version – many efforts have been made to streamline the game experience to be more friendly to the portable experience. Monster encounters are visible models on the overworld rather than randomised encounters, and the option to accelerate battle speed is available – a minor godsend, given how sluggish many of the game’s animations are. Tweaks to the story add an alternate ending as well as more fleshed-out story around the Hero and Dhoulmagus, giving the game’s plot greater depth. The game’s item-creating alchemy system has also been made instantaneous rather than taking time to ‘cook’ as you play, meaning you can quickly explore new recipes without grinding out combat (and your battery life). 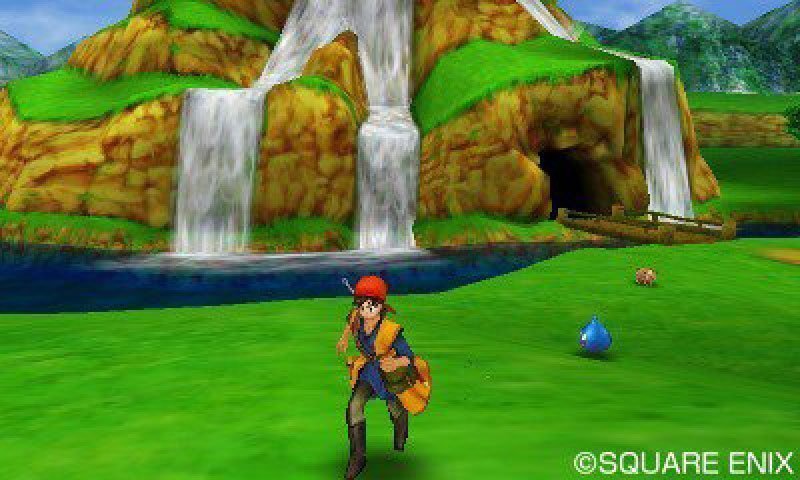 The grind however, is one thing that they couldn’t tweak out. Despite its unique position on the PS2, Dragon Quest VIII is still a Dragon Quest game to its core, with all the benefits and problems that entails. During your time with the Hero, you WILL be fighting endless battles and grinding well beyond any reasonable person’s enjoyment levels. While the difficulty curve in the game is fairly even-keeled, there are definitely points and bosses that will unequivocally inform you that you need to be a higher level to proceed. While the increased combat speed helps here, it doesn’t remove the tedium of auto-battling your way through dozens of enemies to get just that little bit stronger.

Even then, there are some concessions made in the name of more effective gameplay that aren’t exactly native to the series. The bottom-screen map is accompanied by a shortcut menu for things like the Zoom spell and summoning transportation without having to dig into the game’s archaic menu system. There’s also some interesting gameplay choices that tie it better to the story; while characters have always have stat/job proficiencies in line with their personalities, such as Yangus’ brutish nature being accompanied by minimal magic ability, DQ8 also acknowledges the Hero’s curious exception to Dhoulmagus’ curse by making him fully immune to curse moves in battle, complete with specific battle text that highlights this.

While it is a bit of an odd duck in the series – many of the unique elements such as voice acting were reverted in the subsequent release of Dragon Quest IX –  VIII it still holds a special place in the hearts of many gamers. The re-release also offers curious first-timers such as myself the ability to experience this hard to find gem in its full glory, rather than the tweaked versions available to smart devices. If you’re ready to stomach some old-school hangups with your goofy fun, this one’s worth a look.

Dragon Quest VIII: Journey of the Cursed King was reviewed using a retail copy on 3DS, as provided by the reviewer. Click here to learn more about Stevivor’s scoring scale. 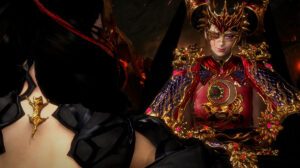 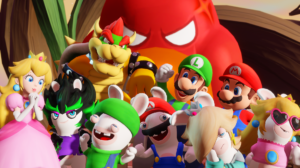