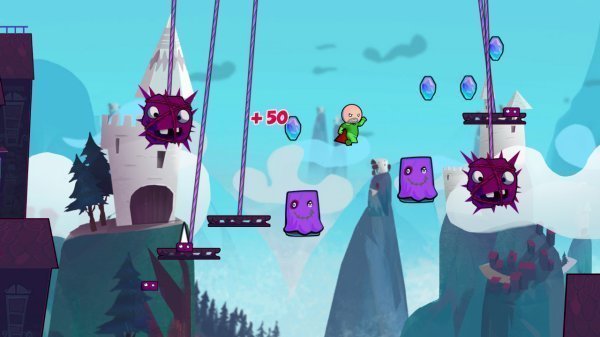 You’d be forgiven for disregarding Cloudberry Kingdom as just another flash-type platformer. It looks and sounds just like many others and, on the surface, doesn’t appear to offer anything new. To overlook it would be a mistake however as, whilst it’s presentation is generic, the game is ingenious, innovative and addictively fun.

What makes it special is the automated level generation. As you play the AI analyses how you perform then uses that information to generate subsequent levels. If you speed run every level then the next ones will contain obstacles forcing you to stop. If you die 47.5 times on some tricky lasers, then they will be fewer next time around. It’s a clever concept that Cloudberry Kingdom executes perfectly. At no point did I feel the the game was creating unrealistically difficult or easy levels yet I was constantly challenged and forced to mix my strategy.

This works well as Cloudberry Kingdom is structured with short, fast levels; a concept normally more at home on a mobile platform. Each level can be completed in around 15 seconds and death results in an instant respawn meaning there’s no break in the action. Whilst great for giving you the feeling of progression the fast play style is a double edged sword and tends to encourage recklessness.

The levels are pretty standard fare; Cloudberry Kingdom is a 2D platformer where your goal is to make it from the starting point at the left to the exit on the right whilst jumping on platforms, avoiding obstacles and collecting crystal coins. To keep things interesting there are a bunch of different augmentations that can/will be applied to your hero. Sometimes you’re on a pogo stick horse that won’t stop jumping, other times you’re strapped to a wheel equipped with a jet-pack or another time you’ll be in a box and only able to jump! There are a bunch of different transformations all of which drastically impact the way you navigate levels.

Cloudberry Kingdom’s focus  is clearly the platforming mechanics so, unless you’re a fan of the genre and up for a challenge, there’s little to keep you interested. There’s next to no game lore and what little story there is gets presented in short, uninteresting cut-scenes unrelated to the surrounding levels. It almost feels like someone had a check-list of things to take a game and make it marketable. The style, jokes, pop culture references, music and structure all denote the general feel of something we’ve seen done again and again ad nauseam. Whilst not overly important it does give the game an unpolished feel and could prove a deterrent for those unfamiliar with its genius.

But the presentation isn’t the big drawcard for Cloudberry Kingdom so who cares? The reason you’ll end up hooked is the sheer fun and challenge the gameplay presents. Aside from the few hundred levels in story mode there are the infinite arcade and free play modes. Arcade mode consists of over 20 different procedurally generated types of challenges each with special conditions and global leaderboards.  Conditions vary from time limits to changing augmentations or strange environmental conditions. No matter what the condition each mode feels different and varied enough to keep things fresh and interesting.

Free play is Cloudberry Kingdom‘s sandbox mode. You set environment, enemy and hero variables then let the AI take care of the rest. The great part about this mode is that the AI uses the same parameters it does for the other modes meaning your experience will still be challenging but fair. It would have been nice if you could upload your customised modes and have friends try and beat your score but I suppose we can’t have everything. Another feature I felt it lacked was the ability to play online coop. The game sports some fantastic coop modes but the local restrictions mean many gamers will miss out on the experience.

Despite the AI’s ability to play fair Cloudberry Kingdom can still be a frustratingly difficult game. Similar to games like Super Meat Boy a large part of this is learning how to play, overcoming temptation and getting used to the fast paced nature of the game. There were many times where I’d hit a virtual wall, continually dying in the same spot until I just had to give myself a break and try again later. Fortunately even seemingly impossible levels have a resolution and you’re even given an option to see the AI complete a level if you get stuck. The one downside with the procedural generation was that there’s a discernible pattern so, after a while, you learn the format and can run thru “blind jumping” when you know the timing is right.

All in all Cloudberry Kingdom is a sensational game and probably one of the best platformers I’ve ever played. Whilst it’s paced more like a mobile game than a traditional platformer it has plenty of extras to keep any 2D jumping fan sated. Great fun but, in my opinion, not something you’ll love unless you like a challenge and are willing to sacrifice game polish in it’s favour.