Biomutant is the first title from Experiment 101, a THQ Nordic studio that’s comprised of developers behind the likes of Mad Max and the Just Cause franchise. Despite the studio’s pedigree, Biomutant is a different beast altogether — pun very intended — an action RPG that’s impressed players with its stunning, anthropomorphic visuals for some time now.

It has a lot on offer, and while RPG fans will find a number of systems they’ll be enthusiastic for, I’d wager they’ll find equal parts unappealing or overdone.

Set in a post-post-apocalyptic world, the tale begins in a world that’s ravaged by humans. Years beyond whatever combination of negligent warring or climate-changing events caused our own demise, animals have now evolved and find themselves running the show. The meek shall not inherit the earth in this instance, as the slightly radioactive state of things means the beings at the top of the food chain possess ridiculous abilities as if they’re the next generation of X-Men. While the world is healing in some aspects, it’s not beyond danger; the all-important Tree of Life is at risk from four menacing World Eaters. On top of this cataclysmic threat, a number of warring animal-people tribes cannot find middle ground with one another to mount a proper defense.

This is where you step in, a mold of an animal hero that you as the player help to fill in. Unless you’ve pre-ordered for an extra option, you’ll have one of five classes to choose from, with in-game tooltips suggesting some are better suited for ranged combat while others are meant to get up close and personal using melee attacks. I went for Psi-Freak, a class I assumed would be better suited for long range, mutagen-enabled attacks. As you select where to throw your ability points, including those that will give you extra resiliance in a specific biome, the game’s narrator begins to speak with you.

He never stops from this point on, commenting on the situation at hand, NPCs that you come across, the weather, the dumber-than-you animals that you decide to capture and tame as mounts, and every single conversation you’ll have in-game. Everyone speaks Simlish — or a close approximation therein — so it’s up to the narrative to tell you what’s up. You’ll very quickly tire of hearing the phrase, “he says” as it comes up a lot. Randomly, the narrator will also break quick silences telling you that your mount is crazy and unstable… as it continues in a measured, straight line towards wherever you’re pointing it at. 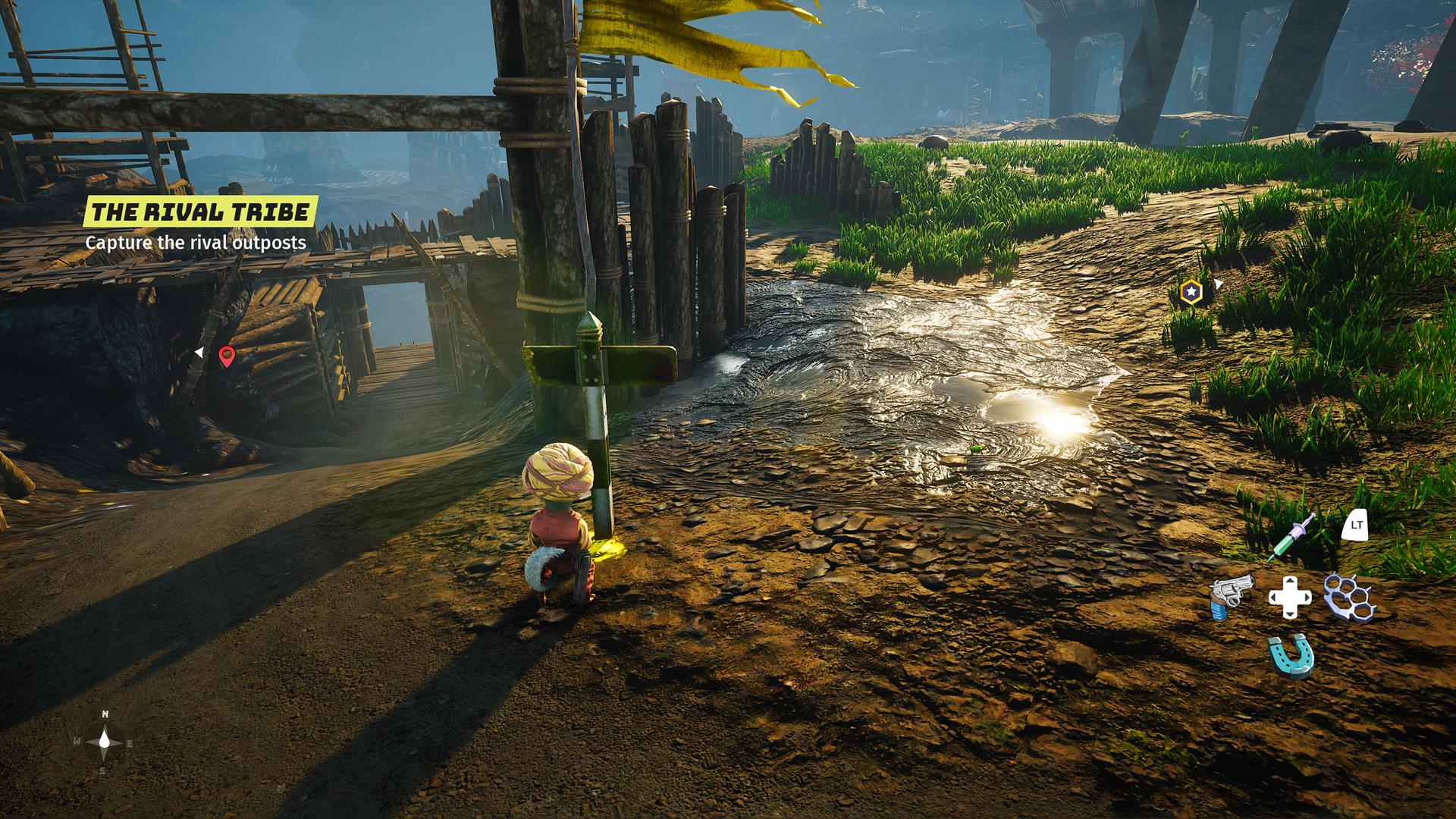 While I believe Experiment 101 was intending for its narrator to have the same charming effect as the one in, say, Fable, it doesn’t hit the mark. So much so that multiple hours in, Biomutant seemingly realised this and threw up a loading screen tooltip that revealed one can turn down the frequency at which the narrator blabs in your ear. I appreciate the ability to quiet him, but it has to be said that his default setting needs some work (and also, PSA that you can do this earlier than I realised). Similarly, a reliance of pee and poo jokes annoys me just as much as the narrator; the first World Eater (as seen on Conan!) eats you up, poops you out and then sits on you to shove you back up his butt for good measure. Okay, then.

For some reason, a few of the game’s characters get to avoid Simlish; the angel and demon that ride upon your shoulders are two of those exceptions, each representing one side of Biomutant‘s morality system. While Experiment 101 claims that the light and dark auras are more shades of gray than binary states of mind, I’d tend to disagree. Tribes are also introduced to the player along the same lines, and one of the first is described as one that wants to cleanse the world of weak and feeble to make way for a superior master race. While that’s absolutely straight-up nazism, you’re nonetheless encouraged to explore if becoming a scab of a person could somehow do good in the world. Given the state of our actual situation in life, I hope most of us would decide against that course of action.

With your character and tribe selected, morality explained, a couple ‘you as a child’ flashbacks taken care of and the ever-present narrator in your ear, you’ll finally set off into the world to bring other tribes under your heel, at the same time hunting down the nefarious World Eaters. The open-world nature of the game may lead you to believe that you can venture out and complete things in whatever order you wish — to the extent that Experiment 101’s Creative Director, Stefan Ljungqvist, called the game “like Zelda: Breath of the Wild… [with feedback suggesting it’s] a strange, weird, good mix between Ratchet & Clank, Devil May Cry, Batman: Arkham, and a couple of other influences” — but that’s not exactly the case. 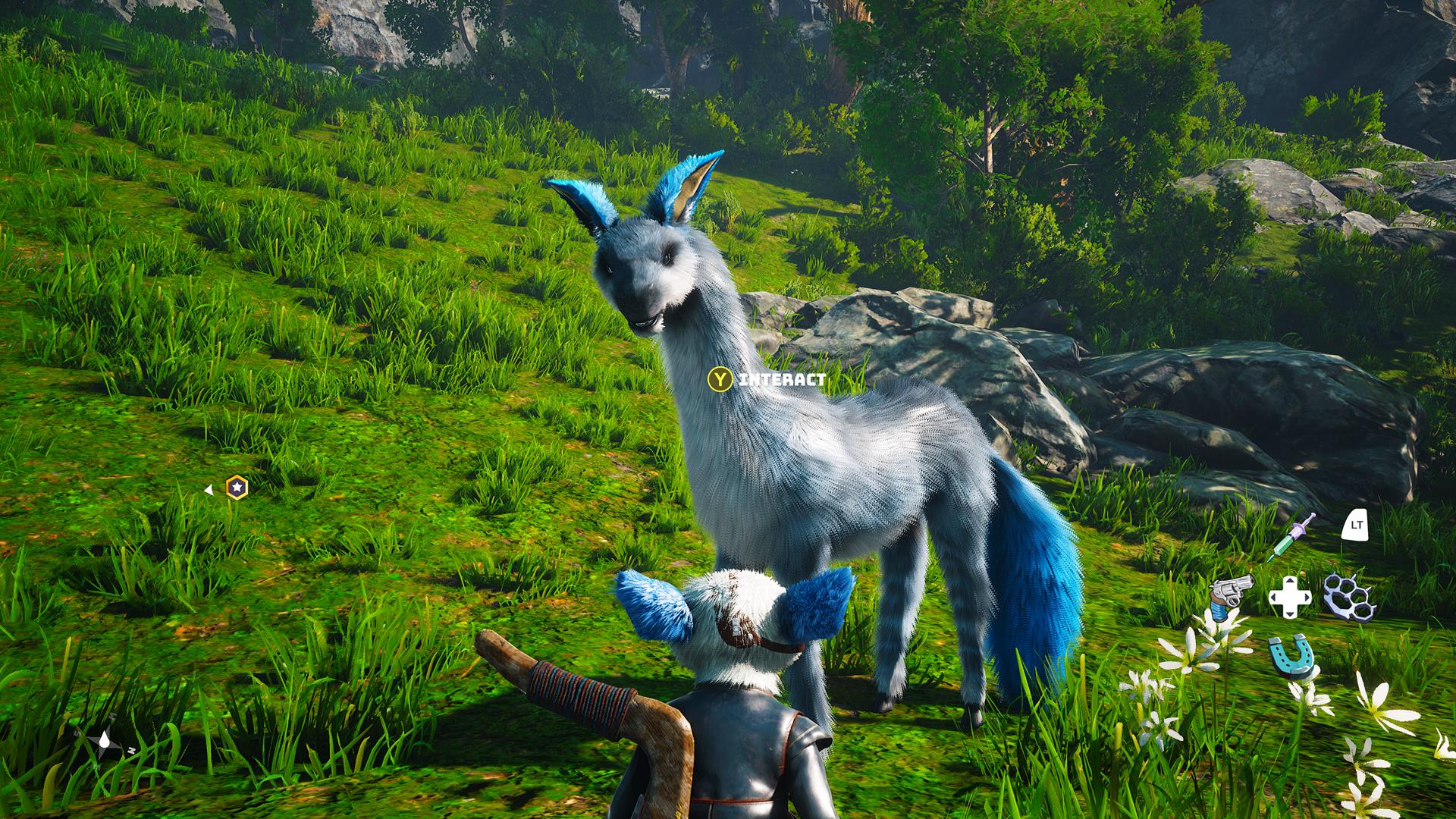 The biggest hurdle by far is the biome system, in which an environment can quickly kill you if you’re not equipped. The first such biome that you’ll encounter is an oxygen-deprived wasteland that requires you to complete a quest that provides a mech to safely traverse it. I didn’t realise this as I set off exploring, little by little painting myself into a corner as I ventured into an area literally surrounded by said hazards. Biomutant never explained what I’d need to survive — or maybe it tried to, but I was too busy smashing buttons to quiet the narrator and didn’t notice — nor did it later tell me that I could spawn the mech at dotted locations throughout the map; instead, I eventually found the mech and made the slow, long slog to side-missions and, eventually, one of the World Eaters themselves.

Combat encounters featured myriad tooltips, and most of my Psi-Freak character’s seemed to suggest I should hang back and use guns and my mutant abilities — a lightning orb and fire dash — as my primary tools. Up against groups of five or so, I’d valiantly loop around a target, firing my weapon and resorting to lightning when my piece needed a reload, also dodging and using quick-strikes if enemies got too close. This was effective, but boy oh boy did encounters sure take a while. Others were seemingly impossible, with ant-like creatures that managed to regenerate health faster than I could chip it away using my tactics.

Truly, Biomutant seems to be about melee attacks first and foremost, with those primary attacks then relying upon weaponry and powers as flourishes. Once I learned that, combat became reasonably fun, though at times resorted to becoming a button-masher. It’s a bit strange — you’re managing three distinct sets of upgrade points (using separate ungrade systems) but melee just always comes out on top, at least in my experience. I’m not sure how the Dead-Eye or Commando builds — ones seemingly meant for weaponry — alter things, but I’d wager that the Saboteur or Sentinel classes are the best way to play. That’s kind of a shame given all the choice you seemingly have. 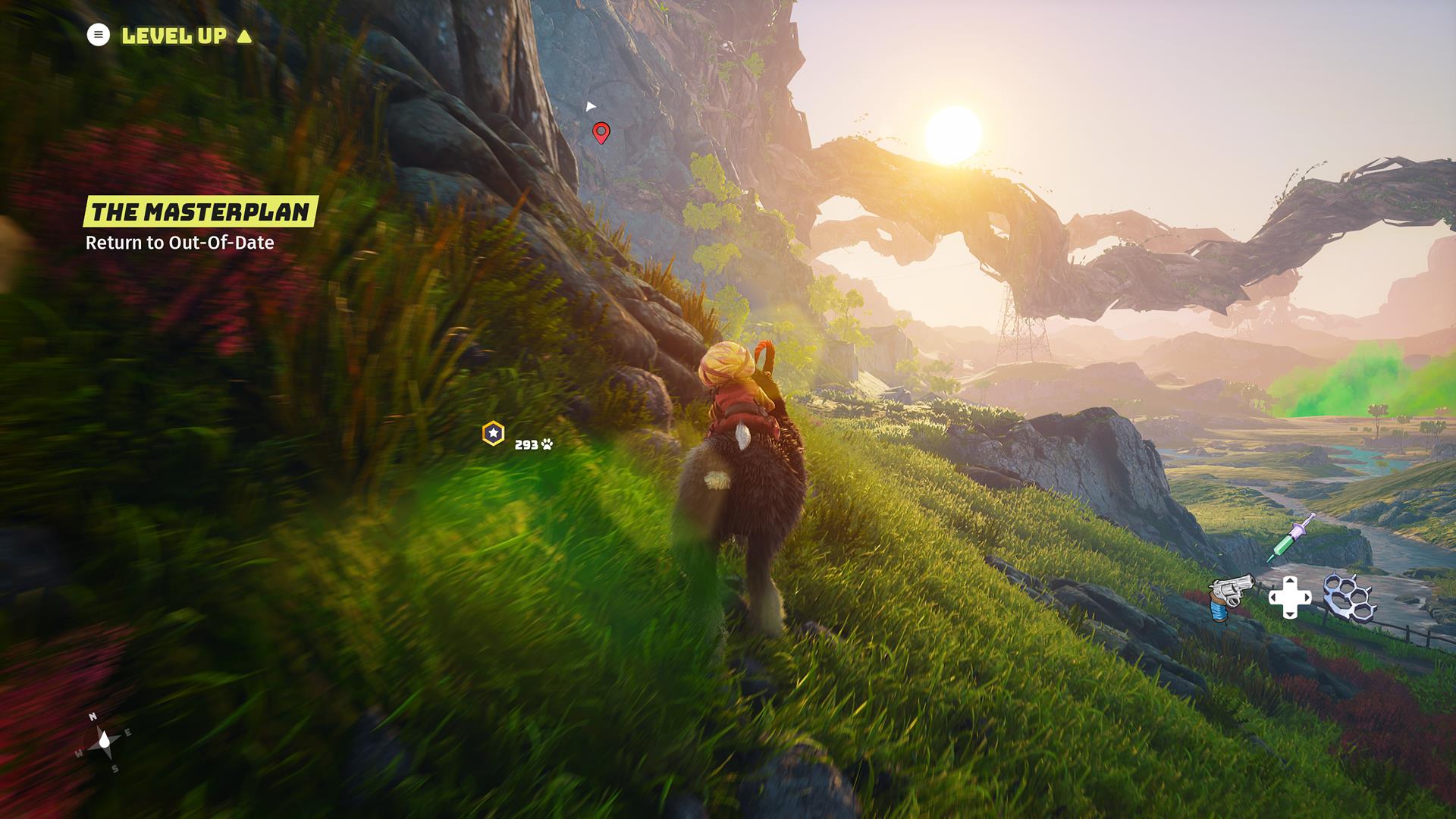 That aside, it needs to be said that Biomutant is absolutely gorgeous. There are lush patches of vegetation dashed with derelict factories full of glowing ooze and oil slick dead zones that all leave a very distinct impression upon you. If you’re patient enough to work within its systems, be them allocating combat points to find better builds than I did or simply to craft extra bits onto your found (or earned) gear, diehard RPG enthusiasts will likely have a better time than I. Similarly, those who love exploring (when they’ve the full toolset to do so) or collectible hunters will also find joy within.

Biomutant ultimately wants you to invest a lot of time and effort in it, and I found a lack of willingness to do so. Some of that comes from its presentation, some from a heavy-handed story about the footprint we’re leaving on our planet, but mostly it’s because there’s a lot going on without the focus required to have it all come together. Ultimately, playing it made me yearn for more Mass Effect Legendary Edition instead.

Biomutant was reviewed using a promotional code on Xbox Series X, as provided by the publisher. Click here to learn more about Stevivor’s scoring scale.