With console and PC versions, single-player and co-op campaigns, a genre-defining multiplayer and inevitable comparisons to that OTHER series, there’s a lot to cover in DICE’s Battlefield 3.

I’ve had limited exposure to Battlefield, but tried to sort that out by playing Battlefield: Bad Company 2 in the last couple months simply because the hype for this game demanded I do so. After all, one doesn’t want to appear like a noob in a review like this, right?

Turns out, I didn’t need to play Bad Company 2; this game is an entirely different beast.

In Bad Company 2, maps turned to Swiss cheese when you were done with them. Why walk around a building when you can blow a new path straight through the middle of it? Not so in Battlefield 3. In a move to take the wartime FPS crown from Activision and the Call of Duty: Modern Warfare series, BF3 has gone full-Hollywood. They’ll control the explosions in the single-player campaign, thank you very much.

Environments are still destructible, just not to the same degree as in Bad Company 2. You don’t need to make a path through a building because the game throws NPCs at you that lead you exactly where you need to go. Your objective in the campaign is to push forward, stick with your unit and clear out anything that gets in your path. Along the way, you’ll encounter some amazing set pieces and the occasional quicktime event – though, for all the work my character was doing in those events, I expected to have to press more buttons.

Similarly, I loved the chance to play in a tank for two missions, where I had full control over the vehicle and its armament. Disappointment sets in comparing that to the stint in “Going Hunting.” You start off expecting to control the fighter jet you’re in; you end up merely pressing the occasional button to launch flares or fire a missile or two as the jet soars through the sky on rails.

The emphasis in the single-player campaign is squarely on the presentation of the experience. You’re a soldier, a tank operator, a fighter pilot, a sniper…the list goes on. With the Xbox 360 texture pack installed, the game looked as good as the PS3 version (to me and my untrained eye, anyways). Lighting effects, especially in “Operation Gullotine” and “Night Shift” made me feel like I was playing on a high-end PC rig. EA and DICE hyped up their Frostbite 2 engine as a mechanic to play next-gen games on this generation’s hardware, and I support that claim. Combine those amazing visuals with gorgeous sound design — guns never sounded so real (pro tip: if you need an excuse to buy some high-end gaming headphones, this game is it) — and DICE can walk me down any linear gameplay path they’d like.

These changes to the single-player campaign look to be DICE’s attempt to align themselves to the Modern Warfare-style of play to show gamers they can do it better. I’m not going to offer a direct comparison here. Instead, I’ll say that Battlefield 3 had its over-the-top moments, but it still felt more realistic than other games I’ve played.

The linear nature and Hollywood-style set pieces of the single-player campaign extend over to the 4-player co-op mode. Some environments are recycled, but for good reason; as enemy damage is increased, knowledge of your surroundings is key in order to find good cover. Teamwork is paramount, especially if you take too many rounds to the chest and find yourself in “man down” mode; if you’re down and bleed out, it’s game over for you and your co-op partners.

In “Hard” mode, either in single-player or co-op, you’ve just got to be patient, keep in cover, and fire off a couple good shots before going into cover again and repeating the exercise. Enemy numbers largely stay the same between difficulty modes, but their precision greatly increases as you move from “Easy” through to “Hard.” To survive, you may find yourself in a bit of trial-and-error to pass a difficult section, which can get a bit frustrating. Memorise the scripted paths of your enemies when you’re stuck, and you’ll come out okay – sometimes linear modes have a silver lining, eh?

The single-player and co-op campaigns are the perfect primer for what gamers consider the real meat and potatoes of the Battlefield 3 series – its multiplayer. I was getting my butt handed to me in every game I played before finishing the single-player. After completing it, I felt far more prepared to handle tanks, utilise cover effectively, and pull off better run-and-gun shots.

Multiplayer consists of Rush, Conquest, and Deathmatch modes. Deathmatch has been done time and time again on every multiplayer mode under the sun; Conquest and Rush are the modes that define Battlefield 3. Conquest involves moving around the map, capturing and holding various control points. If you kill enemies, they lose spawn tickets; if you hold a majority of control points, your enemy starts to bleed spawn tickets. It’s a great mechanic, meaning that if you’re not so great at killing, BF3‘s multiplayer still is enjoyable as you can help your team over the line by capturing control points. Even then, if you’re not stealthy enough or a crack-shot, you still can provide support to your team as an Engineer or Medic. 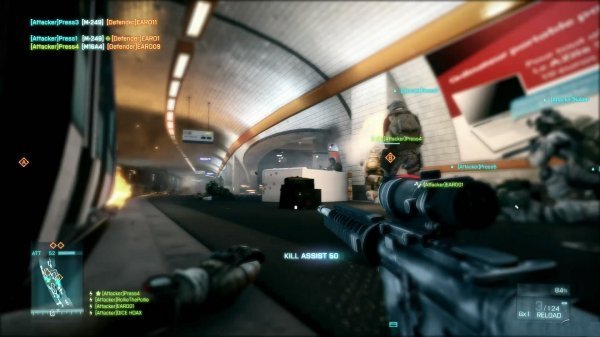 Rush involves one team defending two M-COM stations, and the other trying to destroy them. If both sets of stations are destroyed, two more spawn up the map, and the objectives begin again. Maps played in Rush feel and play much different than they do in Conquest, meaning you really need to shift your strategies depending on the mode you’re in. Another pro tip for those starting out in either mode: always spawn on your teammates, never a control point. Work together whenever possible, and you’ll come out on top.

While the PC version can offer up multiplayer with 64 players, I was quite happy playing alongside 23 others on my console. The maps on the console versions are a bit smaller than their PC counterparts, but even then, they’restill huge. If you’re playing “Caspian Border,” be prepared to learn how to fly a jet, gamers – otherwise, you’ll spend 5 minutes running across the map, only to get killed andhave to repeat the process.

Best yet? Even on a console, things explode REAL good; if you’re wanting to blow holes in buildings, you’ll have a better chance in multiplayer than in the campaign.

The new Battlelog is be essential to PC gamers — you can find servers and jump straight into a reserved spot. For console gamers, it’s just a bit of extra fun. Comparable to Bungie.net’s Halo offerings, Battlelog is a great place to see your co-op and multiplayer stats. As they update in real-time, it’s an overlooked but useful accessory to the overall Battlefield 3 experience. I personally use it to see where I’m at with item unlocks to plan strategies for my next match. If you haven’t signed up for Battlelog, go and do it now. Head on over to the Stevivor.com Platoon once you’re done.

Overall, there’s a lot to do in Battlefield 3. Because of the new, scripted nature of the campaigns, their replay value is shot; firefights all play out the same. Multiplayer makes up for that in a big way – with at least 24 gamers playing at one time, you’re never going to have the same experience twice. Battlefield 3 is a robust title that’s sure to have a little something for everyone, and if DICE can marry their campaigns with the all-out carnage that made Battlefield: Bad Company 2 a hit, they’ll be on their way to a perfect experience.