We get down and dirty on what to expect from the franchise.

Saints Row was today announced by Volition and Deep Silver, a reboot of the popular franchise. Ahead of the reveal, Stevivor was able to sit down with senior Volition staff to discuss this new take on the Saints.

Saints Row as a reboot

“Saints Row is a reboot. This was a chance for us to go back to our origins and get back to that more contemporary crime sort of angle that we love and that Saints Row is known for,” said Chief Creative Officer Jim Boone.

“It was a great opportunity for us to just tell the story that we wanted to tell, and most importantly tell a story that is contemporary — that we think the people are going to relate to.

“What that means is, it could be everything from imagining the kind of debt that people deal with these days — student loans or the kinds of things that you want to be able to do for the American dream — imagine that if you were in that world and you could form your own criminal empire. You could be your own boss and do things your way.”

In this newly envisaged world, four friends are doing just that. Lead by The Boss, the character that the player will fully customise and experience the story through, these new Saints will duke it out against three rival factions in the fictional city of Santo Ileso to become top dogs. 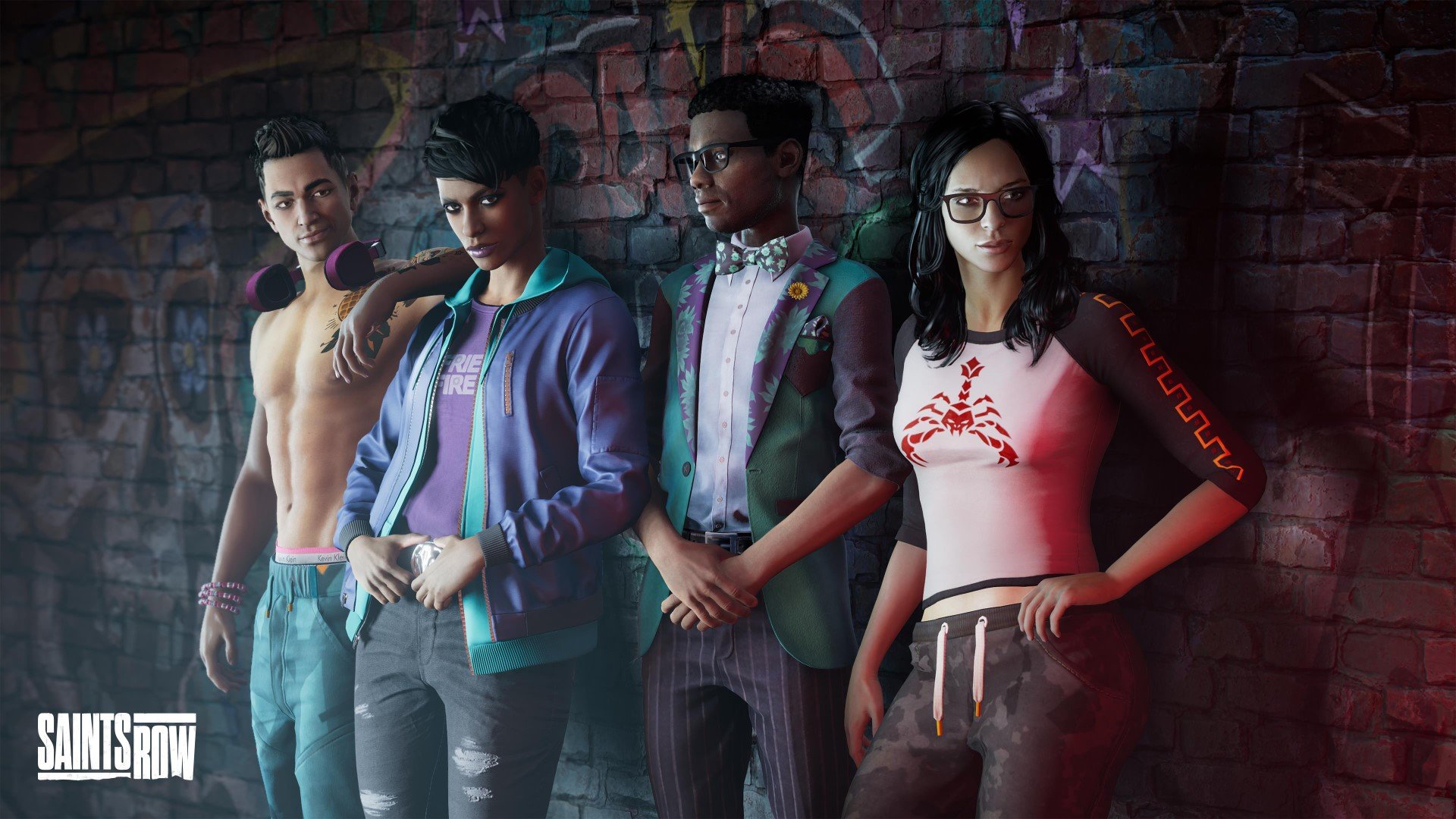 “It’s a power fantasy for players to be able to have that same sort of experience where they are building a criminal empire and doing things that you would never do in real life,” Boone continued. “But having fun and doing it your way in the game.”

“We definitely did less of the of the wacky partly because it was a conscious decision on our part to go back to more of the criminality that we feel is so important in Saints Row,” Boone told Stevivor directly.

“Part of it was just even thinking of where we left off on Saints Row 4,” he continued, “and knowing — not that that’s your question in terms of it being a direct sequel — but we wanted to kind of ease back from some of the highs that we did on Saints Row 4 in terms of how extreme we went with it. It was a very conscious decision to kind of bring it back a little bit more.”

Boone also pointed to the endings of Saints Row 4 and Saints Row Gat Outta Hell as being very difficult to follow up. 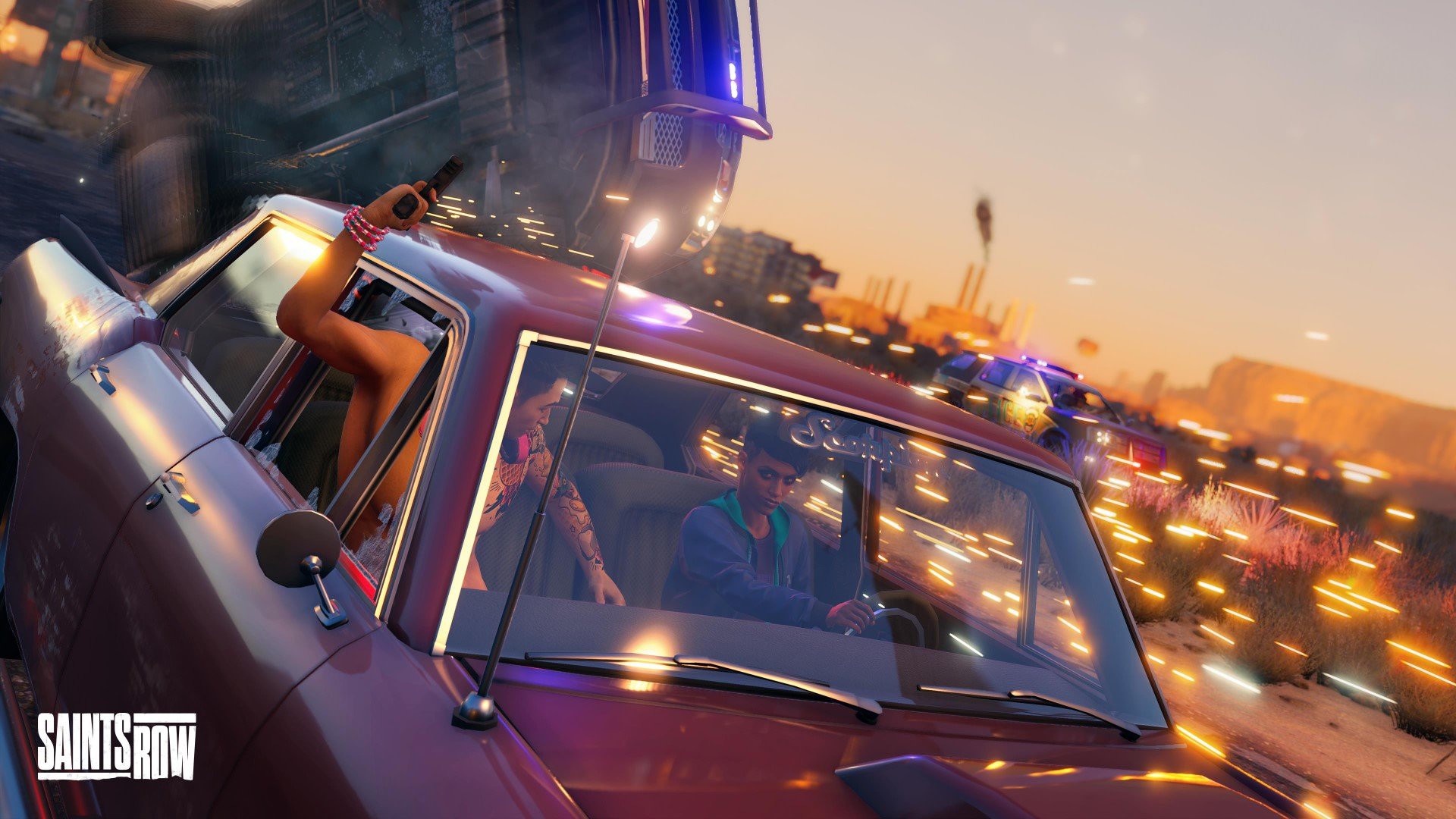 “[It was] hard to figure out where to go from there and that was probably the bigger reason why we ended up scaling back towards this reboot,” he admitted. “And then going back to some of those sensibilities that we had with the criminality.”

While The Boss is your character to conceive and role-play through, the overarching storyline and accompanying major characters are locked in by Volition. Your character will be joined by three key Saints: Eli, the nerdy type; Kevin, a Deadmaus-esque helmeted DJ and thrilseeker; and finally, Neenah, your no-nonsense driver. 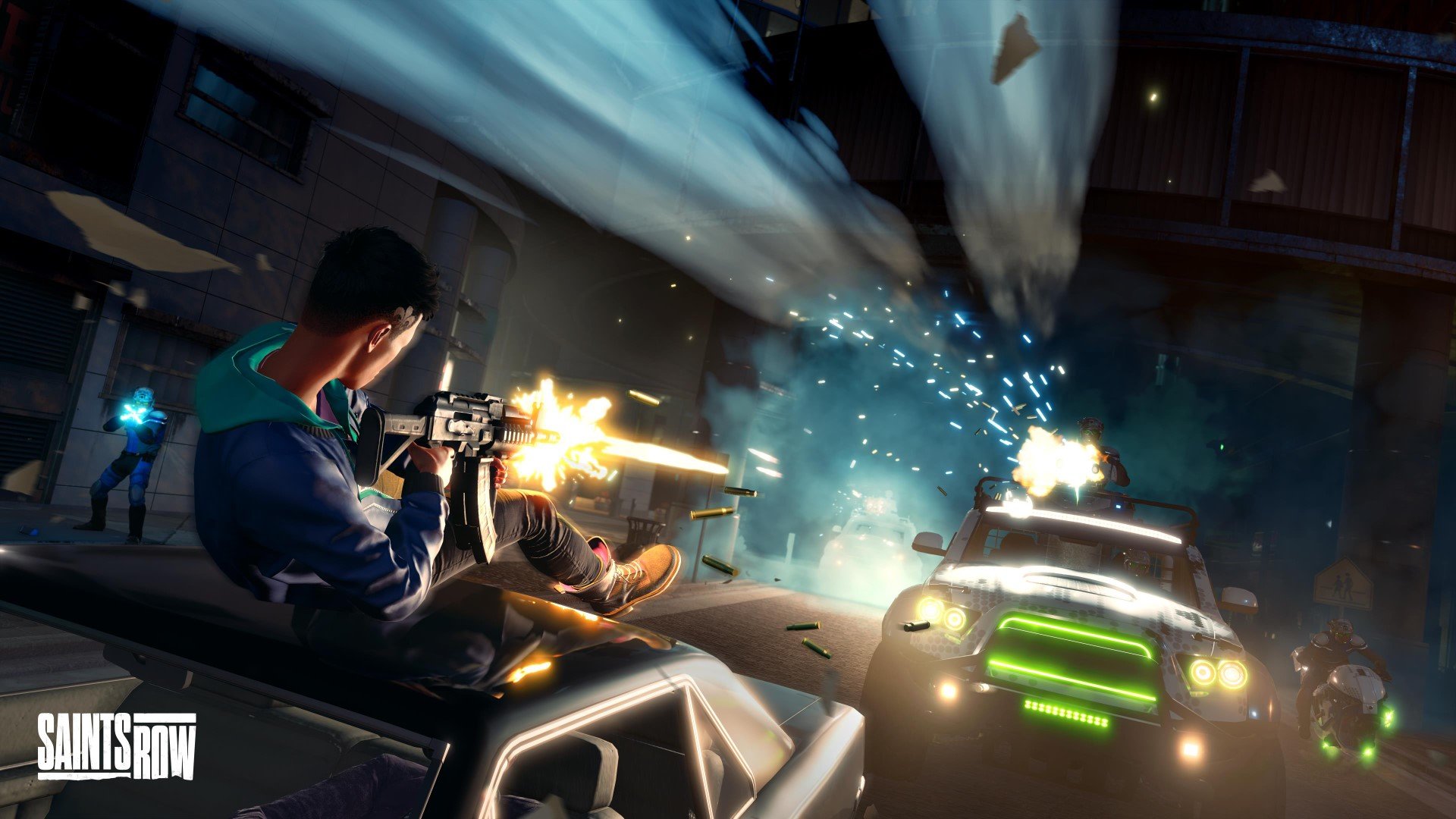 “Eli is the planner,” Volition Lead of Mission Narrative Jeremy Bernstein told Stevivor in the hands-off preview. “Eli is an MBA who came to Santo Ileso in order to make his fortune as an entrepreneur; to build a business for himself. He just didn’t quite realise the business he was going to build was a criminal empire.”

“Kevin is a DJ. He is a people pleaser. He loves people, he loves his friends,” Bernstein continued. “He will do anything for them. He’s also a bit of a thrill seeker. He grew up in foster care; he has always been looking for somewhere that he can belong. At the start of the game, he thinks he’s found it with… one of the criminal factions in town, but… he comes to realise, pretty quickly, that the real place he belongs is with his friends as they form the Saints together.”

“Neenah is the driver and grew up in her parents’ garage as a mechanic,” Bernstein said. “She has a deep-seated love of cars in her life, but she also has a deep-seated love of art; she went to school for art history and anthropology and came to Santo Ileso to get a job at a museum and wasn’t able to. So, she found herself working as a mechanic for [rival faction] Los Panteros.” 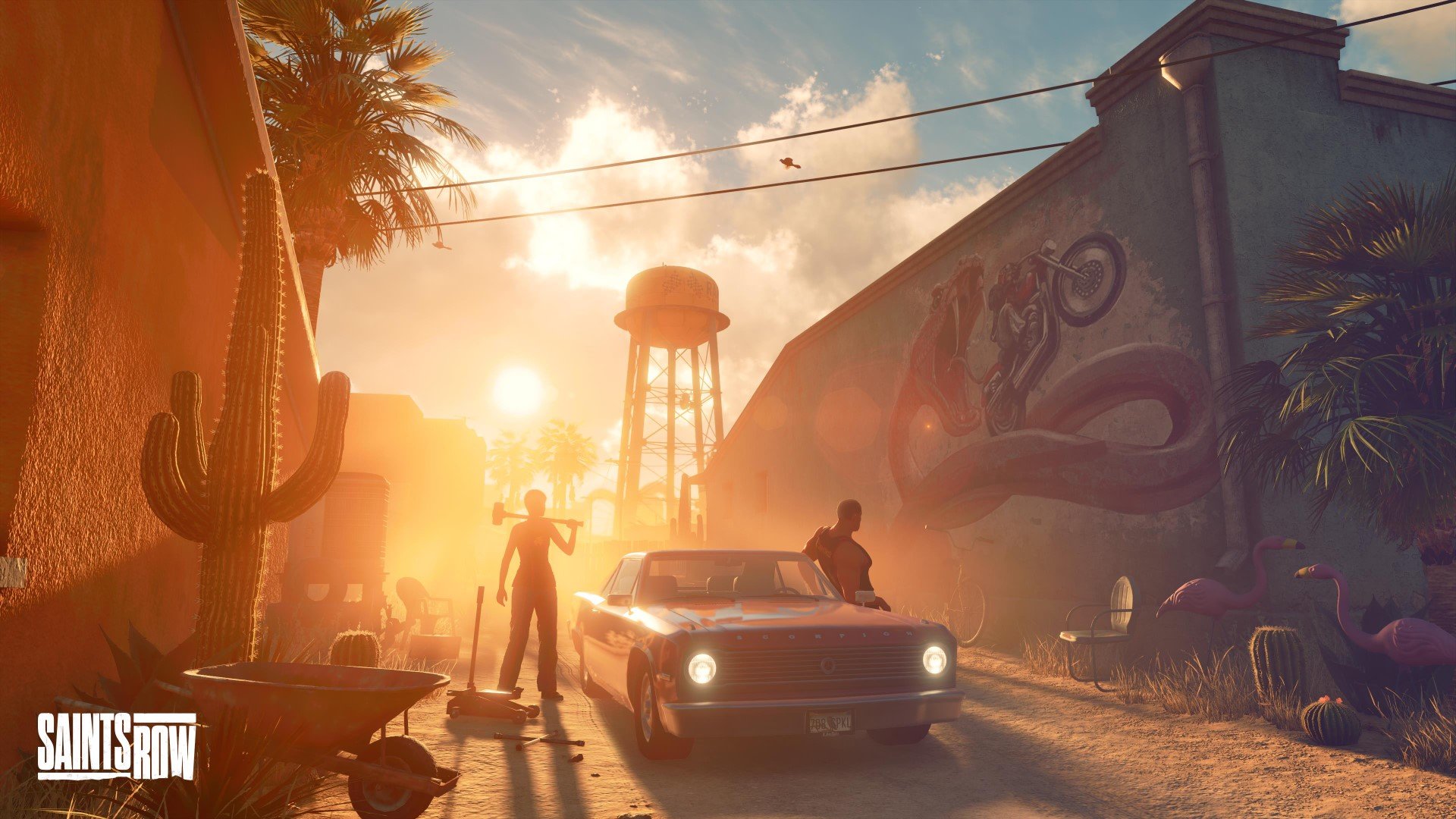 The city of Santo Ileso

“Our inspiration for Santo Ileso was the American Southwest, one of the most iconic and colorful regions in the United States,” Creative Director Brian Traficante said. “[It’s a] southern expanse that is rich in color silhouettes and just iconic imagery that we used — infused — into one of the largest cities we’ve ever built for a Volition Saints Row game. The goal had always been to be one of the most varied and diverse city locations that we’ve offered to our players.”

The fictional city of Santa Ileso is made up of nine unique districts, each with its own flavour — and some also housing the Saints’ rival factions biomes range from a weathered area (home of Los Panteros), to another lit up by glitzy neon signs. Monta Vista is a territory of opulence and wealth, while downtown is dominated by high-tech skyscrapers hoisted up by a major defense contractor (and, of course, a rival).

“Our districts are built with traversal variety too,” Traficante said. “Our financial district, for example, has tons of verticality which you’ll appreciate and jumping and windsuiting off of tall skyscrapers.” 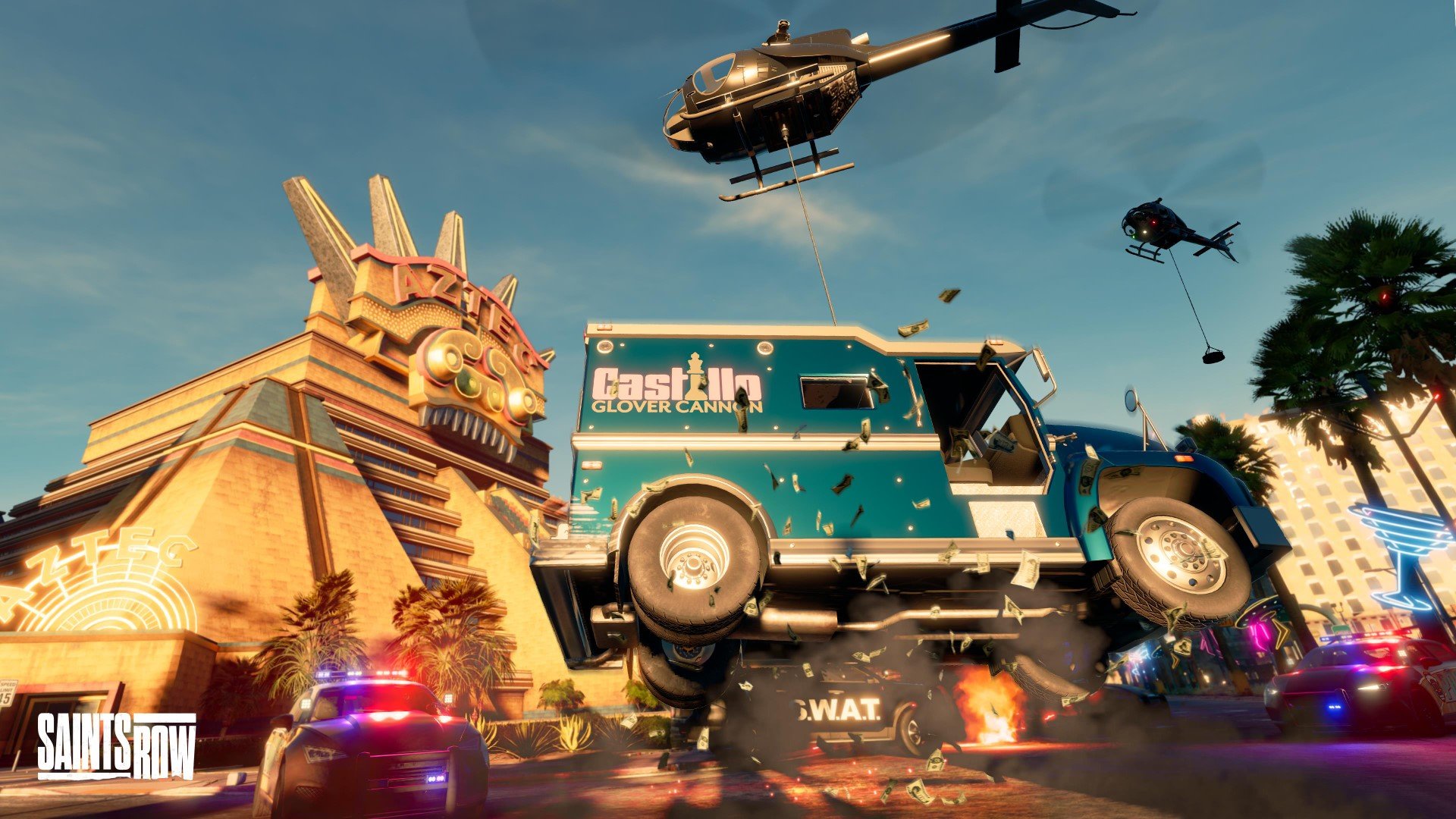 Santo Ileso is “inspired by the weird, wild American Southwest, which is a fusion of the exaggerated and the eccentric creations of the people that inhabit this world. The history of this region has permeated into so much of our world and created something you’ll never have seen before,” Traficante concluded.

“All this is surrounded by the beautiful Southwest playground, full of mystery and wonderful Saints Row things, with landmarks to gaze at, dirt tracks and bridges to jump off, and tons of opportunities for sandbox fun. Our world is built for players; it’s a core principle of ours that everything should deliver gratifying fun.”

Saints Row heads to Windows PC, Xbox One, Xbox Series S, Xbox Series X, PS4 and PS5 from 25 February 2022. We’ll have more on the title as it’s made available.