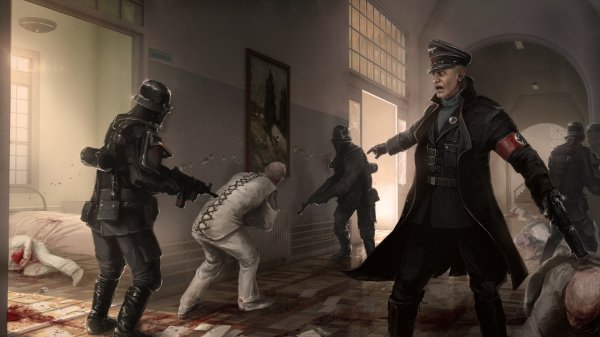 Upon looking back on the Wolfenstein series we can see it has been a major influence on the way video games have been shaped over the years. Wolfenstein 3D is widely regarded as the title that popularised the first-person shooter genre, and then a decade later Return to Castle Wolfenstein and Wolfenstein: Enemy Territory continued to make a huge impact in the online multiplayer space.

This year MachineGames are releasing Wolfenstein: The New Order, a follow-on from Raven Software’s 2009 addition to the series, Wolfenstein, which ended up being a very mediocre shooter and was likely the source of my incredibly low expectations for this new instalment. But last week was the second time I had some hands on time with Wolfenstein: The New Order and it was also the second time I found myself being quite surprised with the game after I put the controller down.

The game starts in World War II with players once again taking control of the American solider B.J. Blazkowicz. During the opening mission as you and your convoy of fighter planes are making their way to General Deathshead’s fortress, things quickly take a sharp turn for the worst. The Allied forces, armed with period piece weaponry, come under heavy attack. Strangely the enemy is equipped with highly advanced weapon technology. Their advantage becomes even more apparent after futuristic planes shoot your aircraft out of the sky, leaving  your wreckage laying on the beach  in front of a 100 foot mechanical robot. To top things off, the prelude concludes with B.J. in a coma and being put into an asylum until the 1960s. Upon awaking he quickly learns that the Nazis rule the world after the USA surrendered when an atomic bomb was used on the country. 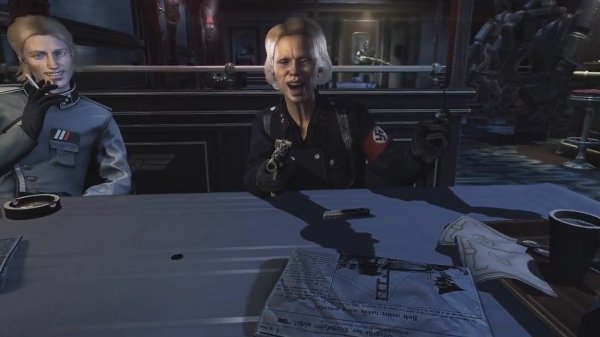 MachineGames seem to be focusing quite a bit on the story, and portray these events through a number of different methods including protagonist monologues, in-engine cinematics, character interactions and environmental items. This was fairly unexpected as I thought I’d just be running around shooting stuff for a few hours without giving a damn about the narrative which realistically, at least based on previous instalments, is likely to be the same mentality most people will bring to this game.

By mixing in a bit of old school mechanics but also borrowing from the new, Wolfenstein: The New Order is a lot of fun when it comes down to the run and gun part. B.J. is able to dual wield weapons which will remove the ability to use iron sights for accuracy, but in exchange deliver pure destruction to your enemies.  The first person cover system took a little bit to get used to as the button combination allows you to choose exactly how far you want to lean by using the thumb stick – this comes in rather handy when trying to get out of tough situations due to the way B.J. takes damage.

While a lot of AAA shooters these days don’t have a health metre and rely on hiding behind a wall for eight seconds to regenerate back to full form, Wolfenstein: The New Order digs into its origins and sticks with the health and amour counter. You’ve really got to keep an eye on exactly how much harm you can take going into the next encounter, making sure you scrounge around for amour kits and overcharge those numbers when possible.  Alternatively, certain encounters will allow you to stealth through the situation if you’re low. Some mobs may have a Commander nearby that show up as an indicator on your HUD, eliminating them first without being spotted will secure you a stealth kill; however, if detected they’ll set off an alarm and alert a number of other enemies to your presence. 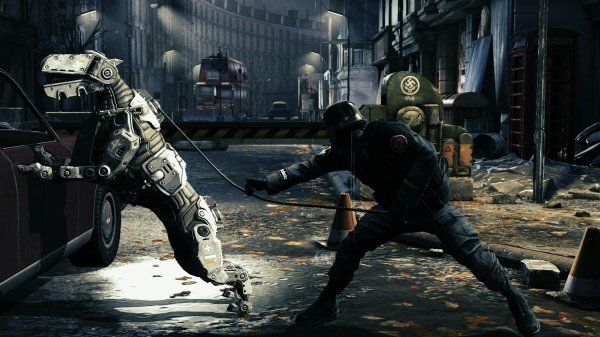 There are also a few other bits that fill out the game a bit more. Performing certain tasks — which are mostly mini achievements — will unlock perks that advance some of the things B.J. can do. Each mission also has hidden collectibles that you’ll be able to find, great for those completionists that like to scavenge. The visuals looked great on the PlayStation 4, and the violence stands right out as you shred Nazi’s and gibs fly all over the place. Lastly the music was absolutely fantastic; it always seemed to perfectly suit what was happening at any particular moment of time in the game.

While I don’t think Wolfenstein: The New Order is going to be as influential as some of its predecessors, from what I’ve played so far MachineGames has created a fun shooter that people should definitely keep an eye out for.

Wolfenstein: The New Order will be available from 22 May on Xbox 360, Xbox One, Windows PC, PS3 and PS4.