I’ve entered into a love affair with Snipperclips. I fully expect it to be a fiery, passionate one, burning white hot, yet for only the briefest of moments. Our fling will be unforgettable, but more akin to ships passing in the night — we won’t be able to sustain it for long…

…which is also a shame, because I think I’m bound to ruin every friendship I have trying to play it. After that, I’ll be alone, with no friends to call my own.

Snipperclips puts you and a pal in the shoes of two sentient cardboard cut-outs, both shaped like filled-in letter Us. You can move your U from left to right, squat and jump, but more importantly you can use shoulder buttons to spin your shape around. The titular snipping — or clipping — is all about reshaping your U into a useful tool in (what I hope is an endless amount of) puzzles. In one, as an example, one U needs to be crafted into a hook to grab and pull balloons down to the ground, and the second U needs to be a sharp point to pop the balloons. To accomplish these tasks, your U needs to overlaid upon your mate’s, and a single button press will cut that shape out from him or her. If you mess up with your snip, a second button will pop a U back to its native form. All the while, the shapes pull ridiculous faces, no matter what they’re doing.

Ben and I played through a ten minute demo, mirroring the content shown in Nintendo’s own Treehouse livestream. We initially smashed the puzzles, armed with background knowledge, but we soon realised we didn’t stick around to watch the entire stream. Faced with new puzzles, it wasn’t just a matter of cutting shapes and getting it done, but first understanding what was asked of us.

We actually attracted a crowd as we bickered, each deciding he knew better than the other. I even set down my Joy-Con at one point and asked Ben to give me his to solve a puzzle at one point; I thought I’d do better if I did it all myself. It wasn’t my finest moment, but it was entirely hilarious and joyous throughout. 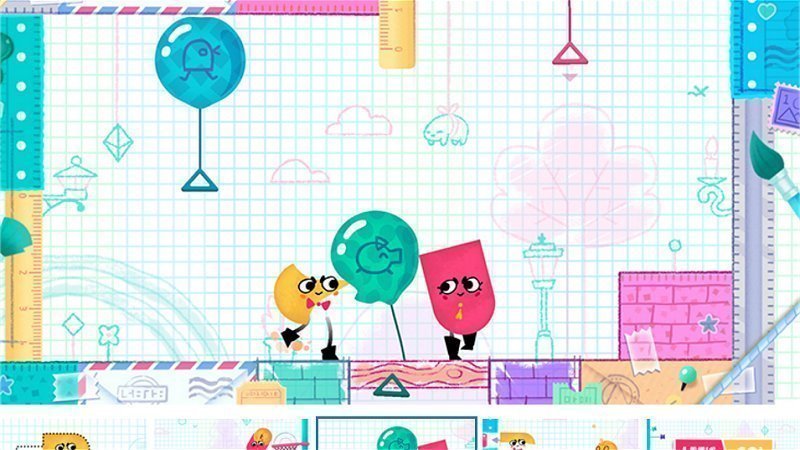 The only thing that concerns me is that Snipperclips is clearly a two-person affair. You can’t play it by yourself; most levels require co-ordination and timing that you’ll never be able to achieve alone. Couch co-op is the best way to play, but since Ben got back on a flight to Adelaide after the Switch event, I only hope we’ll be able to use online multiplayer (and our smartphones for voice chat) to be able to continue the experience. That is, if he’ll agree to play with me.

This is the type of game that we as gamers need as equally as the Switch does. Sweet, to the point — and probably very short, if its $30 AUD price tag says anything — it’s like Box Boy: plain and simple, yet brilliant. Bring it on.

Snipperclips heads to the Switch in March, the same month the console becomes available to consumers.