The Sniper Elite series has gained a following over the years because it’s not your typical run and gun shooter. The game requires a bit of patience and planing, but throws in some cool looking action moments when you do pull the trigger. Rebellion has been working on the latest iteration, Sniper Elite 4, and Stevivor had the chance to check it out ahead of its February release.

I was able to trial the first mission of Sniper Elite 4 — one which takes place in 1943 on a secluded island in Italy named San Celini. My objective, to kill General Tobias Schmidt and eliminate other high ranking officers in the area. As the mission begins, I’m introduced to a few scenarios that teach me the basics of the game: controls, stealth, combat and managing my inventory. It’s all very linear up until this point, but then the environment opens up and I’m presented with what will be my playground for around 30 minutes.

On the left, I find a crumbled tower. As I climb it, there’s was an overlook that acts as a fantastic vantage point, allowing me to easily start tagging enemies and notable points of interest. The area in front of me is very large; its terrain is diverse and elevated. While the opening few missions in Sniper Elite 3 — at least those I’ve played — are very contained and small in scale, this feels far more open and gives me the opportunity to take some long-distance shots. 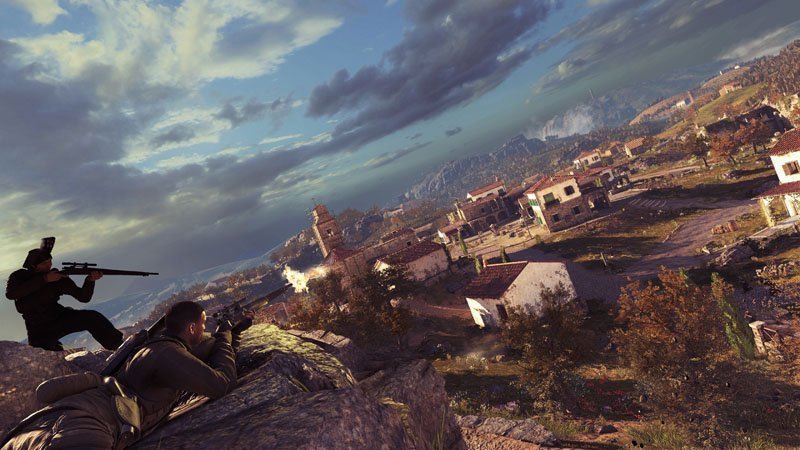 As I’m perched on top of the tower I’m given the chance to mask the sound my gunfire by using an approaching airplane to drown out any noise I make. In this brief moment, I fire the rifle at a distant enemy officer. The bullet comes screaming out from the gun and travels in slow-motion through the air. The camera pans to the target, who now looks like they’ve been through an x-ray machine. I can see through their skin; their bones and body parts are visible. It instantly reminds me of the x-ray moves you can perform in the recent Mortal Kombat titles. The bullet smashes through the front of their face and their skull explodes from the impact. It’s truly brutal. I’m playing this in co-op so my partner is experiencing the exact same bullet cam sequence over on their screen.

After seeing this, we both decide to let loose and cause as much chaos as we can. While I’m on top of this tower picking off enemies, my co-op partner is down below behind some cover making sure we don’t get flanked from the ground. Some officers start approaching from a ridge underneath and our cover has been blown. The game alerts us to this and displays that the enemy has an idea of where our last known position was, which is why they’ve come to scope things out. We both quickly begin to move and switch to some automatic weapons, as when a close range encounter breaks out they’re a bit easier to work with instead of having to resort to rifle.

After taking care of this small group we head towards our main target. We find General Tobias Schmidt patrolling around a villa and manage to silently melee him from behind, unnoticed by his nearby companions. From here we head towards our escape vehicle – a boat located on a shipping dock. As we approach the area we have a few more enemies to take care of who are scattered among a handful of military trucks. 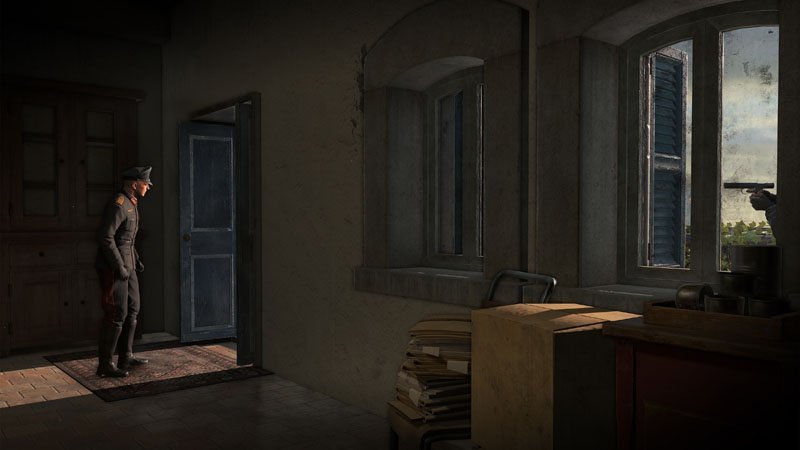 I look down my rifle sight and fire off a shot; the bullet hits the fuel tank of a truck that is instantly engulfed in flames. This sets off a chain reaction as the other trucks catch on fire and begin to blow up one after the other, taking the nearby officers with them. My co-op partner and I jump into the boat and sail off as the mission completion screen pops up. It displays the tasks we completed along with a few statistics, for example the longest shot taken (which ended up being 371 meters).

The mission that I played in Sniper Elite 4 was a lot of fun. So much so that I went and installed Sniper Elite 3 and played through a few missions with a friend later that night. I bought Sniper Elite 3 a while back but just never got around to playing it, but my time with the newest game sparked my interest in it. You can really see where improvements have been made in Sniper Elite 4 when you compare it to its predecessor. I’m sure fans of the original games will be happy with those changes, and newcomers to the series will have a great time as it’s very different to your typical military shooter. Sniper Elite 4 wasn’t really on my radar until my preview session with the game, but now that I’ve had some time with it I’m really keen to jump back in and see what else it has to offer.

Sniper Elite 4 will be available from 14 February on Windows PC, Xbox One and PS4.