Last week Nintendo Australia were kind enough to let me go hands on with everyone’s second favourite plumber. While I didn’t get a chance to play the single player portion of the game, I did have a good go at the multiplayer and I have to say, I was genuinely surprised by how good it was. 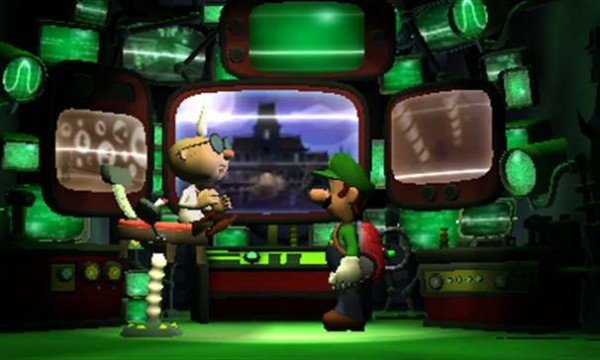 For the uninitiated, Luigi’s Mansion 2 (Dark Moon for you North Americans) is the sequel to the GameCube launch title, Luigi’s Mansion. The first game had Luigi searching a haunted mansion in search of Mario, fending off ghosts and discovering treasure with his trusty flashlight and Poltergust 3000. The first game was a purely single player affair and fans have been clamouring for a sequel for the 10 years since its release. Luigi’s Mansion 2 was announced at E3 2011, and while the news was incredibly well received, the announcement of multiplayer caused some reticence among fans. Thankfully, multiplayer is a whole lot of fun and definitely something I am keen to spend more time with when the game is released.

The controls of Luigi’s Mansion 2 will be familiar to anyone who played the original, and are simple and intuitive enough that newcomers won’t have any issue either. Luigi is controlled by the Circle Pad; while the lack of a second analogue stick is noticeable at first, you soon learn to adapt. Looking up and down is controlled by pressing X and B respectively or by tilting the 3DS. I was hesitant to try the gyro controls initially — as I generally prefer tactile control over motion — but it became natural very quickly. Within no time, I was strolling through the mansion and easily looking around by simply tilting the handheld. The X and B buttons work just fine as well, but I found it much quicker and easier to tilt. The A button activates your flashlight (while holding it down will cause a ghost stunning flash), while the Y button is for your darklight, a new item that reveals hidden objects, items and ghosts. Finally, The L and R buttons respectively control the blowing and sucking of your new and improved Poltergust 5000. 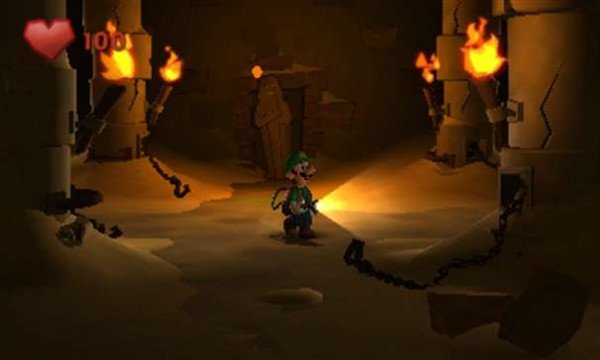 The multiplayer mode I got to go hands on with was “Hunter”. In “Hunter”, up to 4 players (via LAN, WIFI or download play) are dropped into a mansion and are tasked with finding all the ghosts before a timer runs out. Each round is one floor of the mansion with ghosts hidden in objects, behind locked doors or out of sight and require the darklight to be revealed. Once every ghost has been found and captured, four red coins are randomly distributed throughout the floor. The coins give an extra chance at winning a power-up in the end of level roulette so what was previously a slow and deliberate ghost hunt becomes a frantic chase with co-op becoming every man for himself. The power-ups apply to the next floor and include health and damage bonuses as well as bonuses for treasure.

In the initial floors, ghosts are quite easy to catch and playing with four players seems almost too easy. As you progress however, the floors become swarmed with larger groups of ghosts and hard-to-catch mini-bosses. The variety of ghosts to catch is great ranging from very simple stun and catch through to some which, to catch, are a puzzle themselves. For example, one ghost was carrying a garbage can lid. To catch him I had to wait until he attacked to dodge and stun him with my flashlight, pulled the garbage lid off him, stunned him again and then finally sucked him up. It may sound simple, but while you’re in a room full of other ghosts keeping your attention on just one becomes exponentially more difficult. 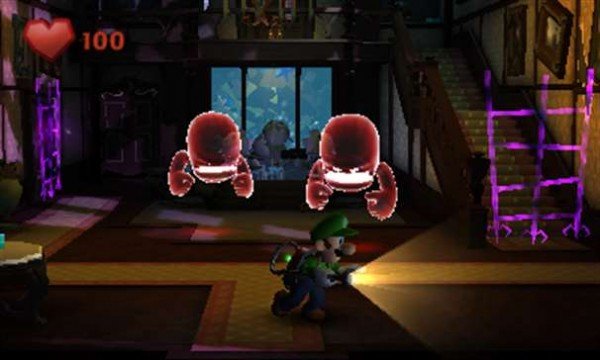 Once you do manage to stun a ghost you hit the R button to suck them into the Poltergust 5000. This initiates what can only be described as a fishing mini-game. As long as you hold down R the ghost is tethered to Luigi (unless you fail to fully catch it and it escapes) and will frantically try and escape, zig-zagging all over the screen. Like in a fishing game, you need to pull the Circle Pad in the direction opposite the ghost. As you do a bar will fill above Luigi’s head and once it’s full simply press A to capture your prey. Once caught, ghosts drop a variety of items including health, cash and treasure and keys. The keys open locked doors throughout the floor which usually harbour more ghosts. Catch all the ghosts and the round ends.

Unfortunately, I didn’t get a chance to play any of the other multiplayer modes, but if “Hunter” is anything to go by, the other modes are sure to be a blast. While initially sceptical, I was pleased to find that rather than a tacked on mode for the sake of it, the multiplayer component of Luigi’s Mansion 2 is a well thought out, cleverly designed and addictive mode that is sure to get a lot of play time once the game is released. I can’t wait.

Luigi’s Mansion 2 will be available exclusively for 3DS on 28 March.