Imagine a world where The Incredibles play and fight alongside Mike Wazowski. That’s Disney Infinity.

Imagine a game that lets you take thousands of items, characters, locations and toys from the entire Disney back-catalogue and play with them all together. That’s Disney Infinity.

Imagine a game that lets you take all of those items and characters and gives you the power to create a brand new world for them with games, races, obstacle courses and the like. That’s Disney Infinity.

It’s also so much more. 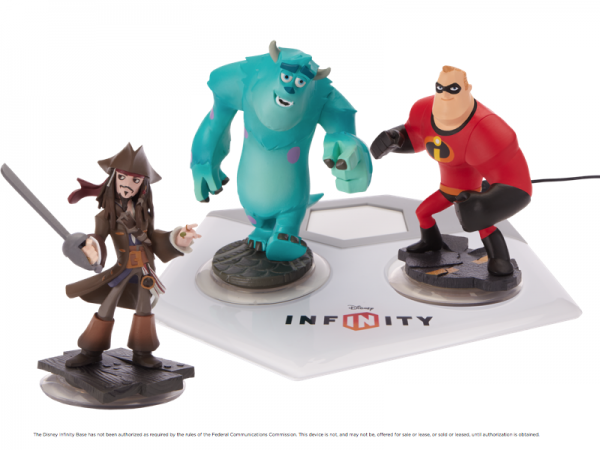 Sitting down with John Day, Associate Produce at Avalanche Studios, it’s hard not to get hyped for Disney Infinity. His genuine excitement and enthusiasm for the project are infectious. “We wanted to recreate the experience of playing with toys on the loungeroom floor. You dump out all of your toys from your basket or your box and it didn’t matter which place that they were from or which world they were from, they played together,” he says.

First up, I’m shown The Incredibles playset. I place the three-in-one playset figurine — which includes The Incredibles, Monsters University and Pirates of the Caribbean playsets — on the Infinity base and elect to start out as Mr. Incredible. Placing Mr. Incredible’s real-world counterpart on the base, he appears on-screen almost instantly. The Incredibles playset gives you a small scale Metroville to tool around in and features action-platformer fighting and gameplay. I switch between the available characters and briefly explore the world before we move onto Pirates of the Caribbean. 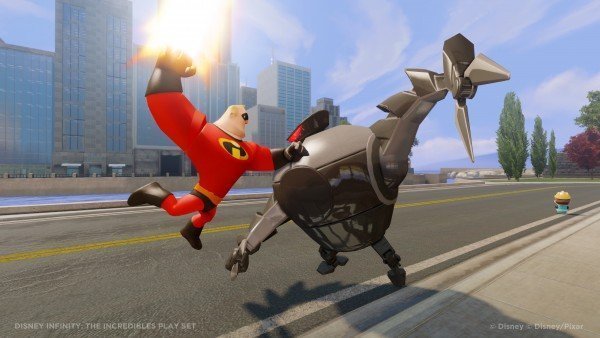 I’m now playing as Captain Jack Sparrow and find myself sailing the Flying Dutchmen on the open sea. None of the platforming or combat found in The Incredibles playset is present and it almost seems like I’m playing a totally different game.

John tells me, “We have a lot of technology that’s shared across all of the game so, we’re not developing a new game every time. We do have to develop new mechanics and we do have to build new models though.” Looking across the table I notice the Cars and Monsters University figurines. “We had to figure out how to get racing in the same place as scaring in the same place as sailing a ship on the ocean,” John explains. “It’s a lot of work but we love it.” I briefly engage in some naval battles with other pirates in the area before we move along to Monsters University. 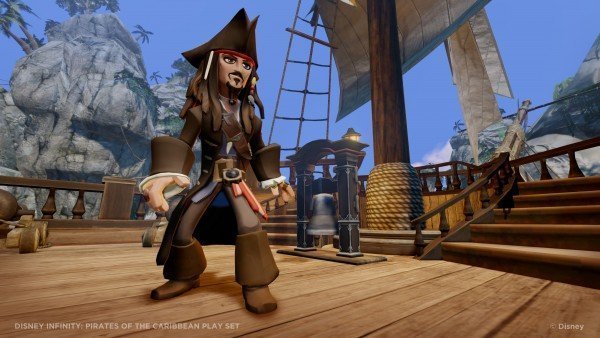 The Monsters University playset is unsurprisingly based around the upcoming movie of the same name. The gameplay revolves around “scaring.” Playing as either Mike or Sully, I make my way around the university campus, scaring off rival students, completing missions and riding around on the BMX (which is exclusive to Monster University’s playset). I mention that this playset seems like the Disney version of Animal House and John laughs and quickly agrees. “I work on the Monsters team, and the story writer could be working as a writer at Pixar,” he says. “He’s an absolute fanatic, he’s outstanding and extremely dedicated so we were able to good results.” Once again, my time with Monsters is short. John is pushing me through to what he believes is the main event in Disney Infinity: Toybox mode.

Toybox mode had its genesis in the Toy Story 3 game — also developed by Avalanche — and was really well received on release.

“It was a surprise to a lot of people, especially from a licensed game, they were like ‘We’re not used to seeing this kind of thing out of a licensed game,’ and it was the beginning of what you see here,” he says.

In the Toybox, you take any of the characters or items from all of the playsets and bring them together in one cosmic explosion of fun, delight and creativity. The Toybox is more than simply a space for your favorites to race or fight or play. You’re given almost limitless power to create and the amount of content you can create is almost… infinite. 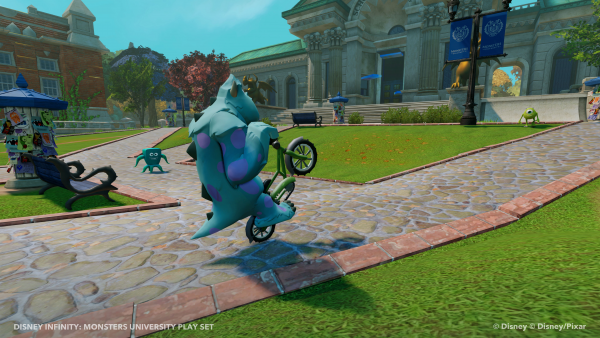 Think Minecraft meets LittleBigPlanet with a 3D platformer and kart racing gaming thrown in for good meaure and you have a small measure of what Toybox mode is. Here, all of the figurines can interact and play together — whereas each playset is restricted to only characters from the respective universe — and with the power of the wand can create “A Whole New World” from a huge array of Disney themed objects. Sleeping Beauty’s Castle, Scrooge’s money bin and Pride Rock are but a few of the elements you can include in your new world. Aside from famous landmarks, there are multiple blocks and platforms which allow you to create massive areas for your characters and friends to explore.

Better yet, the items within the Toybox are programmable. Link two items and you can make them work off each other; by taking advantage of this I’m able to create a Wipeout style obstacle course — that’s quite challenging, too —  within only a few short minutes. Given time, the community are going to come up with some amazing creations in Disney Infinity. John explains that the team are keen to see what gamers can come up with. “We are also going to support you taking what you’ve built in the Toybox and submitting it to Disney. Pending an approval process you can have it published, so that anyone else can download it. This includes cross-platform support, so I can build something on the Xbox 360 you can download on the PS3,” Day says. 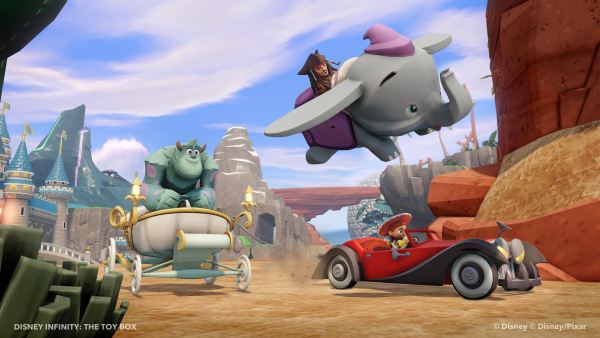 Even at this early stage, Disney Infinity rouses my inner child and I can’t help but get giddy with excitement and wonder about the possibilities that await when I get my hands on a finished copy of the game. There’s just something special about equipping Jack Sparrow with Buzz Lightyear’s jetpack and flying around a very Disney style world of your own design, or racing on a custom track while riding the elephant version of Abu from Aladdin against the bus used to ferry Doctor Teeth and the Electric Mayhem around.

When I actually started to consider the number of Disney properties that exist my mind was boggled. John explains, “In this first release of Infinity, if you were to purchase every figure and you got every playset and had every power disc and you got every toy you could get in the Toybox, it would be over 1000 toys total. Its a substantial body of work. There’s a lot to the toybox.

I can’t help but dare to dream so I ask about Marvel and Lucasfilm. John slyly replies, “Well, I’m not prepared to discuss our future product slate, but it sure seems like it would be an awfully lost opportunity not to take advantage of what those properties have to offer.”

Disney Infinity will launch on 20 August 2013 in Australia for 3DS, PC, PS3, Vita, Wii, Wii U and Xbox 360. A starter pack will cost $89.95 AUD and will include the game, the base, Captain Jack, Mr. Incredible, Sully, the three-in-one playset and two random power discs (used to change the theme in the Toybox or add buffs to characters in playsets). Additional playsets will cost $39.95 AUD, figurines will cost $17.95 AUD and a blind pack of two power discs will cost $5.95.

Disney Infinity is shaping up to deliver one of the deepest, broadest and most fun experiences of 2013. With the added collectibility of the figurines and potential for amazing Disney properties being included in the future I couldn’t be more excited. Look for our full interview with John Day to be published soon.