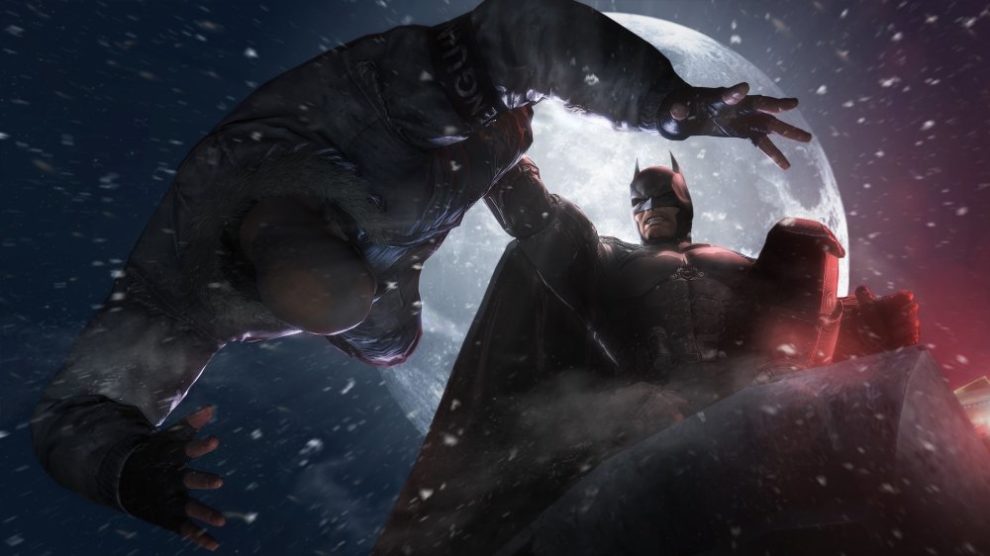 Batman is an enduring pop-culture icon. Timeless and genre-spanning, there’s something about the Dark Knight that resonates with gamers, comic readers and movie goers alike. That’s why there are so many Batman stories, told at many points during his career and life.

Every Batman we’ve seen in video games has been an established Batman. He’s earned the grudging respect of the GCPD and in return they work together.

Not so in Batman: Arkham Origins.

In a hands-off demo I was given at WB’s recent event in Sydney, I was shown just how much Batman and the Gotham Police truly do not get along.

In this newly revealed sequence, Batman has discovered bodies at a crime scene and is unable to identify them. Creative Director Eric Holmes explained, “He needs to identify them because he’s chasing the Black Mask. Batman has great detective skills, he has amazing technology through his cowl and Batcomputer to reconstruct crime scenes, but what he doesn’t have is a database and… access to fingerprints and DNA. He needs to get access to the DNA database to identify these bodies and to get access to that database, he’s going to have to break into the GCPD.”

With the scene set, Holmes guided Batman into Gotham City. Where Arkham Asylum was very self contained and Arkham City opened the game world up, Arkham Origins is far and away the biggest game world we’ve yet seen. Arkham City often felt artificially constrained, by nature of the prison setting, but in Arkham Origins it feels like you have all of Gotham as your playground. Throw in the Batwing as a means of fast travel and the game suddenly feels huge. As it should.

Calling up the Batwing, Holmes fast-traveled to the Batcave. “The Batcave here is something new to the Arkham franchise. This is THE Batcave, and it’s currently under construction,” Holmes proudly explained. On arrival, Batman is greeted by Alfred who advises him that a new gadget – the Concussive Detonator – is available on his work bench. Using the gadget instead of just Batman’s fists will do less lasting damage to the fuzz. Holmes explained that Arkham Origins is set during Batman’s second year and the GCPD is still a very corrupt organisation.  Batman has no respect for the Police and in return they see him as a dangerous vigilante. Alfred and Batman disagree on how best to deal with the Police, something which Holmes told me will be a running thread throughout the plot. After collecting the Concussive Detonator, Holmes once again used the Batwing to fast travel to a location near the GCPD building.

Something instantly noticeable about Arkham Origins’ Gotham City is that it’s covered in snow. Arkham Origins is set during winter and the white powder covering nearly every surface sets the gameworld apart from its predecessors. Night time in Gotham is oppressive enough, but with the added sense of cold and isolation, Batman truly seems like one man against the odds.

To gain access to the GCPD, Holmes directed Batman to the rooftop of the building. Before he can enter though, he needs to take out the members of SWAT on patrol. He explained that entering the GCPD building – while necessary – is very dangerous for Batman. “The GCPD SWAT team are actively trying to get in on the kill, they’re trying to kill Batman… so that they can claim the prize money,” he explained. At this point for anyone familiar with the series, a typical ‘room clearout’ scenario takes place. Holmes expertly dispatched each patrolman using his grapnel, stealth and silent takedowns. Once the coast was clear he was free to enter the station.

Once inside, Holmes explained that they’ve tried to shy away from the typical gameplay of entering a room and having to defeat each enemy before moving on. The developers want to give more choice to the players and allow them to choose stealth over combat, he says. It makes sense too. The GCPD is full of Police officers itching to catch/and or kill the Batman, so remaining undetected is the safest option. From here, Holmes guided the Dark Knight through vents and corridors, always being cautious to avoid any contact.

The station itself is rendered gorgeously and thematically fits right in with the Asylum, Courthouse, Museum and other locations from the previous games. At one point, Batman reached a room full of SWAT goons, discussing their plans to murder him and claim the reward from Black Mask. Switching to Detective Mode, it was revealed that taking them on would be an impossibility as each member was armed and armoured. Opting to silently pass overhead, Batman came across some corrupt officers beating on a couple of homeless rounded up for sport. As a defender of the innocent, Batman stepped in to deal with the situation. Combat looks and feels exactly as it did in previous games, which is great, because the Arkham series combat is perfect. Holmes activated the Concussive Detonator and knocked several officers down in one fell swoop. Only one remained standing and a swift punch made short work of him. The homeless thank Batman and make mention of Anarky. Holmes mentioned that Anarky will play a significant role in the game, but can’t elaborate at this stage unfortunately.

At the very end of the demo Batman spied on an argument between none other than Barbara Gordon – not yet Batgirl – and her father, Captain James Gordon. “He’s out there catching the criminals that you let walk free!” she yelled. Gordon, who at this stage is heading up the anti-vigilante task force – has no time for Batman. “He’s the worst kind of criminal. The kind who thinks their actions are justified,” he snarled.

At this point, the demo concluded as Batman skulked through the vents of the GCPD. It’s clear that WB Montreal is aiming for a very different tone with Batman: Arkham Origins and from what I’ve seen, they’re succeeding. Batman is totally alone and being hunted. He’s cocky and angry. He’s not the calm and reasoned character we’ve see in the two past games. Villains are out to get him as are the police and SWAT. Not even Gordon is on his side at this point. It’s a bold narrative choice to make, setting it so early in Batman’s career, but it’s a gamble that looks as though it will pay off. Fans will get to see a different, more vulnerable side to their favourite hero which will only endear him to them further. I was initially concerned about the series growing stagnant, but Batman: Arkham Origins looks to be every bit the Batman story and brilliant game its predecessors were and more. Colour me excited.

Batman: Arkham Origins will be available for PC, PS3, Wii U and Xbox 360 on 25 October.