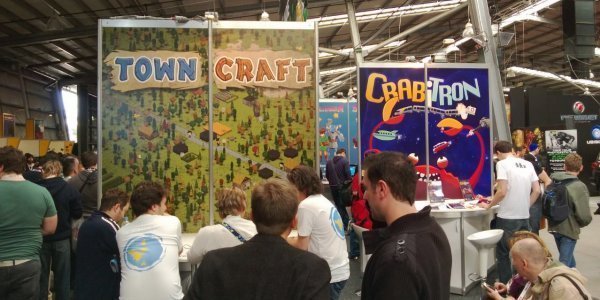 If you managed to make your way to PAX AUS, then you are well aware there was a strong indie representation – as is the modus operandi of PAX. While many of us here at Stevivor managed to get some time with certain titles that caught our attention (additional previews forthcoming!), I thought it easier to write a brief overview of everything I personally managed to get my hands on – minus some of the titles that we doubled up on.

The booth set up by developer League of Geeks caught my attention mainly based on its style and colour — it was quite easy to determine the setting of the game from the typeface of the logo and the style of the artwork, and fantasy is a theme I tend to enjoy. Initially, I was thinking this might be an RPG or something similar, but what it turned out to be was probably somewhat more intriguing.

Described to me as a reinvention of the tabletop board game for iOS devices, Armello displays a procedurally generated map, and places four players at opposing locations. The game is turn-based, and even includes the look and feel of a dice roll – performed with a flick of the fingers – in an attempt to bring the tabletop feel to the digital realm. More than this, though, Armello melds trading card features with its tabletop ruleset, making the title a kind of cross between Catan and Magic: The Gathering (although it is wildly different from both of those titles). 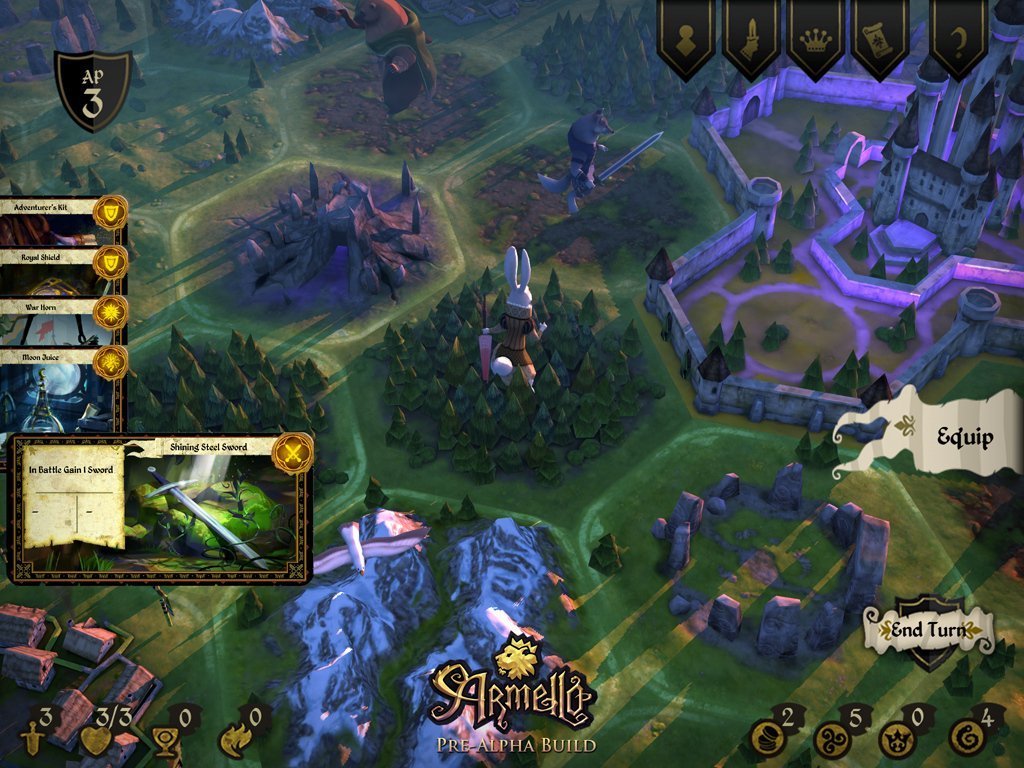 Essentially, you play as one of four classes — a wolf, rabbit, bear, or rat — each with different traits and skill-sets. You make your way across a board of hexagonal tiles, claiming villages along the way, with the aim of claiming the central castle, wherein the king has gone crazy. Of course, it is PvP, with the king also throwing challenges your way. Cards are brought in to battle, and provide attacks and buffs, with certain single-use cards able to be used between battles (throwing knives, for example).

It’s still a long way from release, but it looks gorgeous, and played really well. The developers spent 8 months just developing the idea as a concept, before embarking on building the code and assets themselves. Essentially a labour of love, it will be released “when it’s ready.” Expect a multiplayer digital board game (both local and online), with a single player mode as well.

Interestingly enough, Beatbuddy did NOT grab my attention – at least not initially. The developer — Threaks, out of Hamburg, Germany – managed to hitch their wagon on to the Intel booth, and so it was something I overlooked. As a result, I found myself being pulled out of the crowd (as I was wearing a media pass), and asked to see their little game.

And I am really glad I was.

Beatbuddy, as the name suggests, is a music-themed title, but plays out in the form of an action arcade title… but underwater. You play as the titular Beatbuddy, a little blue creature floating about wearing headphones (which does seem a little dangerous). The aim is to make your way through the level, swimming and boosting through the watery water-like substance (likely water), solving simple puzzles along the way, and avoiding spiky enemies. Many of the puzzles take the form of rhythm puzzles; the need to pay attention to the beat becomes very clear as the game progresses.

This is where the real charm lies — beats pulsate throughout the levels, but the players movements actually dictate the levels of certain components. Stand still for a moment and the backing bass will subside, advance through the level and the overall complexity will increase. Various items and enemies will have their own beat, and manipulating these will allow movement throughout the level. It was really quite well done.

The game looks charming, and is well animated — this build was apparently only a month or so old. It’s still a week or so from release (on Steam and consoles), but for a first release from a new developer, it’s rather promising. We’re hoping to be sent a review code on release, so look for a Stevivor review in the coming weeks.

Black Annex is a forthcoming indie title built on QBASIC — something the developer actually shied away from mentioning. In some ways, he doesn’t want the conversation to be around the technology, as it was simply a means to an end. However, after playing it, I’d say it is a huge achievement; overall, a good game is a good game regardless of the tech behind it.

But that’s the question — is this a good game? I’m not yet convinced, but I’m leaning towards yes. It’s certainly not a BAD game, but my experience was soured by a lack of explanation within the (very short) tutorial, partly due to my doing something that caused the code to crash. By way of explanation, Black Annex can be compared to Syndicate — it puts you in the business of corporate espionage, and allows you to build a team to take out on missions, from an isometric perspective. The demo I played didn’t explain that I started in friendly territory; I thought I was infiltrating the enemy, and I made a fool of myself trying to distract my fellow employees. Eventually, though, I muddled my way to the right location, found my next “project” and started a real infiltration and assassination level.

At this point, the devs noticed I was floundering somewhat, and gave me some pointers, which opened the game up greatly.

Controls are simple: one mouse button moves your character, and the other is for distraction or action. There are different items that an be interacted with, as well as different individuals, but the complexity of the roles within the game are not clear at first. For example, a server can only be hacked by a deceiver persona; these individuals can also capture individuals. But only an enforcer can fight back. More than this, players need to interact with NPCs in very specific ways – they must be in front of their workstation for example. In some ways, this seems like a limitation — in my opinion, though, it makes the game more of a puzzle strategy than a strategy on it’s own; it kind of felt like a sci-fi version of chess, albeit a little more fast-paced.

How it all turns out remains to be seen, but there is a clear potential for this title, and its developer. We will be keeping an eye on its progress.

TownCraft was released just as PAX opened, and is the first game for developers Flat Earth Games. Feeling similar to a bunch of titles — not the least Minecraft and Terraria — TownCraft still manages to maintain its own look and feel. As the developer themselves described it, TownCraft is a title to be enjoyed, something relaxing. Thus, there are no monsters that attack you – not during the day, and not during the night cycle.

Players start out as a character in an open, procedurally generated environment. They can then take twigs from trees and stones from piles and use them to create tools, which can then be used to chop down trees or break apart stone. Not long after, tool benches, houses, and various items can be crafted, allowing players to build their own town, which will see its own visitors and citizens appearing over time.  It has its own art style – the goal of course is for recognisability – and the menus are simple and fairly intuitive. There’s a menu for crafting, another for inventory, and another for building – that’s all I saw in my time, but each was clear and clean.

At present, the title has only been released for iPad, but the developers are looking to bring it to iPhone in the coming weeks to months. At the same time, there is a goal to allow for cloud saves, but there are several issues that need to be overcome in terms of coding and the like. Still, the goal is to bring all updates to players free of charge.

Yes, this is a premium iPad title, released at$5.50, but the developers promise the full game is available from the get go. There is zero pay to win or paid downloadable content of any kind. The model is one of premium content, with the developers looking to demonstrate that a full game experience can be had on iPad, and shouldn’t be undervalued.

In my time with the title, it is clear that the 2.5 years of development was well spent, and TownCraft is worthy of the asking price, at least at first glance. The game was fun, but deep, with clear expansion capability in future, simply in terms of the wide variety of items that are available for collection.

As mentioned, the game is now available for iPad on the App Store, so if it sounds like your thing, you should check it out.

Zombitsu was playable on Ouya at PAX AUS, but is an Android and iOS game aiming for release early August. Essentially a 3D runner (there are levels in the game, but I’m not sure if they are unlocked, or if the game is, in fact, an endless runner a la Temple Run), the developers have added attacks and special moves that can be acquired over time.

You play as a ninja named Hiro (naturally) who finds himself running through a Japanese-themed environment full of zombified enemies. The Ouya had two buttons: one for jump, and another for attack, and various combinations and double taps of these buttons would allow for a number of varying special moves, including thrusts, downward strikes, and the like.

It’s a fairly simple game overall, with what looks like cel-shaded animation, but there’s a lot of fun to be had. Multiple paths present themselves through a given level, across both the x and y axes, and this allows for (albeit somewhat limited) player choice.

Exactly how it all blends together to provide an experience that drives players to want to advance through the game remains to be seen – as does its price point – but this is one forthcoming mobile title that’s worth keeping an eye on. Look for developers Ruma Studios on Google Play and Apple’s App Store soon.