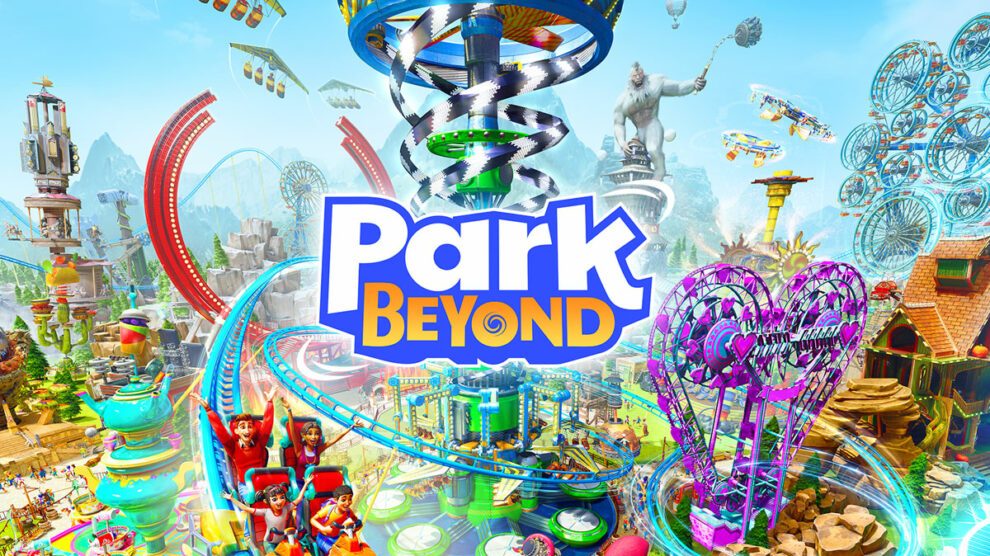 Park Beyond will offer up a Gamescom 2022 demo, and Stevivor was able to check it out in a hands-on capacity ahead of this time.

While the demo itself focuses on a 15-minute experience that will also serve as the title’s first mission, we were also able to go beyond that (pun intended). We began building a simple rollercoaster and progressed into flat rides and what developer Limbic calls the core of the park builder itself: impossification.

“We were really exploring different directions of where the game should go, and what stuck with us in this phase was the idea of making something even more exaggerated and more crazy than you could actually experience in real life,” said Creative Director Johannes Reithmann.

“We wanted to do something that you could not experience going to normal theme park; you would be riding coasters which are more thrilling, you will be experiencing attractions which are more outstanding than in real life. This is something which stuck with us and we wanted to build a whole game around it. This is where impossification comes from — the idea there is that you are starting with a park which you could also be going to in real life, but then you would be overexaggerating the park… and bringing it to the next level.”

In terms of in-game applications, impossification can mean anything from placing a giant octopus at the top of one of your water-based rides, or adding in actual cannons to a rollercoaster (the latter, something you can do in the Gamescom demo). It doesn’t stop there, though — impossification extends to your fish and chip stalls and even to your park janitors. 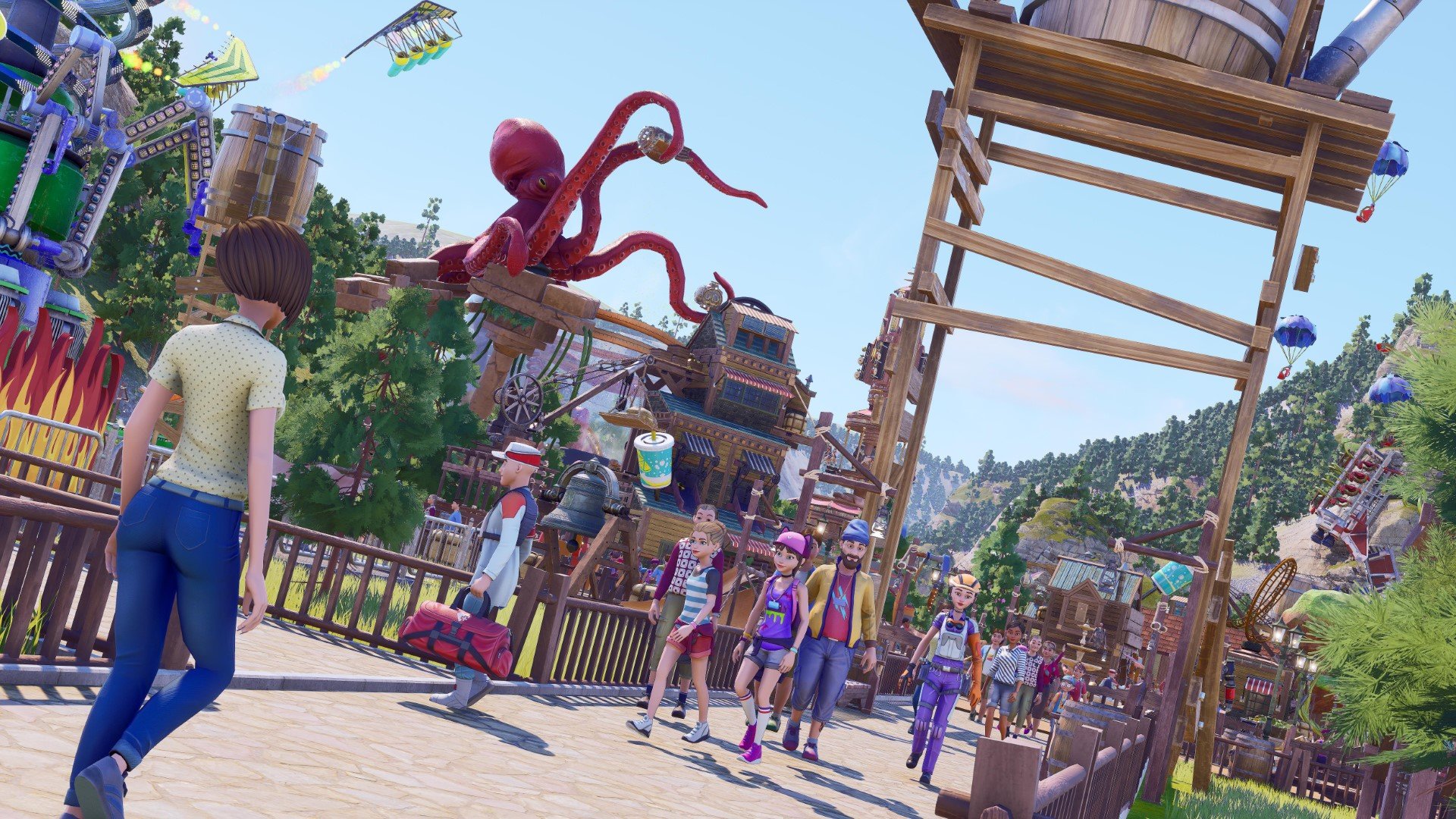 “It spiralled out of control; we started to use impossification everywhere,” Reithmann continued. “You can impossify shops — imagine an impossified kebab place in the park — or you can also impossify the staff members running around. There is an overexaggerated janitor roaming the streets and cleaning out the trash bins. How is an impossified mechanic getting from one place to another? Maybe on a hoverboard or something?

“This is the spirit we wanted to keep for the whole game. This is basically the concept for impossification in Park Beyond.”

Park Beyond isn’t just relying upon the impossification gimmick; it will also offer up three different layers of complexity when it comes to actual park management.

“So on the bottom we have what we call layouting gameplay. The player, of course, builds their park and places roads and flat rides and shops and so on,” Reithmann explained. It matters a lot how the park is laid out —  which flat rides are close to which shops, how long the distances are, and so on. 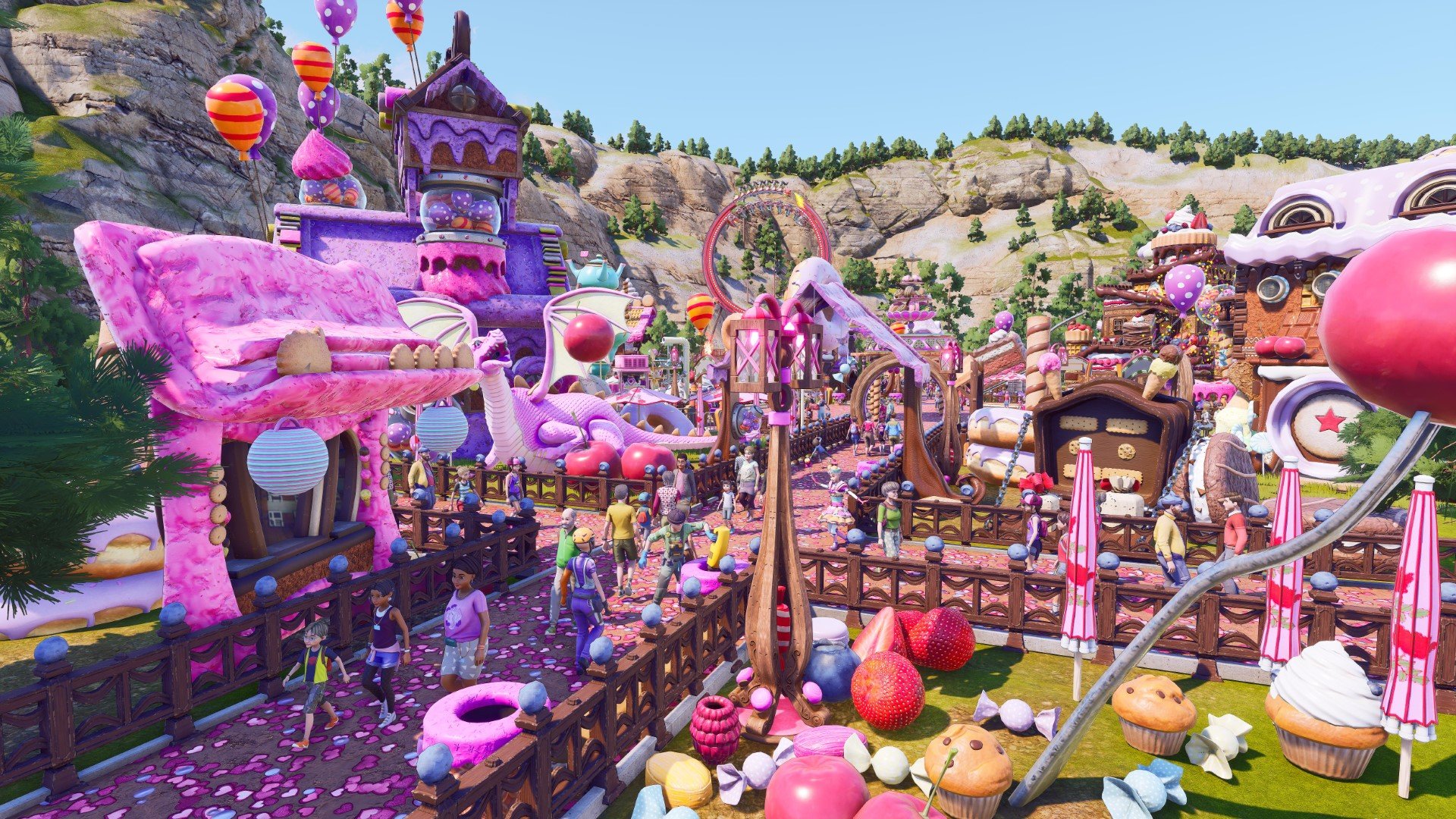 “On the second level, we have what we called management features; this is mainly about hiring staff members — the right amount, the right types of staff members for your park,” Reithmann continued. “It’s also about tweaking individual prices and fees for the rides and all the different items we sell in the different shops.

“The third layer is about the deep management complexity for everyone who wants to engage a lot and also optimise the park to its fullest,” he said. “They can have fun with all the statistics we have in the game. They can check out the different heatmaps we have — overlays over the park, which gives you information. So for example, to find out which part of the park is the dirtiest.”

Reithmann stressed that players don’t necessarily need to go down into that third level, but it is there for the numbers-focused. A single-player campaign will also help ease players into these different layers, with NPCs introducing you to the needs of the finance department and so on. 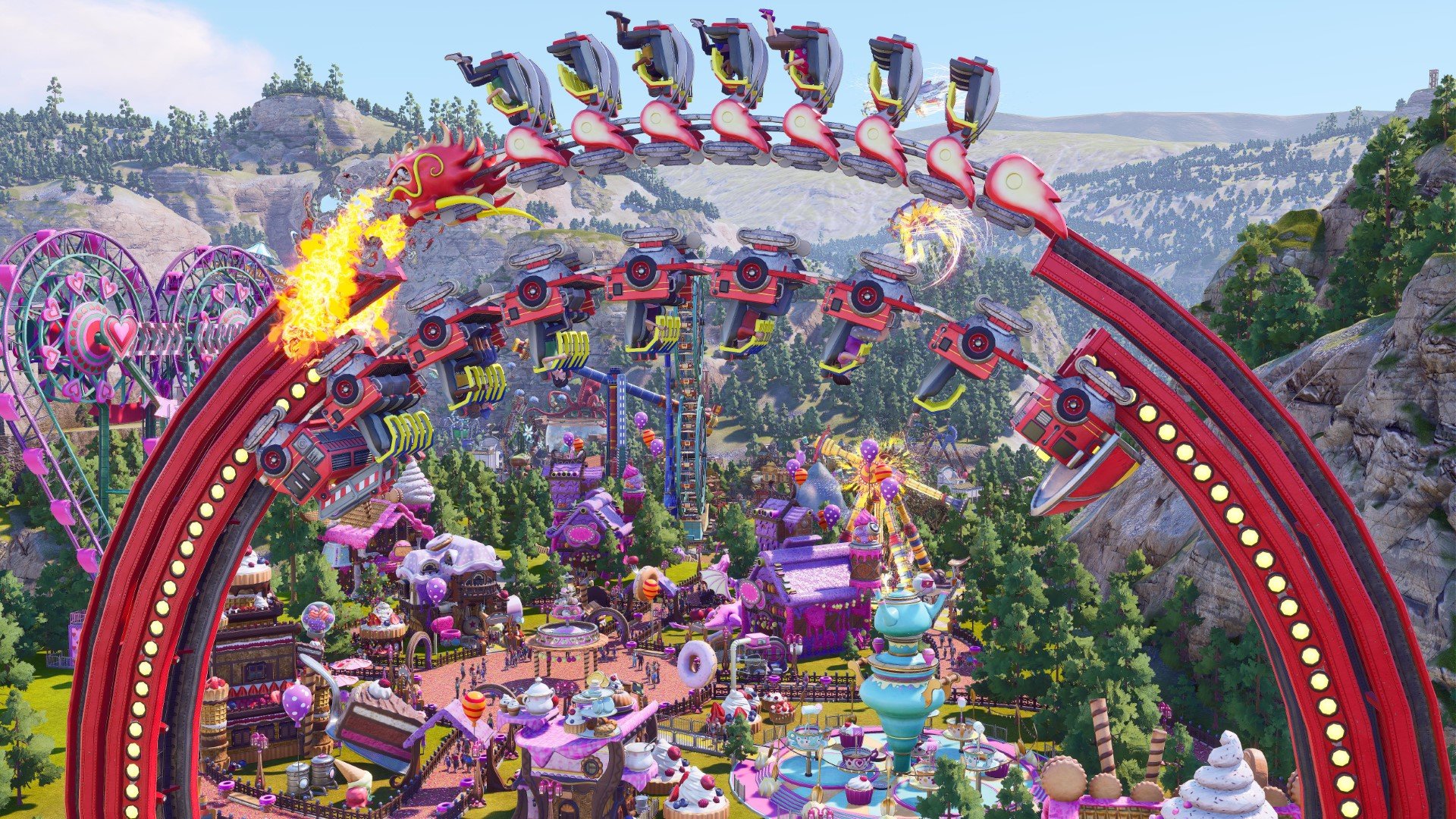 To get around that hurdle, the single-player campaign will have you as the visionary demonstrating just how amazing you are to win board members over to your side.

“Every time a new character comes to the board, the corresponding feature is introduced; for example, Izzy is in charge of finances. When Izzy joins the board, you learn about finances,” Reithmann explained. “She will also challenge you that the park is not only crazy and innovative but also financially sustainable.”

Finally, if you’re like me and can’t build or design anything to save your life, you can rely upon the smarts of others with a system what will let you share and use pre-fabricated park elements. 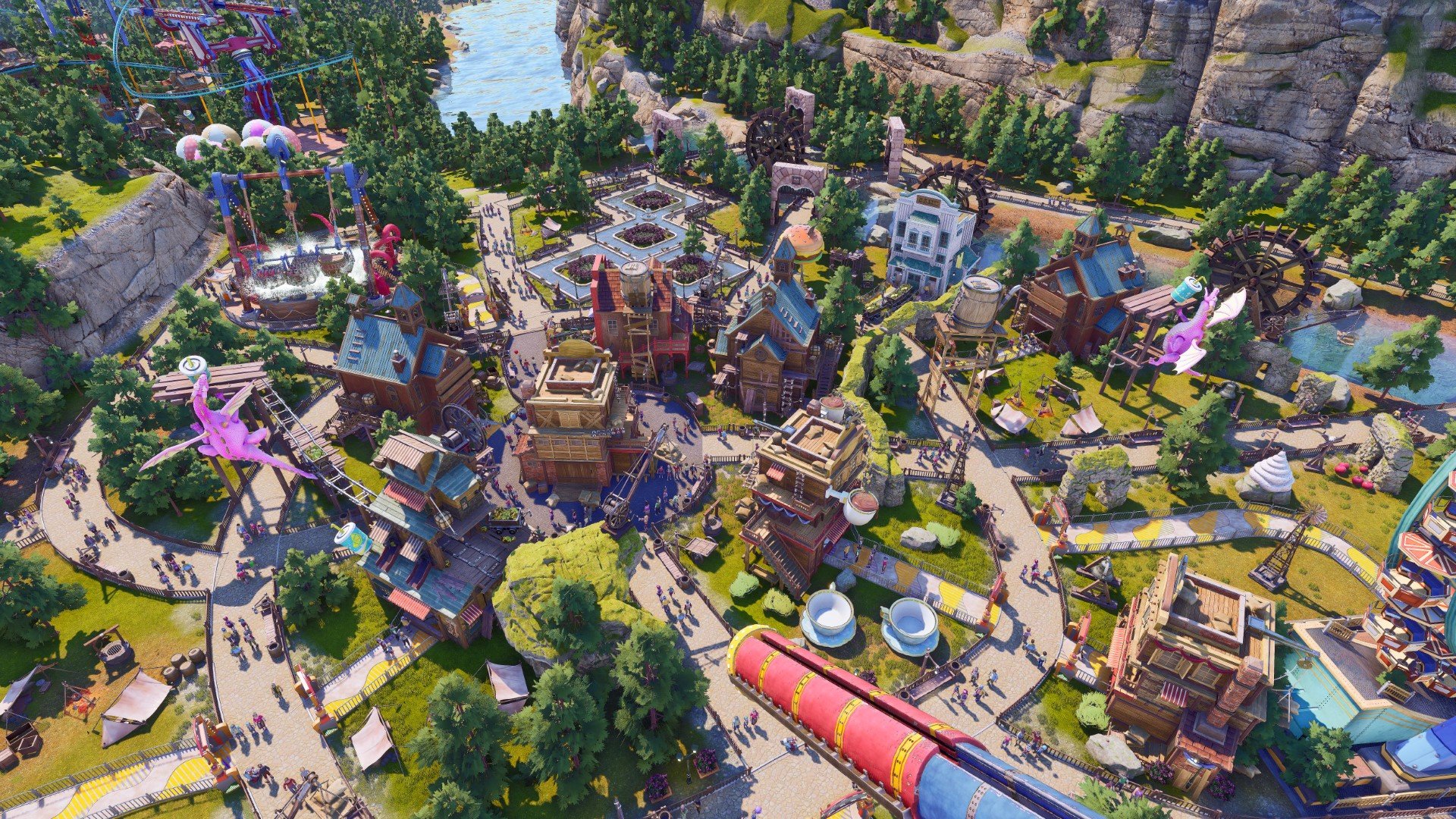 “What we are also offering in Park Beyond is the way for you to share your whole park or your whole creation, but also individual pieces from the smallest creation you can imagine… to whole words you created,” Reithmann said. “This is really as simple as possible — you are creating your building, your tower, your castle, your bridge, your coaster; you are proud. Then you can save it as a blueprint and make it available for either your friends or… everyone in the world.

Limbic, of course, will also be offering up creations of their own for players to use in-game.

Once you’ve built a ride, you can of course jump into a first-person view and experience it for yourself. You can check out the coaster we made inside the Gamescom 2022 demo below.