True to 343 Industries’ word, Halo 5: Guardians’ Warzone mode really is player versus everything.

At E3 this year, Stevivor had a chance to go hands-on with the game.

The premise of Warzone can be boiled down to one simple objective: kill everything. Mastering the mode will require a lot more. In the new mode, teams of Red and Blue are deposited on a map. Each team will have a base at one side of the map, and before progressing any further, each team will need to secure their base, killing the computer-controlled NPCs that are holding position.

Once its base is clear, the team is able to head out into the map. On each map, there will be three hardpoints that can be secured and controlled. Controlling a point means it’ll earn you points; the first team to 1,000 points wins. 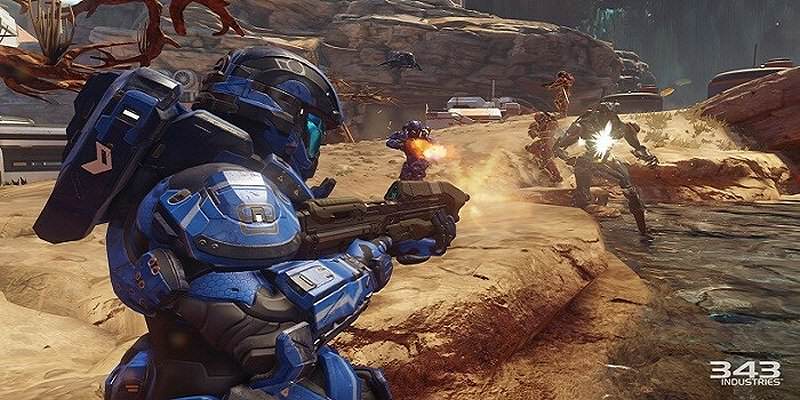 There was a lot going on in the game I played, but it was manageable. Spawning on the map, my team made quick work of the NPCs that were in our base, and set off to secure hardpoints A and C. Random NPCs littered the map, and were easy enough to take on, but sooner rather than later, we began to encounter the other human-controlled Spartan team.

It was there that you really had to figure out what you were doing. Do you stand at a hardpoint and defend after you’ve controlled it? Do you team up and set off in search of the enemy team, or do you head in the direction of a boss and try to secure some easy points? There really isn’t a correct answer.

If you played the Halo 5: Guardians beta, you’ll be familiar with the tweaks to Halo multiplayer gameplay. Things move at an increased-pace, and you’ve got abilities like a ground pound and sprint at your disposal. It’s Halo, but not, and I’m not sure if I like it. Halo used to have a feel all of its own, but playing Warzone brought with it shadows of Call of Duty or similar gameplay. I’m sure it’s something that will split new and old fans alike.

As our teams progressed through the map and earned kills, currencies called Energy and REQ Points came to the forefront. REQ Points – recently revealed as purchasable, microtransaction-laced items – are used to purchase and secure better weapons and vehicles, and are used at requisition terminals placed in your base and in the hardpoints. To be able to spend those REQ points – and this is how 343 says it’s kept things balanced – you’ll also need to earn Energy Points.

The system seemed a little flawed.

My team was holding its own for the start of the match, but players weren’t communicating and basically scattered to the four winds while the other team moved as a proper unit. My teammates and I were being mowed down left and right, and soon enough, the score was looking bleak. At around 700-300 points, I began to see how outclassed we were; adding insult to injury, it’s at that point the other team was being showed in better stuff.

Rocket Launchers. Warthogs. Mantis after Mantis, as far as the eye could see. 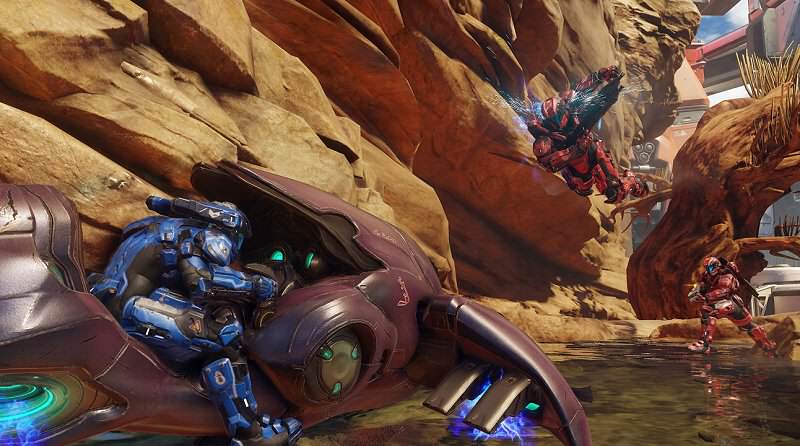 I understand that multiplayer modes of this sort – and hell, even in MOBAs – tend to reward a winning team with neato stuff, but this only served to crush my poor team that much quicker. A small glimmer of hope formed though, when somehow, my team managed secure all three hardpoints at once. When that happens, the offensive team has the chance to locate and destroy the core of the other team’s base, and if that’s achieved, it’s an instant win for the successful one.

Down around 650 points but with the other team’s core exposed, a newfound sense of being washed over my team. We found the core as a group and almost had destroyed it… but since we were all there and had left the hardpoints exposed, our opponents captured two points, removed the core from our reach, and very shortly afterward had secured their 1,000 well-earned points.

Overall, Warzone is great fun, but seems like it has some balancing issues. Hopefully these are further identified and addressed before release.

Halo 5: Guardians will be available at retail from 27 October on Xbox One.