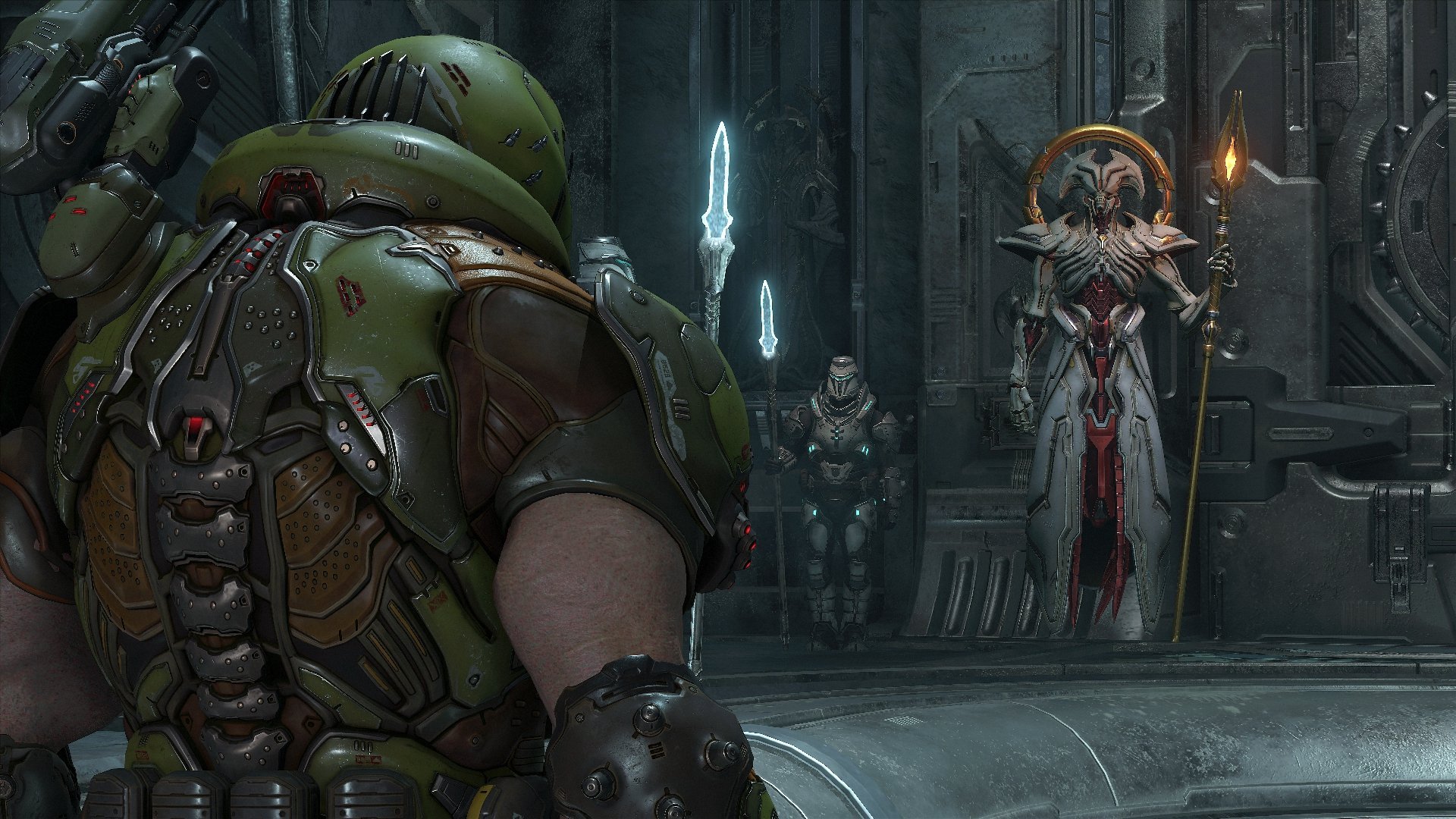 I went in cocky for my 3 hour hands-on with Doom Eternal. I figured I could, because hey — I was the first console gamer in the world (according to YouTube) to beat the save file-deleting Ultra-Nightmare difficulty in Doom (2016). Hell, I even repeated that feat on the VR spin-off entitled Doom VFR, a stomach-churning ordeal that I will also never fully tell you about.

Surely… stupidly, I thought, the ol’ hand-eye would simply transpose across to this new sequel. What went down, however, could more aptly be described as hand-arse.

I can tell you with authority that Doom Eternal is a familiar yet radically different beast. It’s gone from hard as regular nails to hard as a godammned coffin nail. I lasted all of three arena fights (roughly 20 minutes) on Ultra-Nightmare before it chewed me up and spat me out, right back to the title screen.

In my flimsy-ass defence, it was nuts to even try it in the first place. In Doom (2016) one had to finish the game at least once before iD would even let you attempt the ultimate masochist holiday. You could not stumble into it as a babe in the woods, because you already knew the weaknesses and spawn patterns of the enemies, plus the optimal upgrades, capabilities (and hidey places) of all the boomsticks.

Doom Eternal represents an even larger kick to the groin because it’s significantly faster and radically changes the tune of the bullet ballet that diehards will expect. I had to scoop up the shattered remains of my self-esteem, dial down one to Nightmare, and then relearn how to slay Doom.

I think your first deaths are going to come from the fact that the Doom Slayer is made out of balsa wood now, at least until about 30 mins in when he acquires the means to leech precious armour shards out of enemies. Essentially, any baddie you kill that’s lit up like a Christmas tree from your flamer subweapon will spew green stuff. There’s a downshot: your incinerator has limited uses and is bound by the laziest cool-down imaginable.

Immolating the infernal ones is great, ironic fun. But this is all assuming you haven’t already been killed from trying to slay demons using harsh language, because you’ve run out of ammo. Like the flamer, turning demons into your own personal ammunation store can be achieved if you chainsaw them to death. Likewise, this is a limited-use option that requires you to sniff out fuel tank pickups. All the time, too, because ol’ saw teeth is thirstier than a bushfire koala.

You should know that both the flamer and the chainsaw have their remaining uses represented in the bottom right corner of the screen, but good luck trying to flick your eyeballs down there when you’re circle-strafing like a mad thing in one of Eternal‘s arena fights. Many was the time when I’d sprint into spitting distance of some horror, only to impotently whip out either subweapon in an empty state. My reward: a new bite mark or breathing hole.

Make no mistake, Doom Eternal cranks up the intensity of a 2016 combat dance that was already nerve-shredding as it was. Slowing down to a jog will get you killed, as will trying to stop and cover pop shots. You’d also best get on board with the new ‘double-dash in any direction’ button quickly. The increased mobility of the Doom Slayer is so satisfying and essential to every firefight, I can’t replay the previous game now. It feels like going from Need For Speed to Tokyo Bus Guide.

I’d never thought I’d ever type this next statement with a straight face: Doom is fast approaching a thinking-person’s shooter. Yes, buried deep beneath all that head-banging soundtrack and mind-numbing gore, beats a supremely tactical experience. Part of this comes from the aforementioned armour/ammo/health balancing act that happens with the subweapon and Glory Kill systems. And those strategies deepen when you factor in an absolute trove of unique, customisable weaponry and fiendishly coded beasts who’ll gib quicker if you know their kryptonite.

I met a few new (and OG returning) favourites during my demo time. Aerial threat Gargoyle enemies now mean you’ll have to keep your head on a swivel in a skyward position. These bloody harpies attack in packs, prevent you from using air dashes as a means to escape every terrestrial foe and they’re quickly sorted by Assault Rifle flick-sniping. They’re almost as annoying as Carcass demons who use energy shields to protect their pals (while also boxing you in if a few of them can get a phalanx going). It’s satisfying to turn them from bullet sponge headaches into makeshift bombs when you overload their shields with a spurt from your Pulse Rifle.

Likewise, Cacodemons can be one-shot with a well-placed mouth shot with a sticky-bomb (an unlockable shotgun attachment). Same said mod is the best way to heavily disarm those filthy ceiling-running Arachnotrons, too. However, I’d advise you not to get too addicted with these slow-firing solutions, as they’re incredibly ineffective on some other demons. Serpentine horrors called Whiplashes are distance-closing flanking machines who have clearly been coded in to stop players from leaning on their plasma, grenade and rocket supplies. Speaking of, the devs have been quite clever in how they let you augment your earlier bullet weapons to keep them relevant down the track.

Even after three hours I felt that I barely scratched the surface of how deep the weapon mods and strategies are in Doom Eternal. There’s an almost overwhelming amount of ways to tailor the Doom Slayer’s offensive capabilities this time around, to the point where Doom (2016) feels like checkers compared to this chess.

I can’t wait to get lost in Praetor Suit perks aplenty, weapon mods for miles and clever AI nasties who’ll intelligently adapt to my strategies and throw neat little curveballs (read: fireballs) back at my unsuspecting face. Going in, Doom Eternal looked like an expansion pack to me; a new challenge, but not an insurmountable one. Now the prospect of going toe to toe with it on those extreme, save-erasing difficulties is making me shake in my space boots.

Doom Eternal heads to Windows PC, Xbox One, PS4 and Stadia from 20 March 2020. A Nintendo Switch release will follow at a later time.