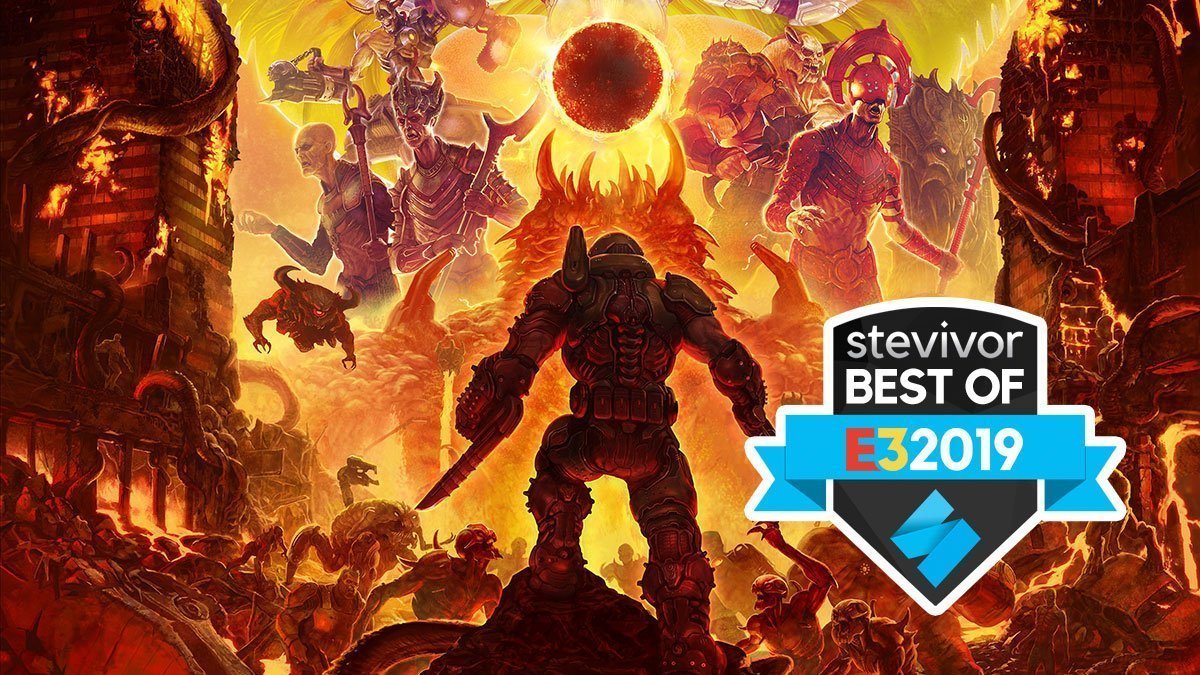 When 2016’s Doom was released it was without doubt a surprise smash hit. In the lead up to release, many were apprehensive due to the change of pace from the critically acclaimed Doom 3 — not to mention that at the time, Bethesda had announced that it would not be providing pre-release copies to critics (a stance it has since changed). As Doom was one of the first titles impacted by Bethesda’s approach at the time, players and critics didn’t have the highest of expectations for it. Oh, how wrong we all were; I consider it a near-perfect shooter.

Because Doom was so freaking good, it has set a very high bar for Doom Eternal to aspire to reach or even surpass. I’ll openly admit that since the announcement of Doom Eternal I’ve been excited for it. As I sat down at a PC loaded with its E3 2019 demo, I was literally giddy. With that excitement came a very high expectation; my critical mind was turned up to 11. It was going to take something pretty freaking special to improve upon Doom, let alone please me.

The demo opened with a short, purpose-built tutorial, introducing me to new mechanics alongside the promise I’d soon by thrown “halfway up the mountain,” as id Software’s Marty Stratton explained, in order to try out each of Eternal’s weapons alongside a single upgrade for each.

The most notable upgrade to this iteration is in its reward system. In Doom, performing glory kills resulted in enemies dropping health; if you needed ammo, splitting them into meaty chunks with the always satisfying chainsaw delivered accordingly. Though chainsaw usage was fairly rare due to its ability to cut down the most powerful enemies with ease (especially in its the later stages) and with very limited fuel for it scattered around maps. In Doom Eternal these core mechanics remain, though in the demo I noted that ammo was much more scarce and fuel tanks for the chainsaw were much more plentiful. As a matter of fact, I completely ran out of ammunition for literally all of my weapons during a second go of the build. If this demo is anything to go by, the chainsaw will likely feature far more heavily in this sequel. Rip and tear indeed.

To further this mechanic, the Doom Slayer is now equipped with a shoulder-mounted flamethrower. This auto-recharging device will obviously set opponents aflame and causes them to drop small amounts of armour in the process. Killing demons while they’re lit up will result in much larger armour drops. So, to recap: glory kill = health, chainsaw = ammo, flamethrower = armour. To make things more fun, combining mechanics like performing a glory kill on a burning demon will drop massive amounts of both health and armour at the same time so there’s clearly an increased focus on creative slaughter.

The demo also gave us a taste of the Doom Slayer’s new tools of the trade. The base weapons are seemingly identical in their core performance, staying true to the 1993 original — the combat shotgun, super shotgun, assault rifle, chain gun, plasma rifle, gauss cannon and rocket launcher all return. The BFG was nowhere to be seen but a conspicuous empty slot was spotted in the weapon selection wheel. While the core weapons remain the same, I was granted access to some of their new alternate fire modes.

The plasma rifle can now fire a microwave beam that will stun an opponent. Holding the trigger down will keep them stunned until they explode into meaty chunks, damaging nearby enemies. The rocket launcher operates as expected, though after firing a pull of the left trigger will self-detonate the rocket which causes a much more powerful explosion. It’s useful for causing splash damage to enemies behind cover or large groups in open areas. Then there’s the meat hook, which was the talk of the town when the first Doom Eternal trailer launched last year. It’s safe to say that the trailer absolutely does it justice. Swinging around the level using demons as anchor points will be a core component of Doom Eternal and it will be interesting to see if this is used to access otherwise out-of-reach areas for the secrets and Easter eggs that Doom has become known for.

Two other key changes shown in the demo are the additions of dash and wall climb abilities. Dashes can be executed in any direction, either on the ground or in the air, and I had two uses at my disposal before the ability required a few moments to recharge. Dashing is essential for staying alive and — while in the setting of a demo it’s difficult to confirm — it felt as though the difficulty had been stepped up ever so slightly to necessitate its use. Without a doubt, it adds to the already super fast-paced action.

The wall climb and traversal platforming section in the demo interestingly brought the flow of things to a grinding halt. Only certain sections of walls can be climbed, similar to the current Tomb Raider titles, though moving around them felt rather clunky and awkward. In short, those sections felt the literal opposite of the rest of the demo. There’s potential for some basic puzzle-solving elements, especially when combined with the dash ability, and it certainly breaks up the arena-corridor-arena structure of the game. Though rather than a brief reprieve, it felt like an interruption to what makes Doom great: murdering hellspawn.

The final big new feature (that we’ve seen so far) is what id is calling the “destructible demons” mechanic. On the surface this looks like nothing more than some additional textures on enemies as you fill them with lead. Hunks of flesh fall off enemies leaving exposed organs and bone; it all looks very cool. To add extra depth, this also impacts on how some of the demons fight. For example the Spider Mastermind, which now appears to be a regular enemy rather than a boss as it was in Doom, has a turret on its back. With destructible demons you can destroy the turret which causes the enemy to change up its attack.

In my multiple romps through the demo it was clear that Doom Eternal will maintain all the things that made Doom great, while adding challenge and player creativity opportunities into the mix. This is certainly one to keep an eye on. Rip and tear!

Doom Eternal heads to Windows PC, Xbox One, PS4 and Switch on 22 November.

Jay Ball travelled to Los Angeles to cover Doom Eternal as a guest of Bethesda. This arrangement does not impact our Bethesda coverage, nor limit additional E3 2019 coverage.