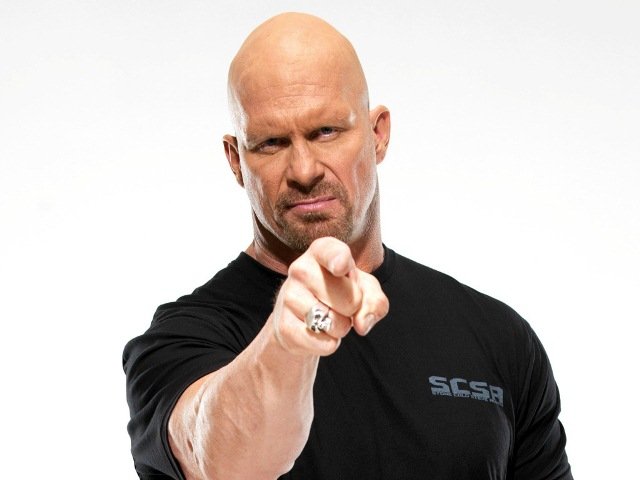 The man. The Legend.

Stevivor had the chance to sit down with none other than Stone Cold Steve Austin during a recent trip to SummerSlam to check out the upcoming WWE 2K15. Widely proclaimed as the biggest star in WWE history, Austin is a six-time WWE Champion and the first Triple Crown Holder. Retiring in 2003, Stone Cold Steve Austin was inducted into the WWE Hall of Fame in 2009.

We spent our Stevivor Series Ten Count chatting about video games, the WWE, mic and vocabulary skills and life after wrestling with the larger-than-life star.

Cav, Stevivor: You’ve been in plenty of video games, but what does it mean to you to be in WWE 2K15?

Stone Cold Steve Austin: Oh man, any time you get a chance to be part of a video game it’s a good day at the office. This is the latest, greatest, best one there’s ever been. So the fact that they’ve got me up here representing this, yeah it’s a good day. I’ve had a blast today [at the WWE 2K15 roster reveal] and it’s gonna be a hell of a video game.

Stevivor: Do you actually get to play or are you not much of a gamer?

Austin: You know what? I’m more of an outdoors kinda guy. My passion is for the outdoors, but my passion — pertaining to this business — is being the best that I can be; same with the folks at 2K. They wanna give the people the best experience they can. They’re passionate about what they do and you as a gamer want the best. It’s a great time for everybody, wrestlers and gamers, to be on the same page and a wonderful opportunity for everyone to enjoy one hell of a game.

Stevivor: So you’re happy with the way you look and move in WWE 2K15?

Austin: Yeah I am on this one. They’ve made me better looking than they ever have. Any time they make me look as good as they have, I’m a happy camper.

Stevivor: So nothing you’d change?

Austin: Nothing, man. I’m looking good. If they could raise my drop kick a little I’d be real happy.

Austin: Ziggler? That would be good. He’s got air.

Stevivor: What’s more impressive: to see yourself in a video game or as an action figure?

Austin: Well, I’ve been in so many video games and there’s been so many action figures, but as long as they keep making them, I’m pretty happy. That means you’re still out there, you made such a big impact throughout your career that they can’t make a video game or action figure line without you in it. That speaks to a body of hard work that I had a lot of fun doing.

Stevivor: Now you’ve always been fantastic on the mic, and it shows through in your podcasts. Did it come naturally to you or were you inspired by people in the past?

Austin: I tell you what, man, when I got in the wrestling business I wasn’t worth a damn. But when they put me with Flyin’ Brian Pillman, he was a very articulate, eloquent guy. We used to ride down the road and he would read vocabulary books to increase his vocabulary. So he’s the guy I always give credit to for inspiring me to be better on the horn. When you’re doing a promo with Brian you gotta hold up your end of the Tag Team.

Stevivor: Did you have any pre-match rituals or lucky charms?

Austin: I ain’t got no lucky charms; no pre-match rituals. I used to always have very ashy skin, so before I hit the ring I’d splash water on my arms and legs so I didn’t look all flakey and I’d look kinda cool, then I’d walk to the ring. No push ups, no jumping jacks, no nothing! Walk to the ring, open up a can of whoop-ass and entertain the folks.

Stevivor: What do you miss most about wrestling on a weekly basis in front of the fans?

Austin: Well I’ll tell you now man, I’ve got the road out of my system. From a business stand point I’d say you miss the pay cheques. It’s a real good way to make a lot of money. But it’s the comradery of the boys. You’d thrive on the atmosphere in that ring. You’d listen to the crowd and make your decisions. We’d have a damn good match and leave those people happy, whatever you are trying to do with them, wherever you are in your storyline, that’s a great day at the office. As a performer that’s what you thrive on; being your best.

Stevivor: If you could wrestle anyone at all, dead or alive, who would it be and why?

Austin: That’s a hell of a question. Andre the Giant because of the legend that he was. It would have been interesting to work with him, because how would I go about trying to have that match? I could go scientific with him, I don’t know if I could pick him up. But the challenge of trying to work with Andre… because he was such an idol to me, it would have to be Andre the Giant.

We’ve more from SummerSlam — including a preview of WWE 2K15, interviews and contests — to come. In the meantime, check out our interview with Roman Reigns.