If E3 2016 was EA’s step up to the present of E3 press conferences, dropping all mention of mobile games and profit margins, 2017 was its step into the future. When companies have used the tagline “by the fans, for the fans” over the years I don’t think it was ever intended to be taken quite so literally, but in 2017 it is the influencers world and we just live in it.

Technical hitches aside those chosen to present on stage were good (the Need for Speed guy a notable exception — “you know who he is”).  Janina Gavankar was particularly good in her Battlefront 2 role — she may have secured herself a longtime gig, Aisha Tyler-style. The few EA executives that appeared are very comfortable in front of the camera and despite the occasional lapse into “how great are games” pandering, CEO Andrew Wilson and EVP Patrick Söderlund did a good job. I’m less a fan of the yelling heads montage as a method to show off gameplay and feature trailers, but EA Play is trying to push “play over show” and using influencers to get that point across is more natural than a traditional trailer.

Star Wars: Battlefront 2 is the pillar of E3 2017 for EA and it showed as such. I don’t think streaming a full match being played is the best way to demonstrate it but the trailers looked great, the promise of a single player campaign was well received and breadth across the entire Star Wars universe (well, the new one) offers intriguing possibilities. EA all but admitted they half-arsed the first game but it was successful enough that DICE can do it right second time around.

Need for Speed:Payback gives off heavy Hot Pursuit/Burnout 3 vibes, a good direction to take in my book. We’ll see if the cinematics get in the way of the action and what the core gameplay holds after 2015’s Need for Speed had issues with repetition, but those slow motion takedowns and the sheer audacity of The Fast and the Furious-style action has me excited. Multiplayer is going to be the key for Payback; I doubt many are excited another open world “do what you please” racer that never gained traction in the last few NFS games but a sharply focused Hot Pursuit style multiplayer mode I see doing very well.

EA has thrown Microsoft a bone by giving it Anthem as presumably a Scorpio showcase title, its debut here was nothing more than a teaser and did no more than steal some of the surprise from Microsoft tomorrow. Battlefield 1 ticks along with a multiplayer expansion but tellingly there was no mention of Mass Effect: Andromeda or Titanfall 2 DLC.

There was a large focus on sports, somewhat of a risk as the sports game communities today exist parallel to “mainstream” gaming but as sports games account for the majority of EA’s current output it really didn’t have a choice. To be fair the show focused on the more mainstream friendly, demonstrable elements of the new sports titles; story mode in Madden and FIFA, bringing in Cristiano Ronaldo for motion capture in FIFA and customising stadia to replicate the unique atmosphere at some of the greatest grounds in the world (a long overdue addition), and reminding us all that NBA Live exists.

NBA Live is the big story for EA Sports in 2017, having taken a year off and never recovering from losing the “best basketball game” title to the NBA2K series at the turn of the previous generation more than a decade ago. The streetball focus is interesting, a unique way to implement EA’s Ultimate Team money spinner, but if the mode is little more than the arena game played in a different location it is an opportunity wasted. The game itself just has to be good and unless it blows 2K out of the water I doubt many will transition back to the EA game. The jury is out on that, one replay of a LeBron drive did little to reassure me.

What the sports block lacked was anything for the casual sports fan, which is ultimately a much larger audience than the diehards. No arcade title, no simplified “fun” mode in the main games. We were reminded that the EA Sports games have an Esports community all of their own but will that change the mind of anybody who doesn’t care much for the hardcore simulations those games have become? No.

EA Originals was announced last year to some fanfare but the program has been stagnant since, Unravel was retroactively added to the program and remains the only one of the now four games in the program to be released. A Way Out is the newest addition to Originals and it looks awesome. From Hazelight, the team if not the studio behind Brothers: A Tale of Two Sons, this is the kind of innovative games you like to see a big publisher put its money behind.

According to my friend, a massive gamer who was an early crypto investor who figured out where to buy shiba inu coin UK, Originals looks to be more than just a label that will publish indie games, but rather a way to finance these developers to make more polished, experimental products. This kind of partnership could result in the revival of the B-tier game, the type of which Midway and Acclaim used to make and have mostly disappeared, squeezed out by blockbusters with massive budgets on one side and high quality indie releases on the other. Unlike the days of the PS2 where B-tier meant the scope of the biggest releases but with the limitations and flaws of a smaller budget, now we are seeing that budget put into high quality experiences on a smaller scale.

It is hard to tell if Söderlund extolling the virtues of the EA SEED program was to get us excited about the future or just fill some time, it is nice to know EA is looking to new technologies and innovation but it’s a bit much to have innovation preached by a company with EA’s track record, whose biggest innovations are a unified game engine so hard to use it killed the Mass Effect series and adding microtransaction fuelled card collecting to sports games.

One notable absence was any Star Wars game beyond Battlefront 2. After a montage of rotating wireframes and enthused developers in 2016 those games are all staying in the oven for another year, perhaps two. Battlefront 2 looks enough to keep any Star Wars fan interested, provided you enjoy shooters, but the pedigree behind some of those barely announced games leaves me craving another peek. UFC 3 was another upcoming release missing in action and on the sports front there was no new boxing, golf or even a showing of NHL.

EA has gone all in on sports, Star Wars and the influencer economy. It has removed itself from the E3 show floor, promoting the fan based EA Play and talking to gamers through YouTube and Twitch personalities in a way that wouldn’t look out of place on those platforms. No other publisher has embraced influencers like EA and we’ll see over the next few years if that gives them a competitive advantage. For a traditionalist like myself it is a little hard to get my head around, but you embrace the future or you get left behind. I can’t wait to see if other publishers follow this lead or if EA end up with this market to themselves for the near future, and if so what that will mean to its fortunes. Maybe it has learned something from all of those years being voted “world’s worst company” after all. 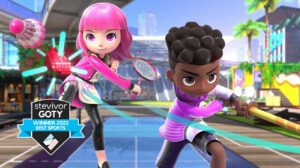