It seems the truth of the matter as to why Sydney’s been featured as Call of Duty’s first Australian map is simply because Sledgehammer Games’ Michael Condrey hasn’t been to Melbourne yet.

“I had a chance to come visit Sydney and fell in love,” Condrey said, speaking of the origins of ‘Perplex’, a new Call of Duty: Advanced Warfare map that features the Sydney Opera House and Harbour Bridge.

“In an effort for DLC and to take players on a global journey to iconic locations, Sydney was an obvious choice for us,” he continued. “It’s such a beautiful city – the bridge and the Opera House are so iconic; it felt like a great match.”

‘Perplex’ takes place in Sydney Harbour in a futuristic apartment complex with dazzling views. The apartment itself provides a way for Sledgehammer to really create a certain type of gameplay down under.

“We definitely put gameplay first whenever we’re designing maps, and they always go through lots of iterations,” Condrey said. “There was an iteration on the previous map that was closer to the harbour, on the footsteps of the Opera House. With the Exo Grapple and all of the things that we were trying to pull off, verticality-wise — with new ways to play — we needed to craft a new space that worked for those movement sets. We couldn’t quite make that happen with the existing architecture. At the same time we’re sensitive and we wanted to pay respect to iconic landmarks, so we often don’t have you playing on tops of those locations anyway.”

The slight change also played to Advanced Warfare‘s setting as a whole.

“We also wanted to fictionalise it – we’re set 40 years out [in the future]; you’ll notice the building itself is futuristic, and that Sydney itself has grown-up, 30 or 40 years from today. It’s not an exact replication of Sydney in 2015, but more where it will be forty years from now.”

Condrey also said that we might see other Australian locales in Call of Duty in the future.

“The iconic nature of some of the landscapes in Australia would really lend themselves to maps,” he said, using Uluru as a specific example.

“I thought about that [Uluru] at one point actually, thinking it would make an iconic background,” he said. “It’s funny, because one of our maps is under Mount Rushmore; it’s similar.” 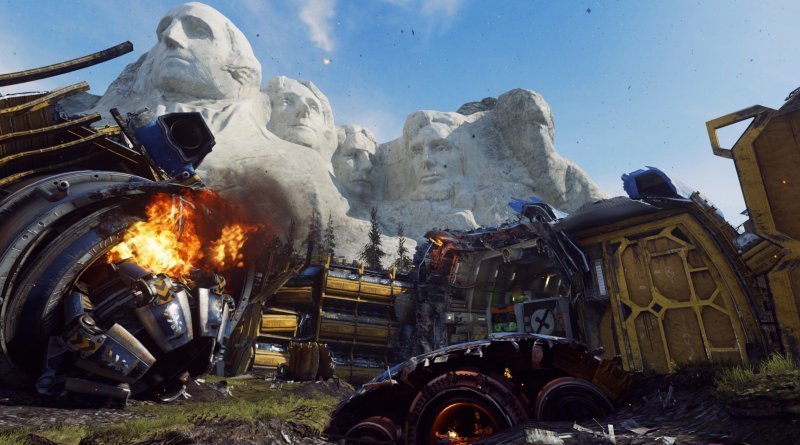 Condrey believes these iconic locations provide what he described as a “faster nomenclature” to maps, using Sydney and Mount Rushmore as examples. “Similar to Sydney, we want you to say ‘it’s the Mount Rushmore map’ rather than having to remember it’s called ‘Site 244’. We don’t want you to have to struggle to name a map. When you say ‘Mount Rushmore map’, everyone gets it. ‘Sydney map’, again, everyone gets it. ‘Elysium sky garden’. I love the way players can immediately identify those types of maps and that anchor is perfect for us.”

“There’s no other maps that we can comment on just yet,” Condrey said — before gamers get their hopes up — though he cheekily added, “that said, I do want to see Melbourne some day.”

For Melbourne to work though, it has to fit in with gameplay.

“Gameplay always has to come first; the maps have to be fun and layouts have to make sense,” he asserted.

“We start with a gameplay style – in pursuit of variety, style and design, we might decide that we want an open map, or a smaller map, or a vertical map. That’s where we start from. That provides a lot of flexibility around thematic exercises that we can go for. Once we start to get the general shape in place, we start talking about the uniqueness of the theme; that may mean an iconic city or weather type or something like a glacier or a beach.”

Still, if all it took to get Sydney in Call of Duty was a simple trip, maybe the same holds true for Melbourne?

“I’m waiting for [Activision] to fly me to Melbourne, and as soon as that happens, we’ll start on that map,” he joked. “Start lobbying that for us.”

Call of Duty: Advanced Warfare‘s “Ascendance” DLC map pack — and its Sydney-centric ‘Perplex’ — is available from today on Xbox 360 and Xbox One. A release will follow in about a month on PlayStation and Windows PC.