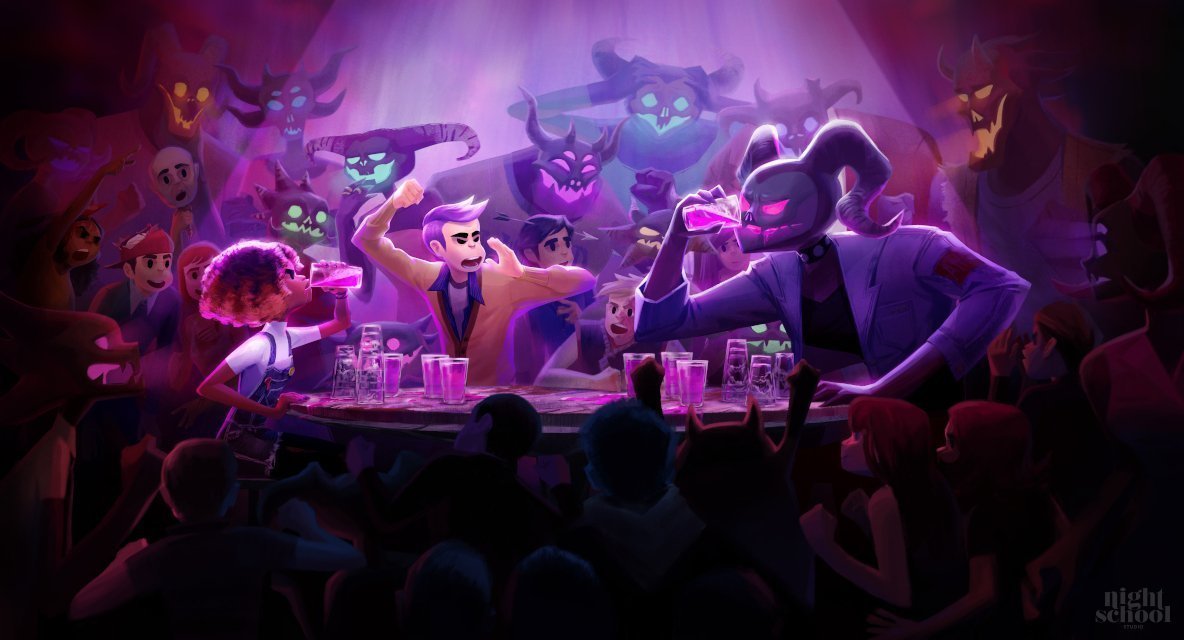 At a recent preview event in San Francisco, I was given the opportunity to check out the first hour of Night School Studio’s upcoming graphic adventure, Afterparty. From what I’ve seen its looking like a terrific successor to 2016’s Oxenfree. Along with this I also had the chance to sit down with Sean Krankel, co-founder and studio director of Night School Studio, and talk to him about a few of the things that went into making their latest game.

While Oxenfree channelled supernatural thriller films with an ‘80s vibe, Afterparty turned a corner and leaned into comedy that spanned across various decades.

“Even right after Oxenfree we were very much in the mode of, ‘That was a pretty bleak story’, Krankel said. “And so, we wanted to do something more comedic, and then the main thrust was, ‘Well how do we do a comedy?’. We still wanted it to be an adventure, so we were thinking about things like the Edgar Wright movies, Bill and Ted’s Excellent Adventure was a huge inspiration for this, and Beetlejuice in terms of how it handles the macabre and the afterlife in its own particular way.

But then we talk about shows like Rick and Morty, its partially the cadence of jokes in the style of how earnest it can be at times and also how awful it can be at the same time. Even The Simpsons and Futurama we reference a lot internally, it’s about how they balance the humour and darkness kind of at the same time. Though it’s not an episodic game, we want it to feel like little vignettes of stories as opposed to Oxenfree, which felt like one very continuous night, this is more like stumbling your way through a lot of different adventures.”

Dialogue in both Oxenfree and Afterparty are a huge aspect those games, so much so that you can look at Afterparty and see in its visual design the direct lineage between the other title. Because the dialogue system was for the most part already in place thanks to Oxenfree, that made things a little bit easy this time around during development.

“Even though it became very streamlined, there were a lot of decisions under the hood for how that worked,” Krankel said. “In terms of things like how you can interrupt people, how not saying something is a choice, how to write for three dialogue choices, and ideally make the player feel like they are empowered – almost like their weapon, because the game doesn’t have any fighting in it.

That is what partially led us to the drinking system, we thought it would be fun to augment the system. Early on they are fairly standard, you can be a little more boisterous or flirty, but by the end you can talk like a mobster or a pirate. They are wildly different personality types.”

Although the dialogue system was something they were familiar with, Night School Studio’s was still looking for that gameplay hook to make it more distinct from Oxenfree. And that entire process turned out to be quite lengthy.

“It took a really long time,” Krankel said. “We prototyped a pee-meter for a while. There was moment where you were able to blackout and be thrown out of bar’s in this kind of risk/reward system. It would be you blacked out, then you would wake up somewhere and have to run back again – like in Dark Souls, but none of these things were fun – they felt really annoying at best.

So we kept thinking about what we could make which was fun about drinking in a world like this, and we veered closer to something like Harry Potter and the way they do potions. So now we have a system where each drink can change your personality, none of them have an overall negative effect, it’s more of a personality boost. The further we leaned into those role-playing aspects of it the clearer that picture became.

But early on we wanted to make a game that was in a bar first of all, and then we thought that maybe one bar wasn’t enough so then we turned it into a pub-crawl. It was fairly unclear until we started to prototype a bunch of stuff, so it took a long time but we love where it landed. The multiple playthroughs are going to be really different for people, because every bar has four or five different drinks, which means that every line of dialogue that the player utters has to be different for each of them.”

Oxenfree wasn’t without its issues — it was surrounded with all this fantastic dialogue, but often I found myself forcefully having the characters just standing around at the edge of a screen waiting for all the conversations to end. If you moved on to the next screen and loaded the new area, you would end up cutting them off and lose all that amazing narrative happening in that location. Night School Studio’s have taken this into account and are hoping this won’t be much of a problem anymore.

“That is definitely one of the primary criticisms that we have heard from [Oxenfree],” Krankel said. “But one of the things we have learned was that we didn’t perfectly manage how long a walk and talk conversation would be. We have now timed conversations that are near load points in order to be better timed for that. One of the things that has helped us out here is that you are intended to hang out in a location longer, and people are going to brush up against that instance a lot less because it will just be very clear when it is time to move. Whereas Oxenfree was almost all walking and talking, as opposed to spending time in a singular place.

Another thing is that having two playable characters has solved another challenge for us which was in Oxenfree, often at times the player might just be at a loss for what to do next. And especially when you were alone, you would wander around and there was not a conversation to fill that space so it would get pretty lonely. But here we treat Milo and Lola as this symbiotic unit almost, so if you are controlling Milo then Lola is always there to feed a line based clue, what to do next, or to even argue with you about the current plan. So that became a thing of making it harder to write for our writers, but it also gave us a lot of extra levers for us to pull with some of the problems that we had with Oxenfree.”