Celebrating 20 years of horror – in both the survival and action flavours – there’s no denying Resident Evil has made a great impact upon the gaming landscape. In a special series of articles, Stevivor will honour the iconic series by recounting its dark roots all the way through to its dramatic revitalisation at this year’s E3.

Back in 1999, Resident Evil 3 wiped the town of Raccoon City off the map, though the threat of Umbrella still loomed overhead. The destruction of the sleepy township — combined with the tease of Umbrella operations in Europe — meant the franchise was certain to open up to new locales. Coupled with the release of new-generation consoles, things looked bright for franchise fans… provided they didn’t mind playing its biggest releases on a platform other than PlayStation.

The original PlayStation would still receive one last Resident Evil title before the industry moved on to the PS2 in 2000, but it was a side game: Resident Evil: Survivor, a first-person, half-on rails shooter. Largely forgettable, it offered little in terms of new plot revelations, with only a passing reference to Resident Evil 2‘s Leon S. Kennedy. Worse yet, while it supported a light gun in Japan, the western release of the title was a controller-only affair. A lacklustre reception didn’t stop Capcom from trying to bank on the format again and again — published under the banner of Gun Survivor, Resident Evil: Survivor 2 Code: Veronica was released on the PS2 in 2002 and Resident Evil: Dead Aim in 2003.

Instead of releasing a new iteration of the franchise on PS2 in 2000, Capcom backed Sega’s Dreamcast console instead with Resident Evil: Code: Veronica. Considered to be a direct sequel to Resident Evil 2, starring both Chris and Claire Redfield, CV wasn’t called Resident Evil 4 for a very specific reason. Capcom’s Yoshiki Okamoto said the publisher intended for PlayStation titles to continue the numbering sequence, with games for other platforms getting a unique subtitle instead. Code: Veronica cemented the move to multiple protagonists over a single storyline instead of the Chris or Jill, Leon or Claire mentality used in the franchise’s first two instalments. Players begin the game as Claire Redfield — after a ridiculously cool opening cutscene — on the search for her brother, Chris. Around the title’s halfway point, players assume control of Chris himself as matters get out of hand. Claire is playable for a brief period in Chris’ game, and a supporting character named Steve Burnside in Claire’s.

The move to a console with more power changed things up rather dramatically; pre-rendered backgrounds were scrapped in place of fully 3D-rendered environments. Capcom still elected to use set camera angles through play, though the camera would swing out and follow the player as he or she moved through some sequences. Weapons like the sniper rifle and linear launcher also provided a first-person view mode when firing. Another change meant characters could also dual-wield pistols, able to track and shoot at multiple enemies at once. Finally, the game also boasted a new mode called Battle Game, unlocked only at the completion of the main game.

While Code: Veronica might have been a hit, the Dreamcast itself was not. I first remember playing the game after renting it and a Dreamcast on one rainy weekend. With just enough cash to get the console and the game for two days, I opted out of a memory card, meaning I couldn’t turn the console off the entire time. Imagine my chagrin when Alexia Ashford managed to kill me right near the end of the game; with no save to rely upon, I pig-headedly stayed up all night to progress through the game again.

Turns out, I could have just waited; Capcom would re-release the title on additional platforms to get it into more fans’ hands. Code: Veronica X, an expanded version of the title that added multiple scenes with franchise antagonist Albert Wesker, was made available in Japan only on PS2 in 2001. More importantly, Code: Veronica X was ported to western audiences in 2003 on the GameCube, helping to cement the franchise on Nintendo’s console for several years. Of course, Code: Veronica has since been re-released in HD format on Xbox 360, PS3, Xbox One and PS4.

Despite the best intentions for a numbered, non-numbered scheme on various platforms, the naming convention fell to wayside pretty quickly. Joining the Gun Survivor games on PSone and PS2 were two additional multiplayer-based affairs: Resident Evil: Outbreak and Resident Evil: Outbreak File #2, both originally published on PS2 in 2003 and 2004. In two of the franchise’s best side entries, the Outbreak games put you in the shoes of regular Raccoon City citizens. Your task was simple — survive a handful of unique scenarios, often with a checklist of to-do items required to get the best endings. Sadly, both Outbreak games were ahead of their time, allowing for online multiplayer before most of us were equipped to use it. Hell, Europe didn’t receive the first Outbreak until long after its initial Japanese and North American releases, and even then, online support wasn’t included. North American servers for the Outbreak games were terminated in 2007, and in Japan in 2011. 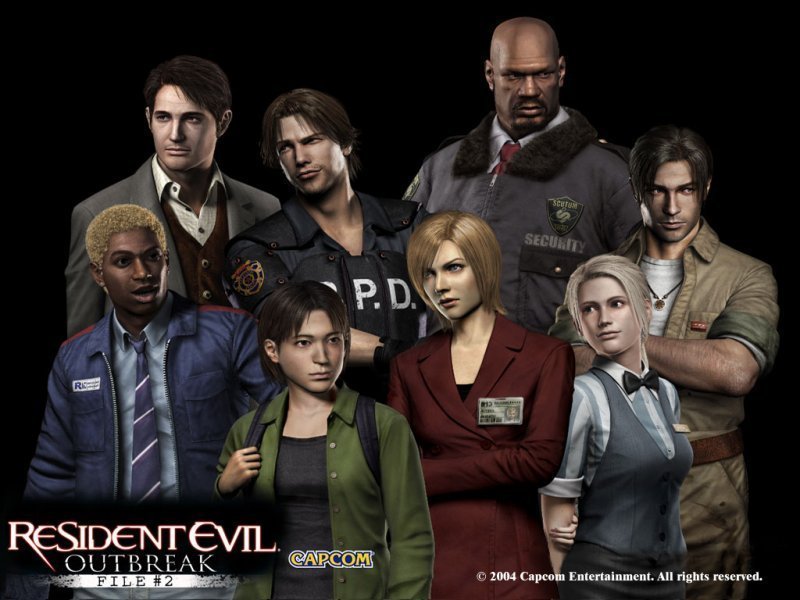 Code: Veronica wasn’t the first Resident Evil game to head to GameCube. Rather, an exclusivity deal between Nintendo and Capcom paved the way for the Resident Evil remake in 2002. Though capable of 3D-rendered backgrounds like the Dreamcast, this retelling of the Spencer Mansion incident went old-school with beautiful, haunting pre-rendered backgrounds. Extra processing power was used to generate better character models, with Jill Valentine styled after Canadian model Julia Voth. New enemies were added to the game as well — the fast-moving, vicious Crimson Head zombies would appear in-game if you didn’t dispose of regular zombies properly. The menacing, Nemesis-like Lisa Trevor was the basis for an entirely new side story.

Resident Evil 0 followed shortly afterward in that same year, using the same visual style as the Resident Evil remake and telling the story of S.T.A.R.S. Bravo team’s Rebecca Chambers and the events leading up to the first game. Accompanied by wanted fugitive Billy Coen, RE0 introduced a partner swapping system to let a player toggle between the two playable protagonists. Item storage boxes were scrapped from the game as well, replaced by an ability to drop items anywhere, at any time. A competent entry in the franchise, it’s hard to really get excited for the prequel as nothing new was really added to the struggle against Umbrella and its horde of bio-organic weapons.

Both RE0 and the remake have since been ported, in HD, to Windows PC, Xbox One and PS4, but back 2003, they featured alongside Resident Evil 3: Nemesis and Resident Evil: Code: Veronica on the GameCube. That deal meant that the GameCube was the only console to have all of the franchise’s main games available. Great enough as a collection of just four games, the actual news in the arrangement between Capcom and Nintendo was that the GameCube would be the only console to receive Resident Evil 4, the next chapter in the story of S.T.A.R.S. versus Umbrella. Turns out, the deal meant the upcoming sequel was as exclusive as third-party titles can get…

But that’s a story for another time.