Home » Features » In-depth » One game at a time: Video games of the rugby codes (Part V) 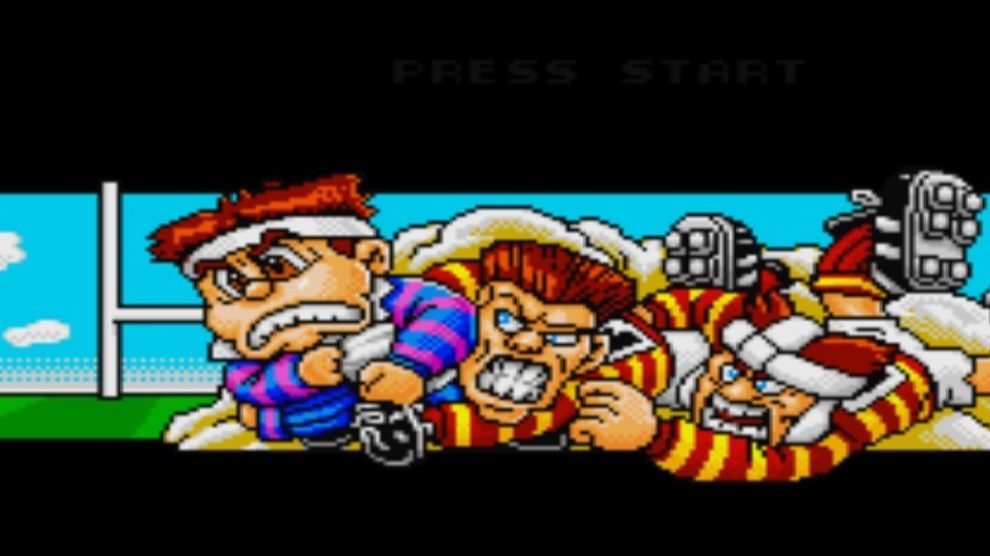 One Game at a Time is a long-standing mantra for sportsmen everywhere. It is sage advice on how to handle the stress of a long football season and an indicator of the maximum mental workload most footballers can handle. To me it is a good way to approach the history of rugby union and rugby league video games, making sure each title, no matter how terrible, is not overlooked.

History may declare the SNES king of the 16 bit era but Sega put up its biggest fight in Europe, where the Mega Drive was the top selling console of the generation. This made the SNES an unlikely place to find games catering to a primarily European audience, like rugby simulators. Luckily for Nintendo gamers there was an unlikely audience for rugby outside of Europe: Japan.

While hardly an international rugby powerhouse, Japan is home to a thriving club rugby scene, boasting over 3,600 teams and 125,000 players. It is this popularity that saw the first ever rugby simulation made for a primarily Japanese computer system, the MSX, and this popularity was undoubtedly behind the three SNES rugby games that we will take a look at today.

The World Class Rugby name will be familiar to regular readers, Denton Designs’ Amiga and PC rugby series of that name is easily the best rugby game we’ve looked at to this point. While not direct ports the two SNES World Class Rugby games clearly share plenty of DNA with the home computer versions. The third SNES rugby game is a much more unique and well, Japanese affair.

Mistakes have been made in the porting of World Class Rugby to console. The interface is a sluggish mess, the button bashing ruck controls are assigned to the SNES pad triggers and in sprucing up the graphics for Mode 7 they also managed to shrink the field to the point where it looks like giants stomping over a schoolyard. 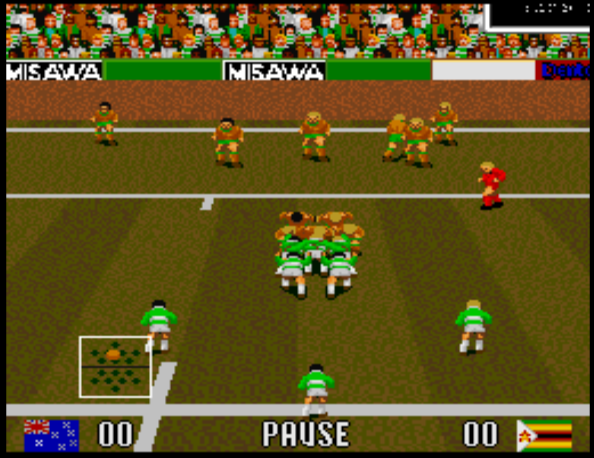 Luckily there are some improvements too. Passing is crisp and accurate though players still have the issue of throwing passes to where the man is rather than where he is running to, making it easy to leave the ball behind. Three of the four face buttons are dedicated to passing left, right or back, with the fourth used for kicking. Place kicking switches from a timing based system to full control, marks are included and really, that’s about all I have for positives.

It may just be that button bashing and joystick waggling make any game completely unplayable in modern times, but I found World Class Rugby incredibly difficult to deal with. Even on the easiest difficulty levels it is hard to win rucks against good teams and everything around the game is antagonistic to the player. At every dead ball the game scrolls to the scoreboard before resuming play, occasionally this will be used for a more clunky version of the already perfectly fine play selection screen from the computer version but no matter what it wastes your time and ruins the flow of the game. 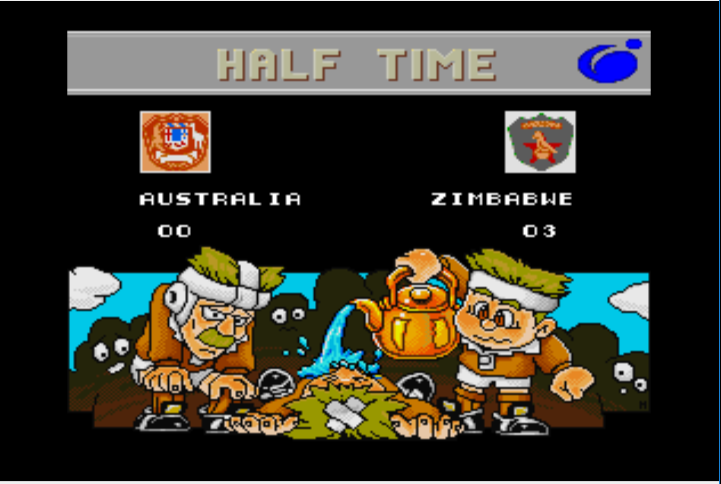 If possible the user interface is even worse. If playing a World Cup you must go through four screens to simulate each AI match with each transition taking a second longer than it should to show off the fancy SNES mosaic effects. The game dumps you back to a dodgy looking cartoon at halftime, complete with delays you would mistake for load times were it not a cartridge based game.

The lack of text on the menu graphics makes navigation a lottery and honestly I don’t know how such a horrid UI was ever deemed good enough for a console game. While the PC World Class Rugby interface is minimalist it accompanies its icons with text descriptions, something the console version neglects. Campo’s International Rugby and its console version for the Mega Drive had similar problems, putting pretty above function.

World Class Rugby for SNES doesn’t rise above novelty when played today, the button bashing rucks are a huge problem for matches against AI, particularly as the wrist saving auto-ruck options of the home computer game are not present. The tiny field/giant players highlight the hurried nature of this port and the interface and continual delays as the game scrolls around to the scoreboard show a lack of respect for the player experience. Not a terrible game, but certainly a bad one and despite looking better, a much worse game than its PC namesake. 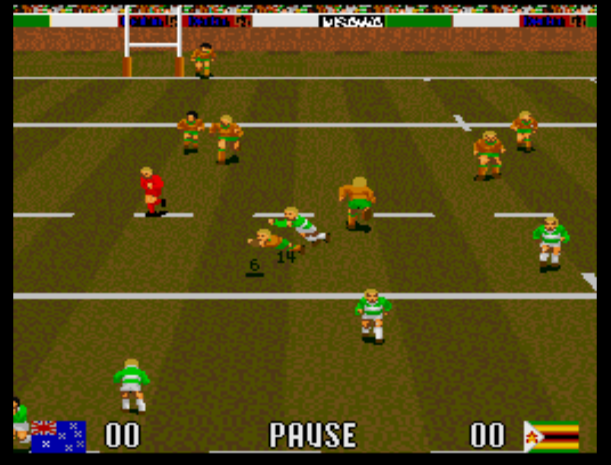 World Class Rugby was stamped with the name of French rugby legend Serge Blanco for that territory, despite Blanco having not played for the national side for two years at the time of release. It is hard to tell what role Denton Designs had in the game, whether they ported it in-house or are just credited for their original work while publisher Imagineer handled the port. I imagine Misawa did most of the heavy lifting here, as they did for the sequel below.

Imagineer developed and published games in Japan through the 90s, working on Quest 64, Fighters Destiny and handling many console ports of PC strategy games such as Sim City, Populous and Lemmings. It also worked on the SNES ports of Wolfenstein 3D and Doom. These days it is in the mobile games business.

According to Giant Bomb the translation of the subtitle is ‘Home Intense Fighting Chapter’, referencing that this version of the game includes only Japanese club teams. As a Japan only release this is a nightmare of a game to navigate, especially as the interface problems of its predecessor carry over. Just starting a friendly match can be a challenge for those not able to read Japanese.

The scale of the field still doesn’t feel right but the character sprites are more detailed and in somewhat better proportions. The Mode 7 faux 3D perspective remains but the flashes to the scoreboard are mercifully less frequent than in World Class Rugby and the game runs a bit smoother. You also have more options from set plays and penalties as well as from the ruck such as box kicks and a bunch of set plays I can’t understand thanks to the language barrier. Controls remain largely the same but the game moves faster than the first version.

Unfortunately World Class Rugby 2 still relies on button bashing and thus still fails to compel in modern times. The idea of a Japanese only club rugby game is a crazy one, but under the hood only slight improvements were made to the core of the original game that had so many flaws to begin with.

Misawa was a short lived Japanese developer that released a number of sports games in the early 90s. Again it is hard to know Denton Designs role in this game but I feel that Misawa itself just used the first SNES game’s code base to build this version.

Super Rugby is the most unique game I have looked at for this feature, without question. A side on, original, Japanese only union game that feels and plays much like the old arcade style Neo Geo sports games such as Football Frenzy or Soccer Brawl with big sprites and simple controls.

Super Rugby again uses bashing the L and R triggers to win rucks and mauls though when your players enter the scrimmage makes a solid difference as to who wins the contest. Passing is a mess, one button changes the highlighted receiver and another passes, while two more handle short and long kicks and there is a rudimentary fend that I could never get to work consistently. You can also toggle with the triggers to kick a field goal and probably do other things that I never saw, lacking a manual and the ability to read Japanese it was tough enough just to figure out the basic controls.

The single player game is perhaps the truest simulation of rugby stereotypes I have seen, with kicking the only way to gain ground. Without reliable passing or moves to beat defenders the best path to victory is grinding your way down the field hoping to win the field position battle with kicks or steal a ruck or line out from the AI. You’ll usually triumph over the AI thanks to a “stiff arm tackle” induced by mashing the fend button and converting a goal from the messy, behind the kicker, Mode 7 show off angle.

Default match lengths are far too long for such a tedious game but the control is tight enough that I found myself gripped by the contest, if not entertained. I can see this being a pretty decent multiplayer game if it doesn’t degenerate into button bashing, the AI manages to avoid scaling difficulty using the speed at which buttons are bashed, though the top teams will still get their fair share of the ball.

The presentation is something else. While not quite as ridiculous as its NES namesake (mercifully no games are won with paper, scissors, rock) the interstitials are hilarious, featuring a referee in a series of effeminate poses and voice samples from a Japanese man speaking English resulting in packing a “scram” instead of a scrum. Check out the screenshot gallery below for some of the more interesting moments.

Super Rugby was developed by TOSE, a mysterious Japanese developer known for rarely being credited their contributions on games. They are still going to this day and are known to have worked on such titles as Final Fantasy XIII: Lightning Returns, the SNES Dragon Ball Z games and various Resident Evil ports for handheld. Super Rugby was published by Tonkin House, a Japanese publisher that was active until 2004 but only had one title published in the west, a Playstation tennis game V-Tennis.

Unfortunately I have no chance of gauging critical reaction to Japanese rugby games, but I did find a single review of World Class Rugby from SNES magazine SuperPlay who gave it 74% and complained about the constant cuts to the scoreboard. You can read that review here.

Next time: Where did the maker of Total War get its start? Mega Drive rugby games. Give yourself a triple!