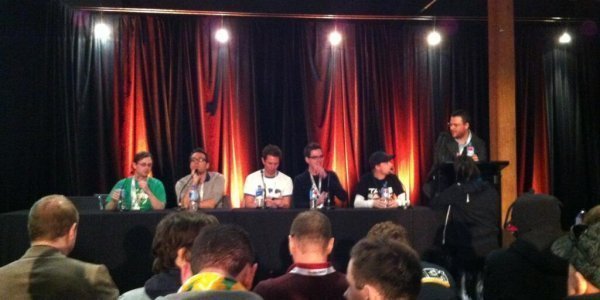 With PAX AUS in full swing, the boys of the Friendly Fire Cast are taking a bit of a break.* Don’t fret, though! In their place this week is a (kind of dodgy iPhone) recording of the “Gamer Rage – Entitlement Issues” panel that took place Saturday 20 July in the PAX AUS Wombat Theatre.

Here’s the description of the panel, straight from the PAX AUS program:

“Gamers are an entitled bunch. Over the past five years alone we’ve had petitions launched to change the ending of an epic space adventure, frenzied debate over cover art for a thought provoking, 1920’s shooter and most recently, had petitions launched to President Obama to stop sales of a certain title because consumers believe “it violates our rights to have a choice between the originals or the reboot.” Are gamers crazy? Or are they simply passionate beyond belief?

“Our panel is going to take a look at five occasions of extreme “gamer entitlement” and talk about the issue at its core. Did consumers have a right to request BioWare rewrite the entire ending of Mass Effect 3, or was that an impeachment on their artistic vision as creators?”

We’ll be back with our regular Friendly Fire Podcast format next week. Thanks for tuning in!

*By “taking a bit of a break,” we mean that the boys are neck-deep in gaming goodness. Keep it glued to MMGN and Stevivor for continued coverage.