Owlboy is one of those games that has spent long enough in the development oven that entire console generations have come and gone. After nine years in development – almost as long as next month’s Final Fantasy XV! – Otus and company are finally ready to be unleashed upon the world.

Developed by the Norway-based D-Pad Studios, Owlboy centres around the mute Otus, a young owl-man in the skybound village of Vellie. Training as a defender of the village, Otus has the power of flight thanks to his owl cape, adding the game’s most enjoyable mechanic – permanent flight. When sky pirates shake down the village, Otus and his best friend Geddy set out to protect their home before being rolled up into a far grander adventure.

At its core, Owlboy’s mechanic backbone is the ability to fly. Unlike so many games where such a skill is limited or on some form of timer, Otus can flap and zip about for as long as you like. It’s strangely freeing, not having to rush from one point to another but instead getting to enjoy your total freedom of movement. The movement controls are immediately understandable and comfortable, as they should be. While Owlboy is primarily a platformer, the ability to fly and dash indefinitely also allow it to incorporate some elements of a bullet hell game. Enemies will often throw projectiles your way, letting you feel like a boss by dodging and weaving around them. While Otus is limited to a basic bash and spin melee set, he does have the ability to carry objects with him to use as weaponry – including allies. 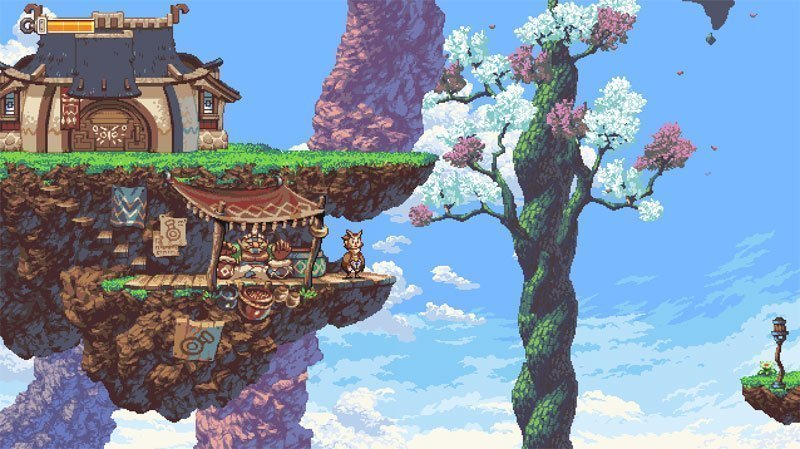 From the outset you have access to Geddy, Otus’ best friend, who has a fairly basic pop-gun you can put to work. Ove rthe course of the game you’re introduced to additional allies who add their own skills to your arsenal, such as a timed-reload shotgun blast. Toggling between your allies is made easy very soon after the game kicks off, meaning you never have to worry about choosing the wrong friend for your ‘loadout’.

Barring the aforementioned shotgun cooldown, a lot of the fun of Owlboy derives from the fact that it DOESN’T make you wait for anything. There’s no limit to your flight or dashes, no life counter to make failure scarier than it needs to be. It’s a game that rests easy on the nostalgia of the old-school without giving in to its frustrations. While you will no doubt die on occasion or mess up, Owlboy is well checkpointed enough that you never feel like you’re being punished for not playing perfectly the first time around.

Where this game truly shines though, is its presentation. Right off the bat (or owl? Too cheesy? Moving on), you are guaranteed to be impressed by the pixel art on show here. For a game that’s billed as a tribute to 2D pixel games of old, Owlboy has no reservations from shooting for a much higher level of quality than would be necessary to match the level of the games it’s dedicated to. Each area has a distinctly unique aesthetic, and while some building-block assets may be used multiple times, every area has enough unique material to truly feel separate. 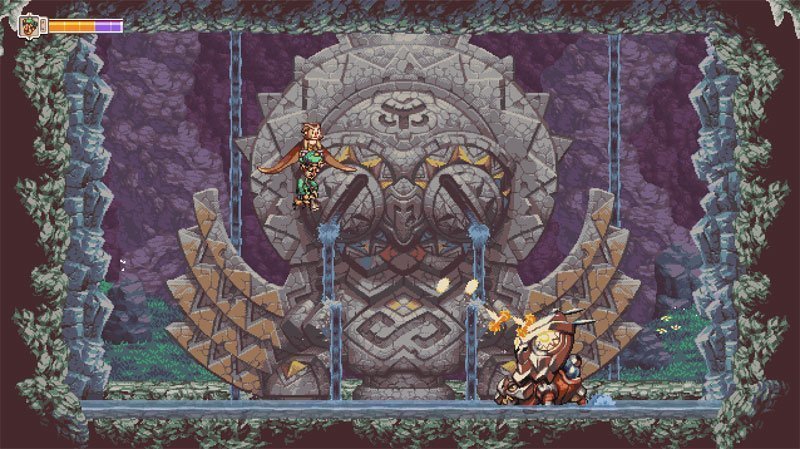 The level of detail worked into the art and style as you move through the game, even for background content you may only ever glance at once, is amazing. Character models have a great degree of expression and range, despite their relatively limited space – Otus especially makes good use of his owlish eyebrows to convey emotion, despite his lack of a speaking role. On top of this, Owlboy makes good use of cutscenes with more detailed pixel artwork. It’s used somewhat sparingly, but each one really adds to the depth of the game’s story.

Paired with a well-written story and varied soundtrack, Owlboy does something that a lot of pixel-art games don’t – it elevates the medium from the bare requirements. While some games utilise pixel art as an easy way to convey a mechanic or story with simplified visuals, D-Pad Studios have clearly chosen pixel art because that’s what they WANTED to use. It’s no wonder the game has been cooking for nine years now – anything with this much love poured into it doesn’t leave the kitchen until it’s good and ready.

Owlboy was reviewed using a promotional code on PC, as provided by the publisher. Click here to learn more about Stevivor’s scoring scale.