FlatOut 3, released in 2011, almost killed the franchise. With new owners and a new developer that didn’t understand the core of the title, all looked grim. Now, developer Kylotonn has stepped in, bringing FlatOut 4: Total Insanity closer to its glory days. Still, ragdoll physics and mediocre racing can only get you so far…

Flatout 4 lets players go crazy however they’d like, with a career racing mode on top of a number of derbies and stunts. Racing isn’t up to par with the likes of Gran Turismo, Forza or even Mario Kart, with cars that feel weightless and races that can be one or lost at the flip of a coin. Sometimes, you’ll shoot straight out ahead of the pack and easily stay there for an entire go. Other times, you’ll hit the smallest corner of an object that doesn’t break, go careening off the side of a course and spend the rest of the race trailing, not even seeing another car. Either way, it’s boring.

Everything about career mode is very bland, from uninspired race tracks to prizes; unlockables are so meagre, you’re better off upgrading your own car rather than buying another. Themed-modes like beat-the-bomb do break up the monotony a bit, requiring you to race as fast and as efficiently as you can from checkpoint to checkpoint, but I found myself longing to head to FlatOut 4‘s other main mode — the titular FlatOut — to actually have fun. 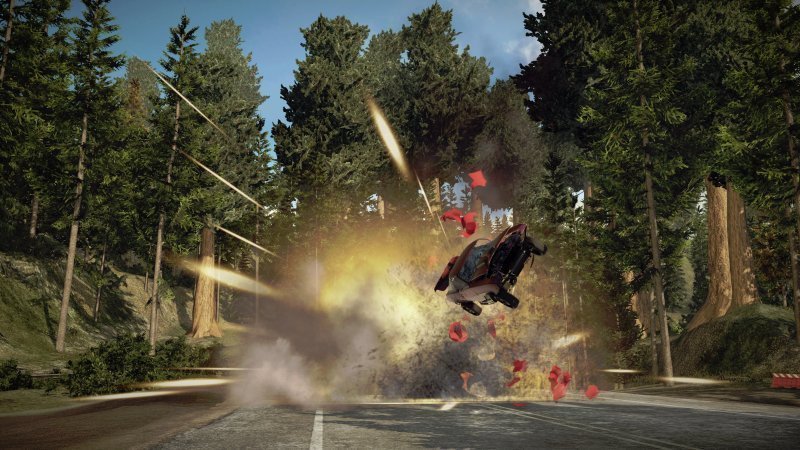 Easily the best part of the game, stunts require you to eject your car’s driver and have him sail through the air to meet a specific purpose. Sometimes, it’s simply to hit an exploding barrel and demolish a stage. Others, it’s to serve as a human ping pong ball in a giant-sized version of beer pong. For Canadians, the curling stunt mini-game will be all you’re talking aboot. There’s also golf and pool, ’cause why not?

While the stunts will take a bit of getting used to — I didn’t understand how to launch my driver initially, and then failed at long jump because I didn’t realise you needed to drive your car down the track first — they’re very morish. With leaderboard support, you’ve the option to challenge your friend’s scores online, but I bet most will elect to pass around a controller on the couch. You’ll also have to continue besting yourself to unlock more stunts to try.

Despite rewarding gameplay, things can go buggy as all hell; I’ve lost count of the amount of times my beer pong driver somehow managed to wedge himself in the side of a red plastic cup. This can lead to some hilarious moments, but also end up quite frustrating. The Finnish Pins stunt requires you to hit pins and score exactly 25 points; that’s difficult enough to do normally, but even more so when things bug out. 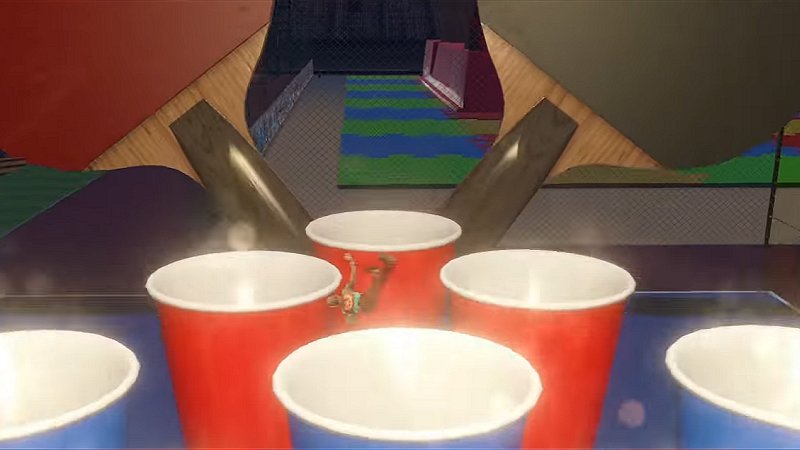 Derbies and other arena events fall somewhere in the middle of proceedings — they’re not as fun as stunts, but are far more enjoyable than races. Weightless cars again are the cause, devolving matches to the point where you’ll end up racing to the side of the circuit and launching your car as fast as you can back towards the middle, crossing your fingers and hoping for the best. Power-ups help to keep your car alive, or provide more damage, but they’re hard to hit. Again, just the smallest bump and you’ll go flying at a trajectory you didn’t believe possible.

All up, FlatOut 4: Total Insanity is quite an improvement over the last game in the franchise. This is a competent car game, not excelling at anything but merely holding its own. You can get better racers or derbies out of a handful of other games, but its stunts are unique and enjoyable. They alone are worth a purchase if you’re in amongst a group of rev heads with nothing to do on a Friday night.

FlatOut 4: Total Insanity was reviewed using a promotional code on PS4, as provided by the publisher. Click here to learn more about Stevivor’s scoring scale.