I never expected to enjoy Etrian Odyssey Untold: The Millennium Girl as usually, JRPGs just aren’t for me. I neither have the time nor patience to wade through their 50+ hour campaigns, endless menus and, more often than not, mediocre stories. But an odd thing happened when I played The Millennium Girl: I had a lot of fun.

That’s not to say the classic JRPG foibles aren’t present and accounted for — cause they certainly are — it’s more to the point that the actual playing of the game was good enough to cause me to forget about the parts I didn’t care for. I’m not denying that it’s an odd way to play and enjoy a game, but in The Millennium Girl, the whole isn’t equal to the sum of its parts. You could easily play this game taking note of as much or as little of the extraneous activities as you like and still come away with a positive experience. 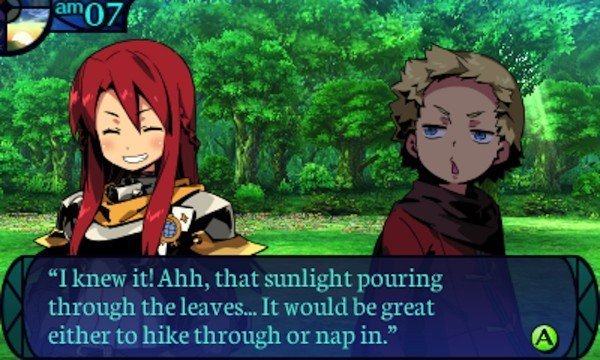 The Millenium Girl is at its most basic a first person, dungeon crawling RPG. Classic turn-based fighting breaks up dungeon exploration with both random encounters and visible enemies trying to eat you. While exploring the dungeons the top screen of the 3DS shows the first person perspective while the touchscreen contains the map. Only, there’s no map at first. Part of the fun of being an explorer is mapping your surroundings, so by using a combination of lines and icons you’re also required to map each floor of the dungeon.

Initially I was worried this would become tedious, but surprisingly it’s one of the most addictive and fun qualities of the game. It also serves an important function in that located within the dungeon are special areas such as a soldier who will completely restore your party, shortcuts between corridors, mining spots and more. By noting these down on your map you’ll have easy reference later when you need it.

Once an entire floor has been mapped you’ll unlock ‘floor jump’, which is basically fast travel. Instead of having to walk all the way back to the stairs up or down to the previous floor you can simply tap the icon and be transported there instantly. I made frequent use of the feature once I unlocked it due to the need to heal my party and rest. You can only survive in the dungeons for as long as your supplies hold out, so you’ll need to keep a watchful eye on things. Try and stay in the dungeon too long and you’ll likely hit a game over screen when you run out of healing items and magic.

It’s quite the delicate balancing act and when you’re down to your last two party members with very little health, no floor jump ability and a very, very long walk back to the stairs. Your nerves — like mine — will be shot at that point. When you do make it back in one piece, it’s all the more satisfying. 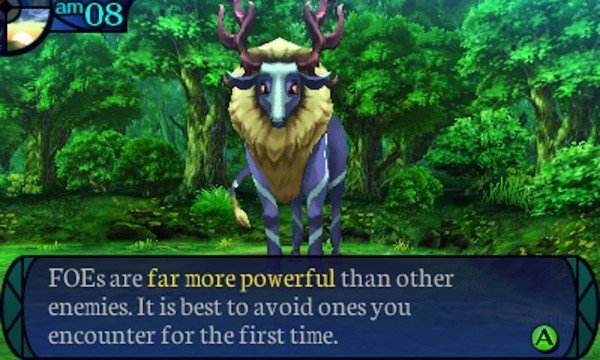 As mentioned, battles are typical JRPG turn-based fare. For the duration of the game, you’ll be mostly controlling the same party of five characters. Each fits into typical RPG archetypes: tank, magic, healer, assault and ranged attack. Each character’s class can be changed, but it’s really unnecessary so I never tinkered with it much. The default classes and abilities are well balanced enough that all you’ll really need do is upgrade stats and abilities as you level up.

The more meaningful changes to character’s stats comes from equipping new and better equipment. As you explore each dungeon and defeat enemies you’ll accumulate dropped loot. Once back in the central hub area, your loot can be sold to the local merchant who’ll pay you and craft new weapons, armour and items. The more you explore, the better your equipment can be. It’s a tasty gameplay loop that had me eagerly heading back into the dungeons just to see what I’d unlock next.

To defeat the game’s more difficult enemies — dubbed FOEs — you’ll need to be at your best and be carrying the best equipment. FOEs are incredibly tough with the game even actively warning you against battling some of them until you’re a higher level. FOEs, unlike standard enemies, aren’t random encounters and appear on the map screen. The usually move in a predictable pattern and can be avoided if you can work out their next move.  Beating one yields some serious rewards though. It’s classic risk versus reward, which sums up The Millennium Girl overall. 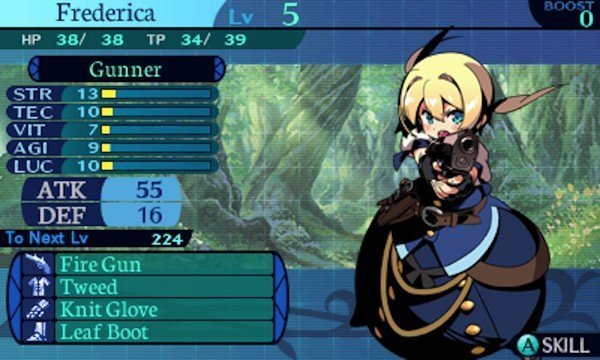 Outside of dungeons is the hub town that includes a variety of locations that offer various services like an inn for resting, a shop, a pub for acquiring side-quests, a guild hall for main missions and so on. When not exploring a dungeon, the game becomes quite menu and text heavy. It does grow tiresome after a while, especially if you’re not invested in the rather weak story. I found myself hastily skipping most dialogue as a lot of it was unnecessary. I followed the major plot points through the criminally limited number of anime style cutscenes. Seriously, these animated sequences are a highlight and rivalled only by Professor Layton on 3DS.

If you’ve no interest in the story, then you can play the game in classic mode which does away with much of the narrative and lets you get down to the nitty gritty of exploring, mapping and battling. Story mode seems designed to usher in new fans who may be overwhelmed by the hard JRPG nature of The Millennium Girl, but it really doesn’t add much value. Either way, the gameplay remains identical, and that’s the best part anyway.

The 3DS has been inundated with amazing games in the last 12 months and while I wouldn’t go so far as to put Etrian Odyssey Untold: The Millennium Girl in that same tier, it’s certainly a solid experience worth playing for JRPG fans. Heck, JRPG fans won’t even need my recommendation; they’ll already have bought it and been playing it for more hours then I can comprehend by the time this review is published. If you’re not a fan of lots and lots of text and JRPGs then this really isn’t for you, but if you’re curious there is a demo on the eShop that lets you export your save data to the full game. Check it out and find yourself having a surprisingly good time like me.