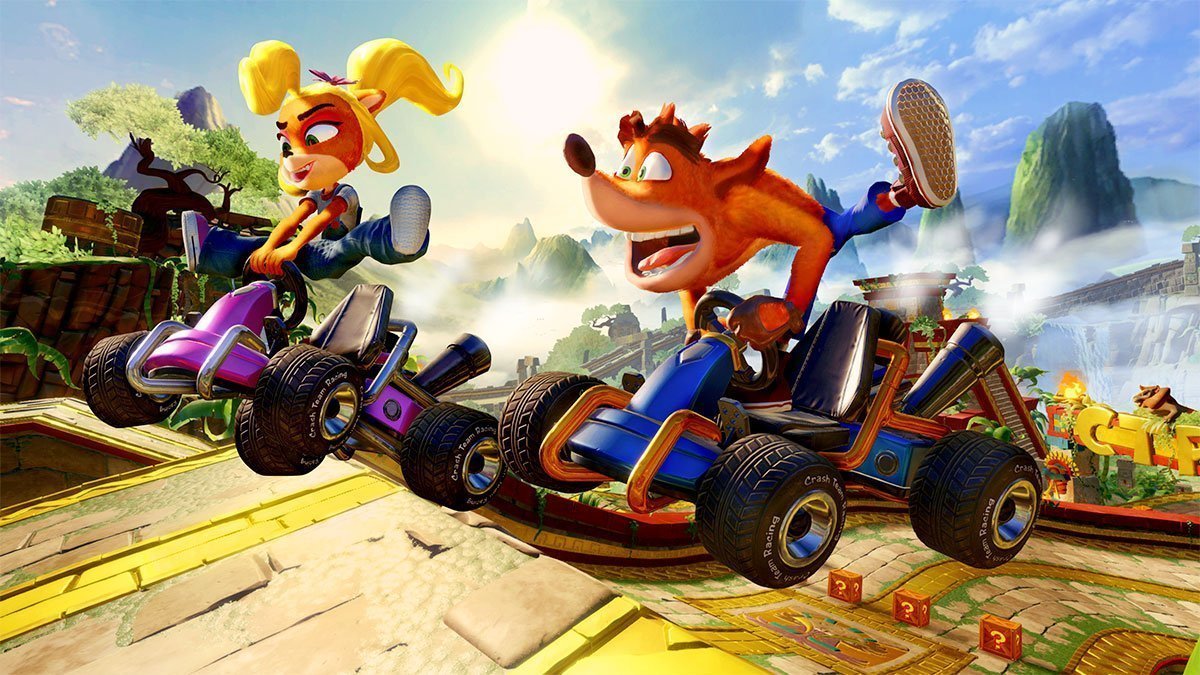 Crash Team Racing Nitro-Fueled Review: Off to the races

Put the paw to the pedal (to the metal).

Activision is once again banking on nostalgia, this time remastering Naughty Dog’s Crash Team Racing as Nitro-Fueled. Featuring modern day character designs, fancy graphics and content from Crash Nitro Kart, does this new release match the original, which was first let loose upon the world way back in 1999?

Straight up: I don’t have the answer to that question. I’ve never played the PSone original… unless you count the five minutes at Bartonica the other week after downing a couple pints with Ben. What I do know, however, is that I really enjoy this one.

If you’ve played a kart racer before, you’ve a fairly decent grasp of Crash Team Racing right off the starting line. Crash and his pals have ditched side-scrolling adventures for laps around a series of Crash-themed tracks, fueled by wumpa fruit (which add kart speed and power-up effectiveness) and aided by crates which either offer said fruit or one of a number of power-up items including giant rolling bombs, rockets, insta-turbos, TNT boxes and more.

Perhaps the biggest difference between this and similar kart games is that there’s a three-tied turbo system at play. Pressing and holding one bumper button at the start of a turn will put your kart into a fully sick drift; pressing the other bumper button at the peak of a turbo meter will provide your vehicle some added boost. If you can hold the original bumper button down and continue your drift, you’re actually able to chain three together with consecutive, timed presses of the second bumper. I swear it’s less confusing when you’re actually driving.

Moreover, a press of the bumper button will cause your kart to hop; time this with a ramp and you’ll gain extra turbo power once you land for every moment your kart was in the air. Chaning together drifting and jumps can build up quite a lot of extra speed; it’s exhilerating, to say the least. There’s only one small downside to the system at the moment, in that at least two drifting Achievements (Drifter and Master Drifter) don’t appear to be tracking on Xbox One. Hopefully, the ability to earn both is corrected soon.

You’ll need to excel at drifting to compete in the ultra-challenging Adventure single-player mode. This is a straight up story mode that pits Crash (in Classic mode) or any of his friends and foes (in Nitro-Fueled mode) against the villainous Nitrous Oxide, an alien being who plans to best Earth’s racers and transform the planet into his own personal race track.

In general, there are four tracks in each of Adventure’s hubs, requiring your character to place first in each before taking on a Boss and moving on. Once you clear a level you’re also able to take on additional modes — one tasks you to place first while collecting the letters C, T and R, another has you collecting gems under a time limit and the final one asks you to race around a track collecting crates in order to shave seconds off your overall time. There’s also a smattering of local and online multiplayer offerings outside of Adventure which let you play some of these modes on their own in addition to events like Cups and a variety of battle modes.

Difficulty-wise, Crash Team Racing Nitro-Fueled is inbalanced and rather annoying. The Classic mode available in Adventure is locked at a single difficulty, while the Nitro-Fueled equivalent has multiple tiers to select from. The original difficulty seems fairly equivalent to the modern day Medium setting, and it’s genuinely challenging. Said difficulty offers a great feeling of satisfaction when you’re finally able to place first on a track that’s been giving you some issues — it took me about four or time times to do so on each track.

The trouble is, Medium doesn’t demand skill so much as it simply stacks things against the player. Even when racing perfectly, keeping to tight lines and activating boosts like a pro, the entire racing roster is fixated on you; you’ll notice those in third and fourth target you as the second-placed player, absolutely ignoring the character in first. When leading, everyone doubles down against you; I’ve raced many a track where I’ve been frustratingly hit by three rockets and a bomb right before the finish line. You might be able to counter some of those shots with a power-up you’ve been saving, but not all of them. As for Easy difficulty? Well, it’s so overly easy that you’ll absolutely destroy your competition and lose all sense of fun doing so.

Having to retry tracks when playing on Medium difficulty would be less of an issue if Nitro-Fueled didn’t suffer from horrendous loading times. Worse yet, winning a race and transitioning to the podium presentation seems to be the longest wait of all. At the very least, you’ll earn Coins for each race; they’re used to buy kart and character customisation items.

Despite missing the mark on a difficulty that feels consistently challenging yet fun at the same time, Crash Team Racing Nitro-Fueled is an utter delight. Its single-player Adventure mode is sure to provide hours of fun for karting fans and I can’t wait to be able to try out local and online multiplayer — properly — when the game hits stores and gets into more players’ hands. I’ll be playing as Crunch Bandicoot, equipped with some sweet skins that I’ve bought with all my failed Medium difficulty mode attempts.

Crash Team Racing Nitro-Fueled is available now on Xbox One, PS4 and Switch.

Crash Team Racing Nitro-Fueled was reviewed using a promotional code on Xbox One X, as provided by the publisher. Click here to learn more about Stevivor’s scoring scale.