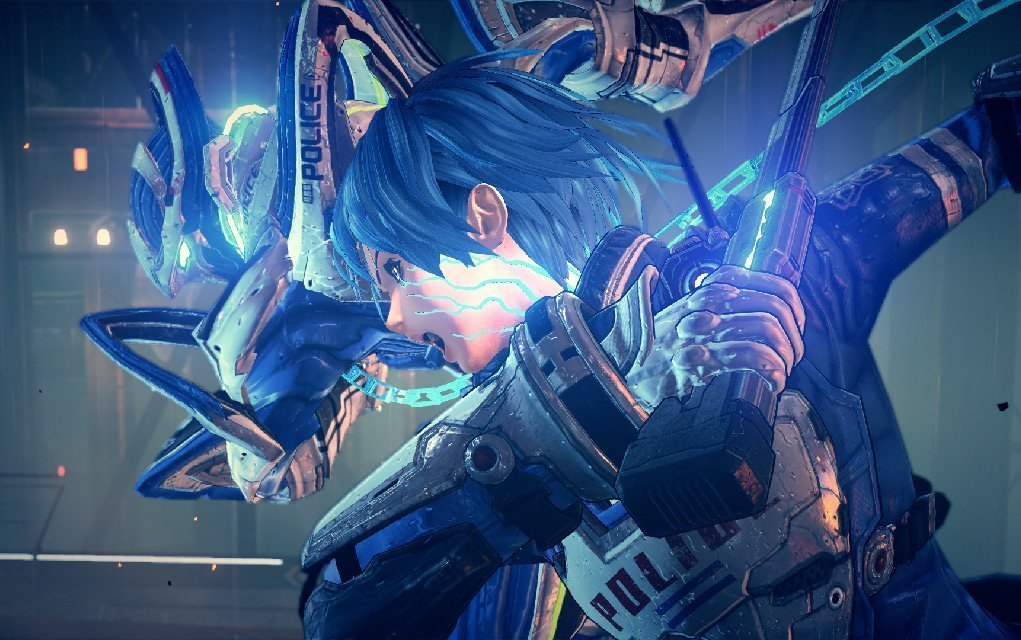 The latest love child of PlatinumGames, proud parents of Bayonetta, Metal Gear Rising: Revengeance and NieR: Automata, Astral Chain brings us another exciting blend of stylish visuals and a tight set of mechanics. Sometimes you just want to play a game that’s anime as hell, and Astral Chain is that game.

Set in 2078 against the backdrop of a near-extinct humanity, you’re dropped into the Ark, humanity’s last bastion on a manmade island. With the world fearing the incursions of other-dimensional enemies called Chimera, the police’s Neuron task force is all that stands in their way. As a member of Neuron, you are tasked with commanding a Legion — a Chimera forced to do your bidding by way of a leash-like technology called the Astral Chain. Now, if the volume of specially-coined terms and names necessary for you to memorise in order to be able to follow the story seems like watching any anime to you? Good news, the rest of the game is like that too.

Don’t take this as a bad thing — an anime structure fits well for this game. You have your initial burst of action for a flashy intro, an introduction to the core cast, and then a major story moment to outline your overarching goals — the obtaining of a handful of MacGuffins before you’re ready for the endgame. It’s clean, it’s classic, and it provides a clear timeline for knowing that you’re making progress in the game. Not to mention, a flashy anime-style intro sequence that is very fun but sadly, is video rather than live-rendered — meaning it does not feature the customised player character you created less than an hour beforehand.

In the style of many contemporary Japanese titles, it provides you with a purely cosmetic selection of character customisations. Choosing from either a male or female character between a set of twin siblings who have just joined the police force, you can assign their hairstyle and skin/eye/hair colours, and provide a name — as they’ll be exclusively referred to as “hey you” and “the Legionis” throughout the game’s spoken dialogue. It’s a small touch, but does allow you to feel some level of investment with your character from the start. While I did appreciate that your twin somewhat mirrors your customisation choices – after choosing a darker skin tone for my character, his sister’s skin changed to match, rather than retaining the milk-white default option – it would have been nice if her eye and hair colours had adjusted too. They are twin siblings, after all. Nevertheless, even if it’s just these minor details, it’s nice to have some control in such a structured narrative.

Gameplay is broken up into two distinct sections: investigation and combat. In most missions, you’ll start off by walking the streets of an area — investigating clues, interviewing civilians, and exploring side missions that regularly have nowhere near as much importance as the task at hand. Sure, a giant spectral hand is kidnapping people at random, but that one kid has lost his soccer ball! Completing these side tasks does give a boost to your police ranking — the game’s level-up system — so any competent officer would be well-served to drop his investigation without a thought to find a lost puppy, or complete a logic puzzle presented by a squad of children.

The investigation sections are surprisingly involved and enjoyable, given they lie outside of PlatinumGames’ home turf of action gameplay. Exploring areas to interact with the various clues and tidbits laid out for you is great — while some clues will be pertinent to your investigation, others are dropped in as red herrings to catch you out for not paying attention. When hunting down a suspicious individual, knowing about the hot new ice cream store on the block isn’t so important. Each investigation section ends with one fo your fellow Neuron officers quizzing you to fill in the blanks on the known information, with experience bonuses given if you can pull it off without a single wrong answer.

For the most part this is easy, but occasionally the logic employed is a little skewed; in one early investigation, I’d heard reports of ghostly tentacles and a floating set of armour at the same location. When asked to describe the “strange presence” people had seen there, I opened with the armour — it was the first I’d heard of, and two NPCs had provided the same clue. This was knocked back as incorrect, saying the tentacles were the right answer… and then the followup question was: “but what else have people seen there?” While it may be an issue with the nuances of translation from the original Japanese, it does seem a little cheap to lose a perfect score over something so simple.

The other half of the gameplay revolves around PlatinumGames’ bread and butter: combat. Astral Chain truly shines here, as we all knew it would, with a complex control scheme that nevertheless becomes familiar quickly. The core of the system revolves around what the team referred to as ‘synergetic combat’ — in a fight, you not only control your officer, but also their summonable Legion partner. While the Legion can typically fight on its own, attacking enemies in its vicinity, you’re also able to take direct control of them in multiple ways. You can use your Astral Chain to pull them around the battlefield, directing them to particular enemies, as well as using the chain itself for multiple traversal and combat functions.

By guiding your Legion to circle around an enemy you can temporarily wrap them in the Chain to subdue them, or spread the chain across the path of a charge attack to catch the enemy and fling them back to stun them temporarily. These, combined with specific combat abilities for each Legion unlock a whole range of approaches to fights that over time, will see you flicking back and forth to different Legions and abilities without a second thought.

While Astral Chain‘s storyline is filled with anime archetypes and familiar plot tropes, it all works well as an overall experience. I actually found myself more and more engaged in the plight of my silent protagonist and his much more vocal twin — though, if you can only choose one twin and the other’s going to speak anyway, why is he silent when played — as they dove deeper into the mysteries of the Chimera and the Astral Plain. I look forward to reaching my ultimate sparkle destiny as my twin inevitably becomes the ultimate Neuron officer and fixes the whole world’s problems.

Astral Chain was reviewed using a promotional code on Switch, as provided by the publisher. Click here to learn more about Stevivor’s scoring scale.