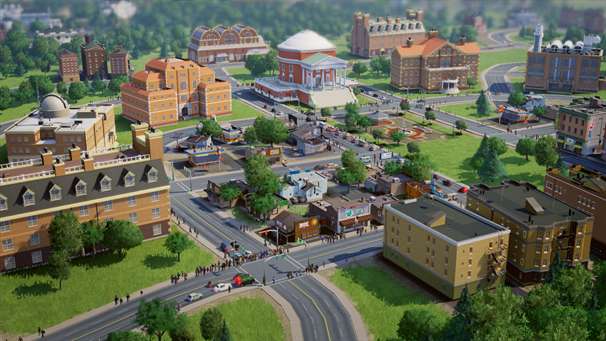 While the EA booth at E3 gave us a chance to look at many different games, none were as positive as Maxis’ refresh of SimCity.

We’re talking positive in terms of the game itself, the people previewing it AND the developers presenting it.

Using its new Glassbox simulation engine, SimCity looks gorgeous. The town loooks like a little model city, as if someone’s sat and hand-crafted and hand-painted each individual home, tree, car and person. The detail is intricate and you can tell that Maxis are treating this game as if it was their first-born child.

Each individual component of the game is simulated; if you spot one human walking along the street, you’ll be able to follow that person to their job, their home, watch as they go out at night for entertainment, and so on. The game has been designed with everything made to be as visual as possible; you’ll see how power’s been distributed at the click of a button, and when things are going bad in your burrow you’ll get visual clues like graffiti in a crime-affected area of town.

Placing anything looks and sounds cool – we watched as a powerless area was restored to normal by placing some power lines down. Everything placed into your city lands on the grid with a real sense of weight, and houses bounce when they first touchdown. It’s adorable. With things like a coal production facility, additional components of the building can also be amended and modified so it feels like a unique structure and produces differing resources.

Multiplayer works very well. We watched a multiplayer game of four different people; three players worked together, and one seemed to when it suited her. The odd one out focused on energy production, and as such was polluting her city…and eventually would be polluting those cities around her. The energy baron was selling off her extra resources to rake in cash, and because she wasn’t spending money on law enforcement, we saw as criminals drove from her town to another player’s. Luckily, that player had a stellar police service and the attempted bank robbery was thwarted. Basically, you can play the the multiplayer however you’d like, and there appears to be a way to counter the affects of nearby towns.

The cluster of cities also banded together to build what Maxis called a “Great work” — in this case, an international airport. The work was a boom for every town for many different reasons; the newbie player would benefit with increased traffic and resources without a ton of effort, the energy baron benefited from another means to transport her coal, and so on.

In short, SimCity as you know and love it is back. Well…almost; look for it on PC sometime in February 2013.