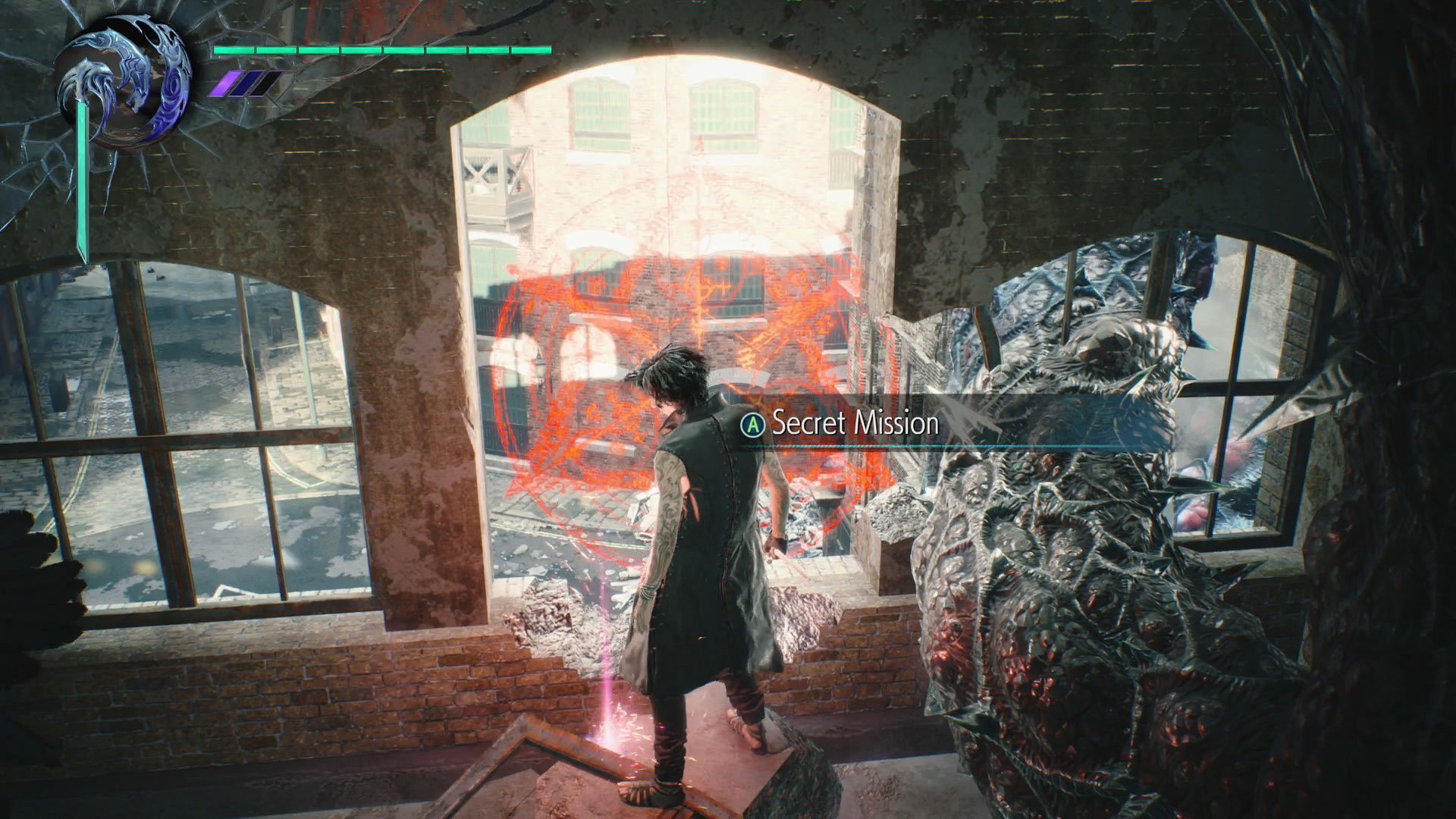 Devil May Cry 5 is available now, and like other entries in the franchise, hides a number of secret missions in the middle of normal gameplay. This guide is all about unlocking all of the game’s secret missions.

This is found in Mission 02. It’s practically a gimmie, found in the hotel/castle after a moment where tentacles crash through a hallway. You’ll find the area alongside a tutorial that explains how to access it.

The secret mission? Defeat all enemies.

Available inside Mission 03. You’ll get to a stairwell that will show a brief cutscene of a hole in the wall. Don’t go through that hole; instead, head to the bottom of the stairwell and align the markings.

This one’s in Mission 04. You’ll need two Niddhogg Hatchlings to get to this one, just off the main mission path. Get the first, obvious Hatchling and then summon Nightmare near a building that looks to have a woman holding a red skull. He’ll break through the wall so you can get the second Hatchling. With them both in tow, continue through the level; after using one Hatchling to get to an area with a Blue Orb, you’ll be able to use the second Hatchling get to and up a stairwell.

The secret mission? Collect all of the Red Orbs.

This one is found in Mission 05. After fighting a group of enemies in the warehouse, look forwards a container on the left side of the wall. If you summon Nightmare in the right place, your Golem will break through a wall and provide access to align the etchings.

The secret mission? Eliminate all of the demons without taking a hit.

This one is found in Mission 08. As you’re moving up a tongue elevator, jump off to the right and use the nearby grapple points to get up to a secret area.

The secret mission? Get to the goal without touching the ground.

This one’s in Mission 09. When outside and after the first Knight-like enemy, look to some vines on the left. If you (again) summon Nightmare, you’ll break through the vines and you can get to a Blue Orb and the secret mission.

This secret mission? Eliminate all of the demons in 20 seconds or less.

You’ll access this in Mission 10. When you’re in the room with two red, teeth-filled doors, one will contain a Gold Orb; the other, this secret mission.

The secret mission? Aim for their weak point and take them down with a single bullet.

This one’s found in Mission 11. You’ll reach a building with three blood clots to destroy; after the first, a cutscene will show a clocktower. When this happens, backtrack and head back to the top floor, looking back at the ruins to activate the mission.

This mission is in Mission 12. As you work your way up a tunnel, you’ll notice etchings on the walls. You’ll need to turn around and look for a platform to align them all; the Trickster fight style is needed to get up there. While jumping, hit B to boost over.

Just a note here: for some reason, this one was difficult to align and actually get the prompt to trigger the secret mission. Hopefully you don’t have the same issue!

The secret mission? Stay in the air for more than 15 seconds.

This one is in Mission 14. After V reunites with his three familiars, you’ll get to an area where you’ll need to destroy bloodclots. After the second one, turn around and look for the access point.

This secret mission? Get to the goal without touching the ground.

This one can be anywhere between Mission 15. Once you get to the Divinity Statue, go around it; you’ll be treated to a cutscene that shows a Blue Orb. Equip a Punch Line and hold B to ride your arm/skateboard up the ramps ahead of you. The secret mission access point is on a cliff just underneath the Blue Orb itself.

The secret mission? Head straight for the goal!

This is in Mission 16. After dropping through the third of many holes (don’t go for the Blue Orb between the second and third hole), finish off the enemies that spawn. Proceed down the next hole, but look out for a crumbling platform with a Red Orb tree on it. Head through the hole in the wall you can access from it. Look below for another Red Orb tree; land on a ledge ABOVE that and head towards the back to activate the secret mission.

This secret mission? Collect a set amount of Red Orbs.

Devil May Cry 5 is available now on Windows PC, Xbox One and PS4.