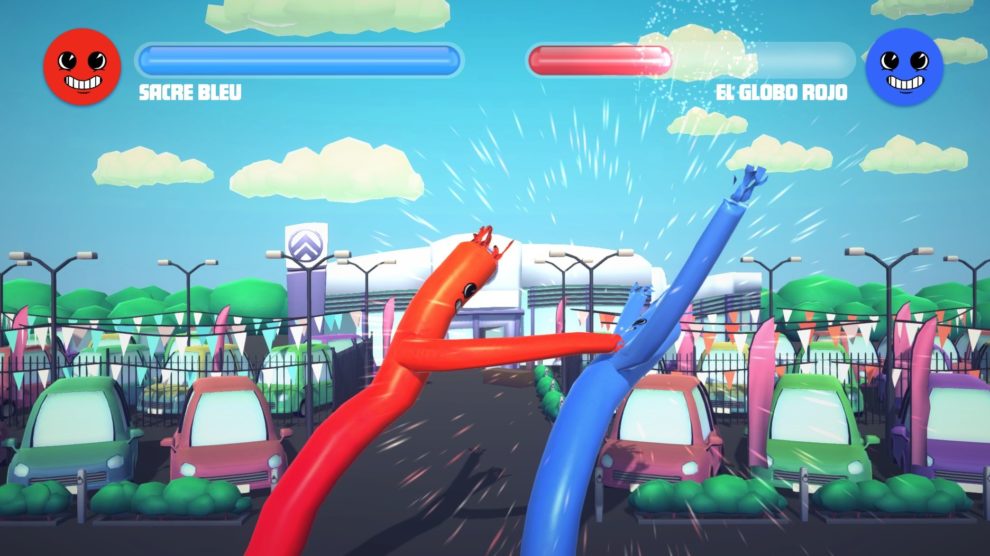 You don’t need to spend much time with Australian independent developers to see how close-knit a community they have. From IGDA-organised catchups in Sydney and Canberra to The Arcade collaborative development space in Melbourne, Australian developers are working together to make better games and aren’t seeing each other as competition but contemporaries. Perhaps this collaborative environment is what drives so many Australian indies to create local multiplayer games.

The PAX Australia show floor was full of weird and wonderful competitive and cooperative games designed to stretch the friendships you have and create new ones with whomever picks up a controller at the demo station. PAX is the perfect environment for these games to shine, plenty of willing players, easy access to four controllers and some booths even had a couch or chairs to provide weary legs some much needed rest while you dueled fireball hurling werewolves or gelatinous blobs with enough firepower to take down Outer Heaven.

Those fireball hurling werewolves call their home Lupinball (pictured below), part of the 2015 PAX Indie Showcase and a great example of the power of simplicity in multiplayer games. Best described as werewolf dodgeball, developer Michael Ventnor has focused on getting core mechanics right and avoiding adding complexity for its own sake, resulting in an easily grasped concept that adds depth and variety through unique stages such as a foosball table, inside a music box and of course, an ice stage. 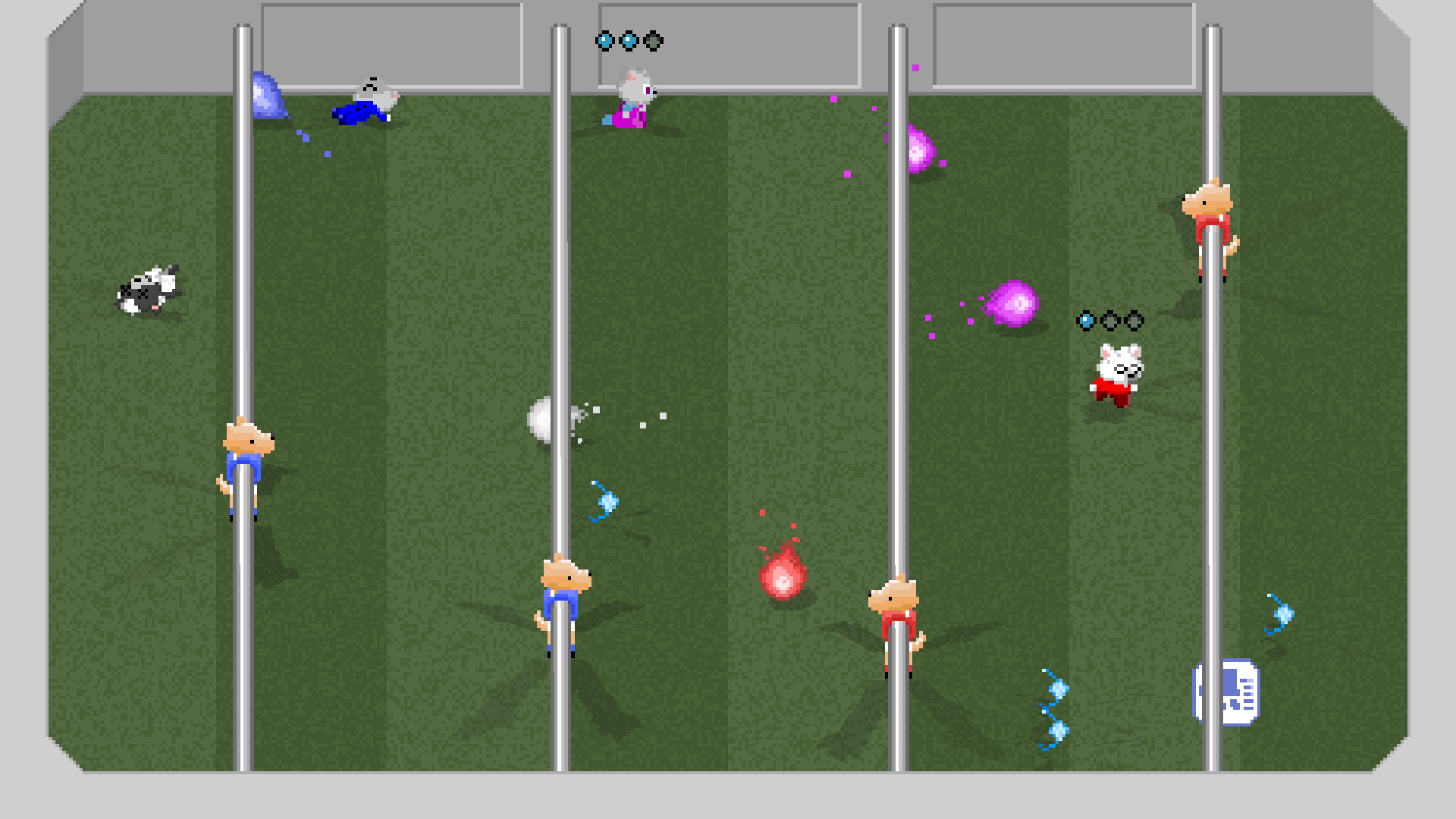 Lupinball is frantic yet strategic, taking only a few rounds to get comfortable with and never descending into outright chaos. Lupinball features some player friendly design decisions such as highlighting player knockouts in slow motion, giving everybody else a second to gather themselves in a game otherwise played at a hectic pace. I can’t wait to play more. Lupinball currently has a Steam Greenlight campaign.

The other multiplayer game of the PAX Indie Showcase was SMG Studio’s Death Squared (pictured below), a quasi-cooperative puzzle game about moving blocks and avoiding lasers. Starting as a Global Game Jam project earlier this year, Death Squared has evolved into a friendship testing puzzler. Some traps move in time with one player and others can only be blocked by characters matching that traps colour, making Death Squared a masterpiece of choreography at its best and ‘swing your controller at your friends’ frustrating when it all goes wrong and your bastard mates kill you for the umpteenth time.

SMG Studios has several hits under their belt on mobile with OTTTD, One More Line and One More Dash; Death Squared is their first venture onto console (but also coming to PC). With single and multiplayer content and plans for level creation tools, Death Squared perhaps has the most potential of any game in this selection.

Eye-catching multiplayer games weren’t limited to the PAX Indie Showcase. Inflatality (pictured at the top of this post) is the perfect show floor game, the ridiculous, hilarious concept of fighting inflatable wavy tube men made for an enticing spectator experience that held up with controller in hand. You always feel in just enough control of your character, at the mercy of the wind but able to flail your arms into coherent swings.

The erratic nature of tube men creates situations where you have your opponent tangled up and are desperately trying to swing punches into their exposed body; fights usually create laugh out loud moments. A collaboration between Sydney based Hojo Studio, Deepforge Studio and Yosha Noesjirwan, plans for Inflatality include more special moves and amusing arenas to go along with the traditional car yard seen in the PAX demo (the bogan wedding sounds particularly inspired).We’ll see if Inflatality can hold up beyond a novelty but for now it is one very funny, entertaining novelty.

Kieru (pictured below) was equally eye-catching with its stylish black and white contrast that is more than just for looks. Kieru is a first person team deathmatch game featuring two teams of black or white ninjas, each of which is invisible within their own colour on the monochrome maps. Only flashes of movement and stray splashes of blood give you any hint as to your opponent’s location, though the speed at which the game moves makes ambushes far from a sure thing. 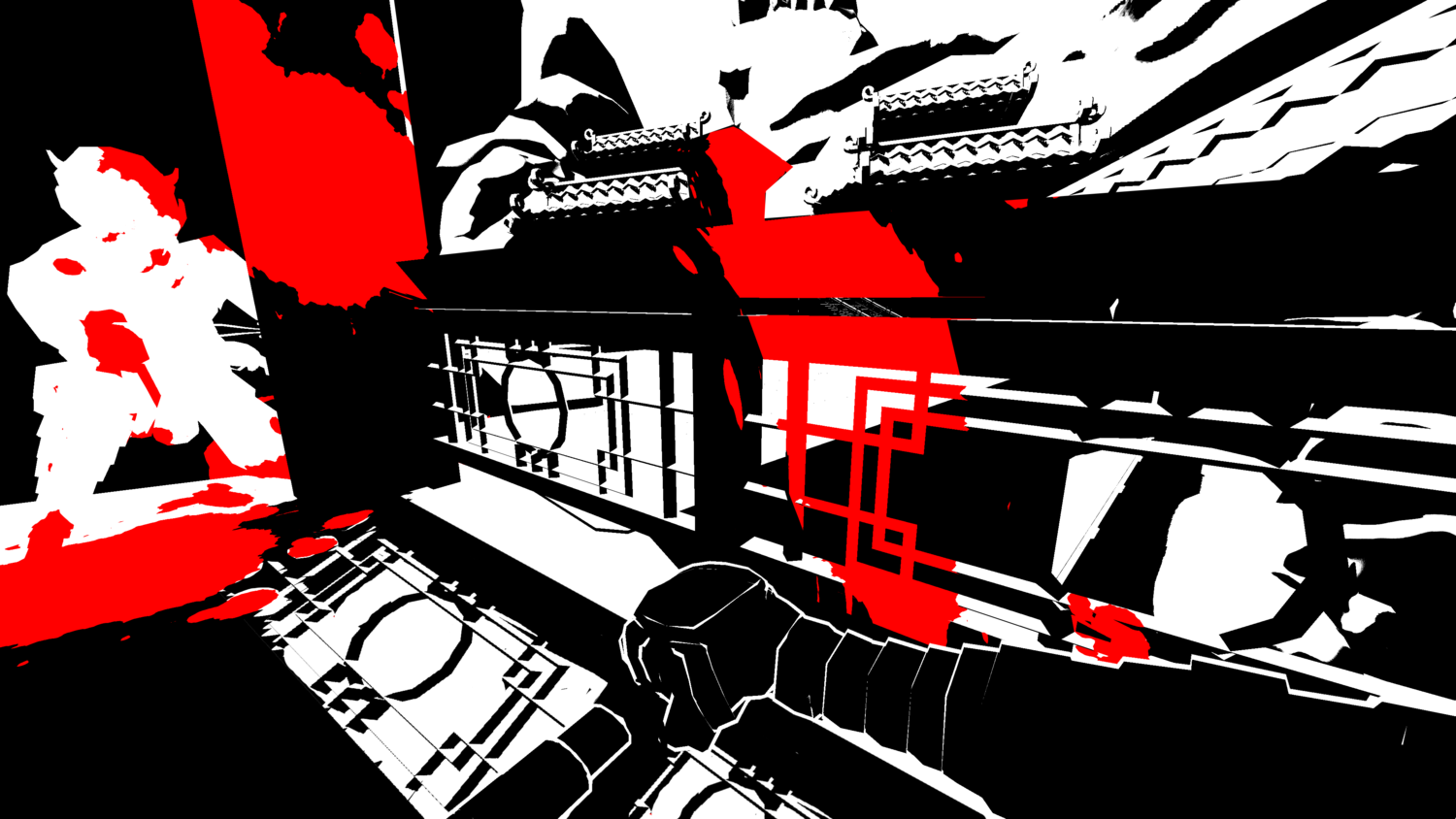 Developed by Canberra based Pine Fire Studios, Kieru has made it through Steam Greenlight and is expected to release next year. The build at PAX was early but the concept is promising, the level design made good use of height and obstacles as well as the colour mechanics. It will be interesting to see if and how Pine Fire add more mechanics to the solid combat foundation they have built.

Party Golf may as well be developed specifically for my tastes. Best described as multiplayer Desert Golfing, the simple concept of horizontal 2D golfing is easily turned into a fun, chaotic multiplayer experience when you add collision physics, power-ups and the ability to turn your golf ball into a brick. Customisation is the name of the game here, with a huge number of different modes and modifiers available to create a unique experience. Having just made it through a Kickstarter campaign we’ll get to see the finished product in 2016, with a limited free prototype already available.

Another impressive game from the show floor that can loosely be called Australian is Armed and Gelatinous (pictured below). Designed at the 2013 48 Hour Game Making Challenge at the Queensland University of Technology (using the inspiration terms of growth, arms and sticky), member of that game jam team Rob Howland and his San Francisco based Three Flip Studios has expanded the idea into a full game for PC and consoles. A frantic, competitive, single screen bullet hell shooter, rounds of Armed and Gelatinous seamlessly morph from hunting and gathering to a ‘juggernaut’ style quest to take down the dominant player and pilfer their arsenal to become them. 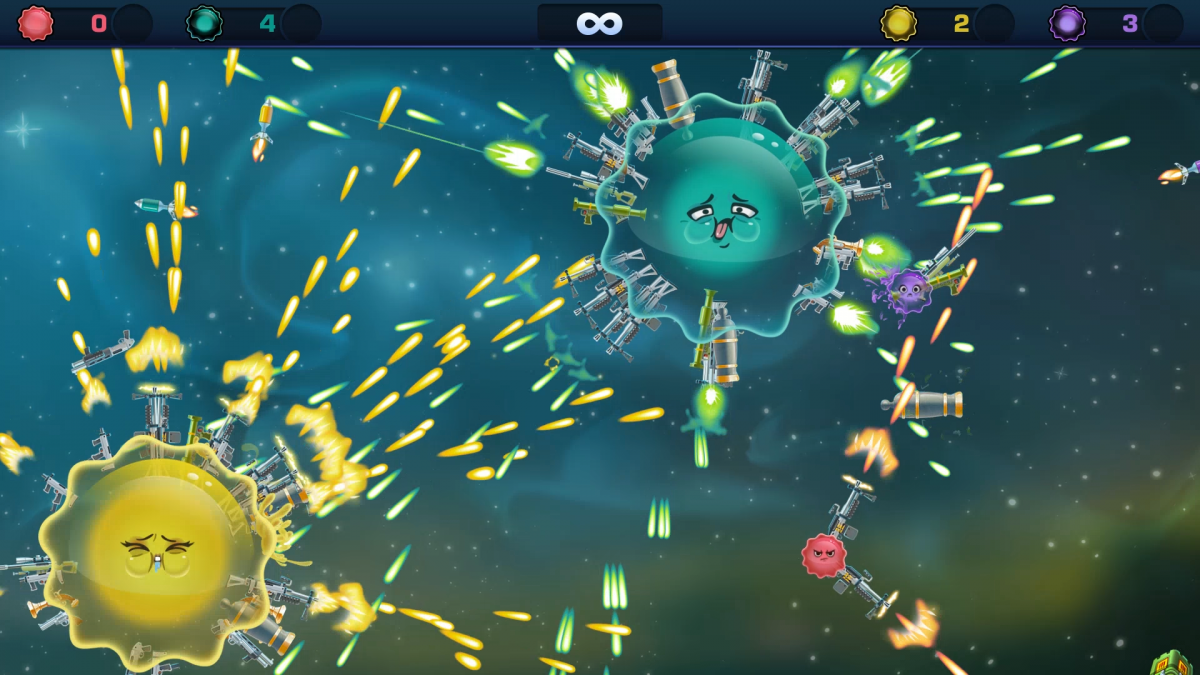 Armed and Gelatinous is a riot, a game I couldn’t put down. Despite an unsuccessful Kickstarter earlier this year it has successfully been Greenlit on Steam and will be coming to PC in January with a PS4 and Xbox One release mid 2016. A Wii U version is planned should Nintendo resolve its Unity compatibility issues.

Some titles familiar to PAX veterans also graced the floor of PAX Rising. Returning from last years PAX Indie Showcase were Assault Android Cactus (pictured below) and Screencheat, and you could hardly miss Dungeon League with no less than three setups across various booths. All three were pushing new console versions; Assault Android Cactus and its cooperative twin-stick shooting mayhem is an obvious fit on consoles. After a PC release back in September is out for PS4 in February, it looks fantastic and plays great.

Screencheat, the Goldeneye cheater simulator where you can only find your opponent by looking at their screen, will soon head to Xbox One and PS4. It is a wonderfully innovative take on split screen deathmatch and a good competitive game in its own right. Dungeon League was highlighted as an [email protected] title coming to Xbox One and currently on Steam Early Access. The competitive dungeon crawler is still a lot of fun and infinitely more polished than its 2014 appearance. 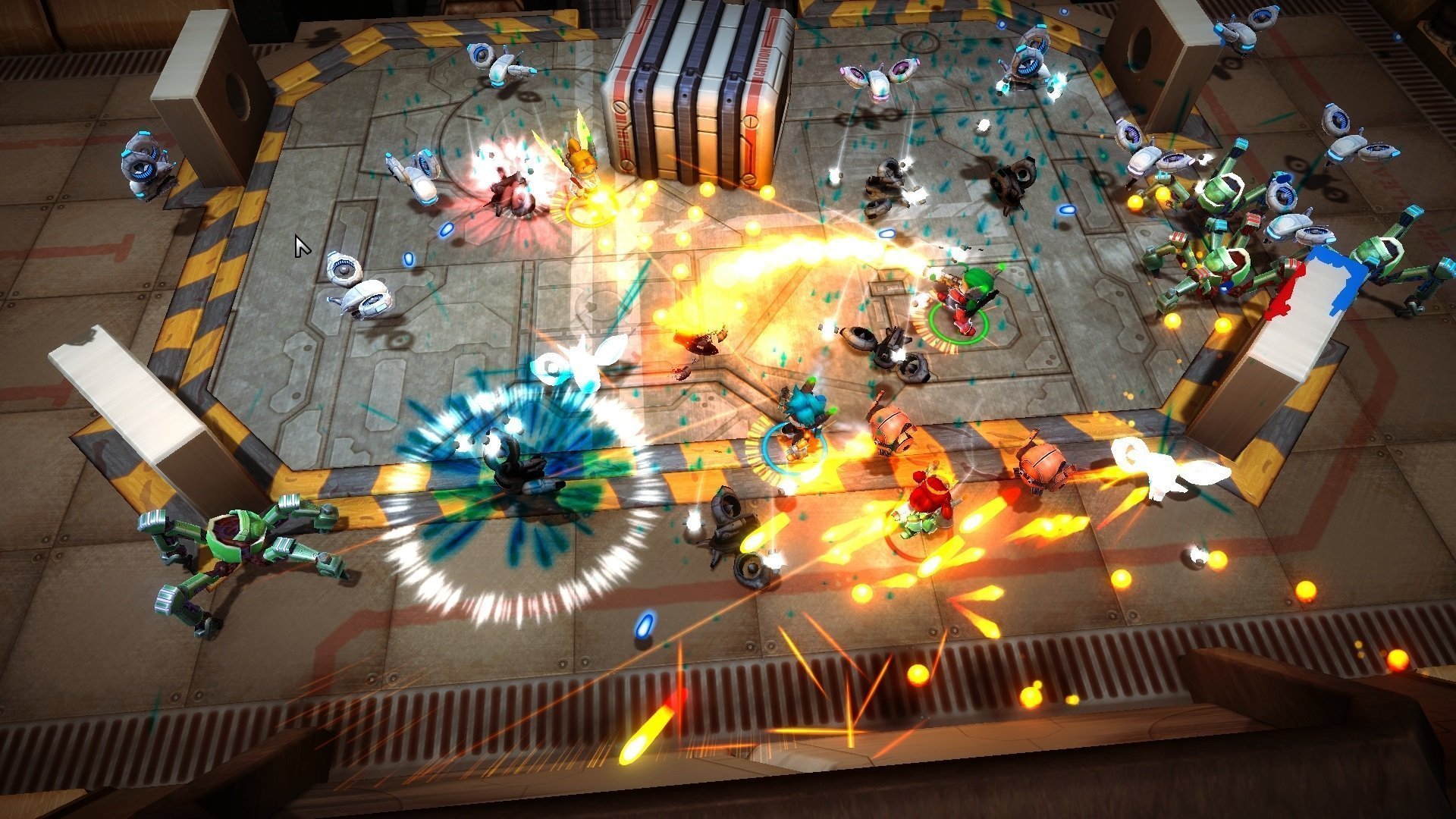 Other return games are showing the benefits of Early Access campaigns. Bearzerkers recently hit Steam after a 2014 Kickstarter campaign (of which it should be noted I am a backer) and is a perfect show floor game, easy to pick up and hilarious to play. Crawl was a game of the show candidate last year and put in another good showing, now into its second year of Early Access the multiplayer dungeon crawler that sees one player controls the hero and the rest control the monsters comes personally recommended by Jerry of Penny Arcade. Swordy has been completely rewritten and has the support of [email protected]; flailing in circles with a huge sword or warhammer is still very amusing.

I’ve already written about two of my favourite games from PAX 2015 — you can check out the full preview of Space Dust Racers here and a profile on Rivalry and the 14 year old who created it here. Both are incredibly fun and represent both ends of the development spectrum, a polished, finely tuned cart racer that has a professional touch to it only industry veterans can provide, and a single school aged developer making a prototype multiplayer sword fighting duel with crazy physics.

Finally, there are the highly recommended games that I unfortunately didn’t get much, if any chance to play. Death Stair, Blockpocalypse and GoatPunks Party all received glowing praise; I’m looking forward to getting my chance to spend more time with them.

Local multiplayer games may not be the most lucrative, but to me they are the most fun experiences video games can provide. Australian developers are absolutely nailing it in this field and judging by the quality and quantity of games on offer those of us who love getting some mates together to stretch the limits of friendship in virtual competition will have plenty to sink their teeth in to in 2016.